The Texas Sprint Racing Series Presented by Texas Barge completed the 2021 season, hosting five events between March to September. Record numbers were welcomed throughout the year for the Superkarts! USA and International Kart Federation regional series, thanks to the support of the many series partners, the multiple race teams, and the many competitors who took part throughout the season. This year’s championship format featured a best four of five rounds, with the competitors worst round dropped from the final point standings to determine the 2021 Texas Sprint Racing Series champions. 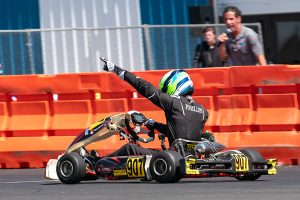 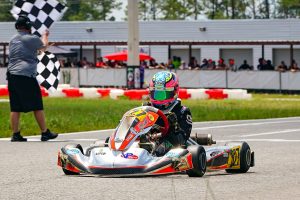 The Exertech KA100 Senior category was the largest division of the 2021 season, averaging over 30 drivers per event and producing some amazing racing. Peyton Phillips saved the best for last, as he was able to secure his first victory at the series finale to earn the series championship. Phillips was on the podium at the opening round and stayed within the steps over the middle stretch. The Fall Finale victory gave Phillips a 49-point advantage for the championship over Josiah Tracy. The Round One winner stood on the podium twice as well, including Round Four. Defending champion Austin Osborne suffered issues at the series finale, ending up third in the standings with one lone podium finish on the season. Adrian Cruz and Alex Stanfield complete the championship top-five. Cruz was runner-up at the final round, with Stanfield one of four different winners on the season with triumph in Round Three. 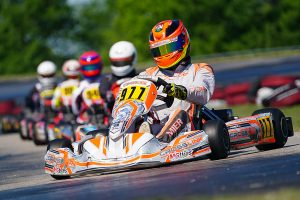 The series welcomes a number of top Junior drivers in the country that compete regularly, including the KA100 Junior by Fullerton Motorsports that also saw four different winners over five rounds. Helio Meza won at Round Three, and was able to record a total of three podium finishes to claim the 2021 series championship. The point margin ended up at 61 points, with Cooper Shipman placing runner-up. The Round Four victor also had three podiums on the season, as did Aden Rudolph, who won twice on the year, finishing 78 points back of Meza. Cole Kleck and Camryn Reed each earned one podium finish on the season, placing fourth and fifth in the final point standings. 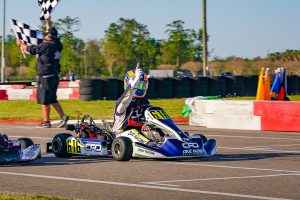 Miguel Mier made it a perfect season in the KA100 Master by Kart Racing Solutions. Mier was able to secure fast time in qualifying, win the Prefinal and Final at all five events on the 2021 calendar. Martin Stone was runner-up in three main events to put himself into the vice-champion position. Defending champion Doug Foxworth stood on the podium twice on the season to end up third in the standings. Edwin Ruiz de Val and Andy Miller complete the championship top-five.

Three wins in five rounds helped Adrian Cruz finish the 2021 season in the 206 Senior by 4T Concrete Pumping division. Cruz won the odd rounds, including the series finale to secure the championship by 30 points over defending champion Ethan Wolfe. Two wins on the season with a total of three podiums was not enough to retain the championship for Wolfe. Zander Rogers, Shawn Kozma and Macon Moore round out the top-five for the 2021 championship standings. 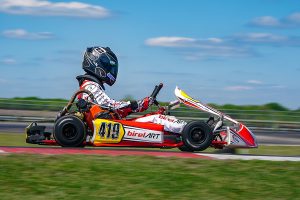 The championship in the 206 Junior by Core Karting category went down to the wire. Philip Winegeart went into the series finale with four podium finishes. In the hunt during the weekend, Winegeart finished fourth in the main event. Caiden Wolfe rode into Amarillo with three wins and four total podiums. While he missed out on the bonus points in qualifying and finished third in the Prefinal, Wolfe secured his fourth victory of the season along with fast lap of the race. When the calculations were final, Winegeart secured the championship by five points over Wolfe. Koen Summers was able to record the third highest point total, just ahead of defending champion Robert Warren Jr. as Alex Pope completed the top-five in the final championship order. 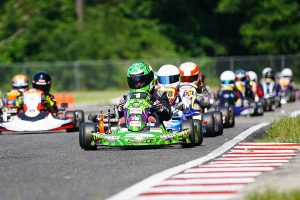 It is an amazing five straight championships for Ragan Saville in the 206 Cadet presented by Saville Electric class. Saville completed his Cadet career with a win at the opening four rounds to secure the championship one event early. The battle for second went down to the wire with Derek Wargo, a podium finisher three times on the season, able to hold off Emmett Eddolls, who won at the series finale, by 43 points. Robert Arana and Tyrone Kemper Jr. completed the top-five for the 2021 season.

Three different drivers won on the season in the Mini Swift by Alan Rudolph Racing Academy, led by Oscar Iliffe. Three wins in a row for Iliffe for Rounds One, Two and Four after missing the third event due to competing overseas. Add in the runner-up at the series finale, and Iliffe was able to lock up the championship by 120 points. Diego Guiot won in Amarillo to end the season strong, finishing vice-champion. Ragan Saville is the third different winner on the season, placing third in the standings. Tyler Roberts had a best finish of third-place, two times on the year to end up fourth in the standings while Santiago Duran was P4 four straight times to help put him fifth in the championship. 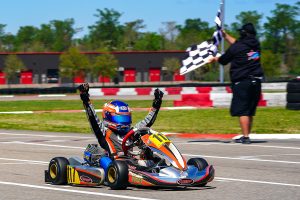 Bobby Klein stood on the podium in four straight events to help him claim the 2021 championship in the Micro Swift category presented by PFX Storm Shelters. Klein won twice, finished runner-up in Round Three, and placed third at the season opener to establish a 30-point advantage for the title. Gage Bailey made it close, winning twice as well on the year including Round Three and Round Five, ending up as vice-champion. Matthew Dukette was on the podium twice on the season to finish the standings in third ahead of Tyrone Kemper Jr. and Nicolas Orbezo. 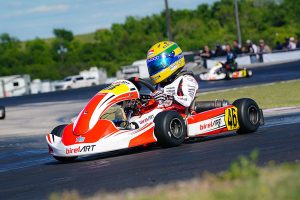 It was a near perfect season for Pasha Ali in the Honda Kid Karts by A&M Excavating class. Ali was runner-up at the opening round of 2021 and then went on to win the final four main events to secure the series championship. Tanner Barsch was the only driver to defeat Ali, placing on the podium three times to finish as the vice-champion. Andrew Anastasio had two podium finishes of his own to finish the standings in third with Noah Gibson and Aloy Steinbrunner completing the top-five for the 2021 championship.

The focus now turns toward the 2022 season, with another five events scheduled for the upcoming year. The facilities include four that were part of the 2021 program, with the series finale location to be announced at a later time. 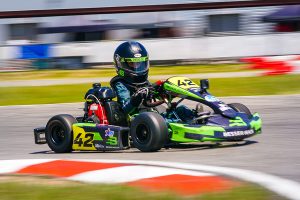 Texas Sprint Racing Series season packages and number reservations are scheduled to open on November 15. The season packages, valued at over $1,200, includes entry to the five events plus one free set of tires to be picked up at the 2022 opener at NOLA – for a purchase of $1,000. The number reservation is only $5 to secure your favorite race number in your specific class. Also on the docket for 2022 is a new partnership with Kart Chaser to broadcast all five events.