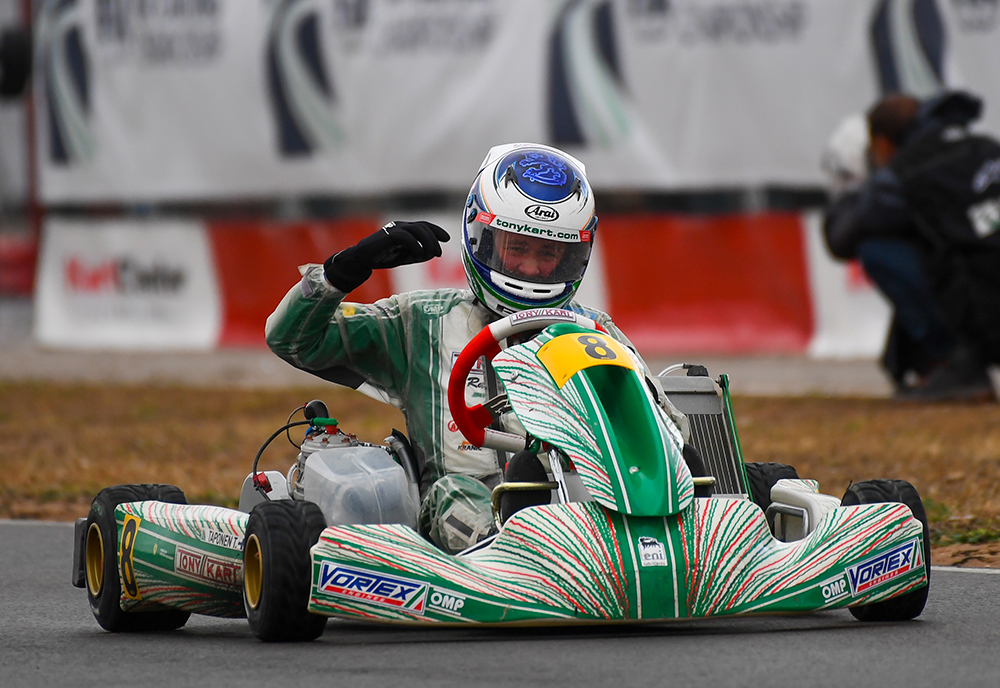 Another historical World success for our Racing Team. After the KZ title obtained last September in Sweden with Noah Milell, this time it’s our Tuukka Taponen who triumphs in the master class of the single-speed karts in the FIA Karting World Championship in Spain.

Once again, the star of our Tony Kart Racing Team shines. In Campillos, Spain, the FIA Karting World Championship 2021, reserved to the OK class, is coloured with green thanks to the excellent performance of our Tony Kart Racer 401R (already in its 2022 graphic design), first in Sunday’s final, and to the power of the DST Vortex engines, the “engine division” of OTK Kart Group. A World double win after the victory in Sweden, last September, in the KZ class, the top of the shifter karts.

Tuukka Taponen is simply extraordinary in the OK final. From the fifth box at the starting grid, the Finnish driver avoids any kind of contact in the tense moments right after the start and manages to climb to third position. Then, in just four laps, he takes the lead and never leaves it: the Finnish driver flies on a wet track, sets the fastest lap time (1’15″517) and establishes an unattainable gap between himself and the second classified driver. A gap which makes clear the shape of his power in a final crowing a perfect weekend making him for the first time a world champion.
Joseph Turney is also a great protagonist of the Campillos final. The British driver, author of two podiums in the qualifying heats, starts from 15th place on the grid, climbs 8 positions and comes close to the Top 5 by a handful of seconds. Juho Valtanen, too, makes a remarkable climb in the standings during the final, with 10 positions gained at the end of the 19 laps entering the Top 10.
Noah Milell, 2021 World Champion of the KZ class with our Racing Team, starts his weekend very well and, despite a +8 in the overall ranking at the end of the qualifying heats, he misses the final by only one position. Bruno Del Pino is definitely fast on his home circuit, but a poor qualifying session compromises the Spanish driver’s final performance: 23 positions gained at the end of the eliminatory heats are not enough for him to enter the final. Alexander Gubenko has the right pace to aim at a good position in the ranking, but his World Championship ends prematurely.

In OKJ category, our Racing Team is on the starting grid of the final with great expectations: with 6 drivers at the starting line, we are the team with the highest number of drivers at the start. During the qualifying heats, Keanu Al Azhari achieves some excellent top 5 positions and qualifies for the final in fourth position, while James Egozi scores a series of four victories on Saturday, to reach the final on Sunday in fifth position. Unfortunately, both are unlucky protagonists at the start: on a difficult track due to the heavy rain, our two drivers hit other rivals, with the American driver forced to retire on lap 2 and the UAE driver out three laps later.
Jan Przyrowski is the best of our drivers in the race, just outside the Top 20 and with 11 positions gained from the start. The Polish driver is clearly grown during the weekend, as proved by the 22 positions gained in the standings between qualifying and eliminatory heats. Oscar Wurz also performs well, having climbed 12 positions in the final. Jimmy Helias and Arthur Dorison, on the other hand, have to stop their final: the former even signs a fast lap in the qualifying heats and has a good chance of finishing in the Top 10, but he is damaged by several collisions at the start; the latter is in the Top 15 at the end of the qualifying practices, but this weekend is not kind to him in terms of luck. After last week’s preparation for the Champions of the Future, Enzo Tarnvanichkul reaches the final, a more than satisfactory result for a rookie with very few races behind him in the OKJ category, which counts more than 100 drivers at the starting grid.
The missed protagonist of the final is Harley Keeble, champion of the WSK Euro Series 2021 with our colours. The British driver does not enter the last heat of the weekend and therefore cannot be admitted to the decisive race. German Foteev is fast in the qualifyings and takes a podium during the eliminatory heats, but he too is excluded from a qualifying heat, preventing him from getting a place on the starting grid of the final. At their second attendance with our team, Alvar Siimesvaara and Reno Francot gather more experience at the end of the Spanish weekend, with good expectations in view of possible future commitments.

After the world weekend, our Tony Kart Racing Team will be back on track on 12th-14th November, on the occasion of the 26th Winter Cup in Lonato, on the South Garda Karting circuit.