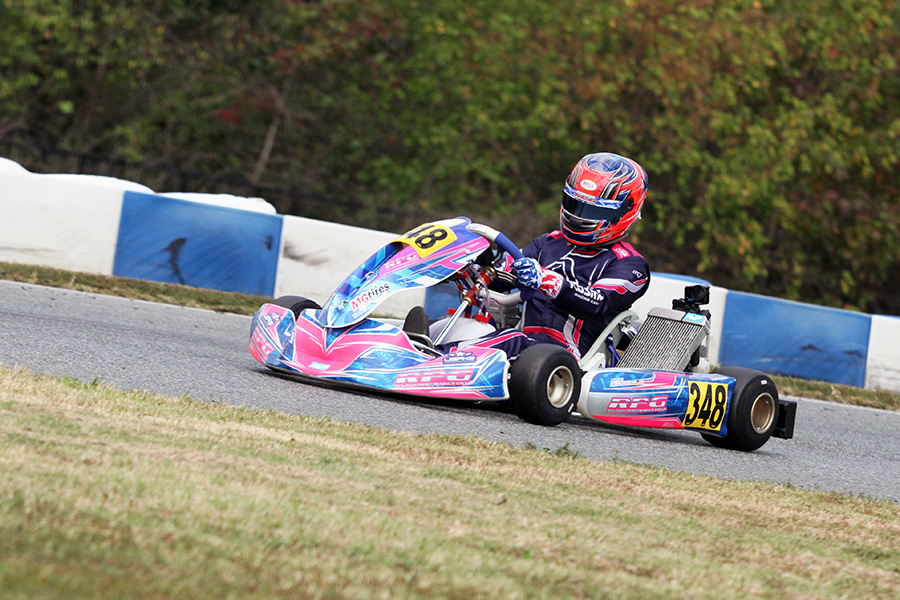 The final rounds of the 2021 season are directly ahead of us, setting up for the heavyweight fight that is the eKartingNews.com TaG Driver Rankings. Over the last 12 months, drivers from across the country battled for victories and podiums. And now, a handful of drivers have the opportunity to finish the season as the top driver of the year. What is ahead are two major events to close out the 2021 season with ROK Vegas this week and the Superkarts! USA SuperNationals 24 in December.

From the beginning of the season, Ryan Norberg (Rolison Performance Group / Kosmic) has held the top spot of the EKN TaG Driver Rankings. The Florida driver is coming off his first USPKS championship, and holds a 108-point advantage heading into the final events. Teammate and 2021 SKUSA Pro Tour champion Hannah Greenemeier sits second. Florida Winter Tour title winner and top rookie of 2021 Connor Zilisch (Team Nitro Kart / Tony Kart) is now in the third position. Zilisch won at every program he competed at and is set to make his Senior debut at the SuperNationals where he won Mini Swift in 2017.

Within reach of the top-three is SKUSA Pro Tour vice-champion Branyon Tiner (Rolison Performance Group / Kosmic). Tiner racked up three podiums in the six rounds, however, was minus a win on the season in X30 competition. The driver from the Lone Star State has wins at the regional level in KA100 Senior competition at the Texas Sprint Racing Series, and could end in the top-three with a solid finish at the SuperNationals. Up five spots to fifth is Pauly Massimino, who moved over to the Ryan Perry Motorsport operation mid-way through the season. The SKUSA SuperNationals 23 KA100 Senior winner ended up on the podium at the SKUSA SummerNationals and at the UPSKS finale in X30 competition to help elevate his position in the EKN Driver Rankings.

Falling to the sixth position is last year’s co-#1 driver Arias Deukmedjian (Trinity Karting Group / Kart Republic). With the 2020 SKUSA Summer Festival from New Castle finally removed, the results based on the last 12 months for Deukmedjian are strong enough finishes to remain in the top-10, as the Florida driver is looking more and more toward open wheel racing in the future. Thomas Annunziata (Mike Doty Racing / Kosmic) continues to elevate his progress, up seven spots to seventh. He landed his first SKUSA Pro Tour podium at the SummerNationals, finishing fifth in the final point standings. Annunziata, however, went podiumless in USPKS competition.

The remainder of the top-10 are making their 2021 debuts in the spotlight positions. The addition of Nate Cicero makes it four Rolison Performance Group / Kosmic drivers in the top-10. Cicero gained his first SKUSA Pro Tour victory at the SummerNationals, finishing the season fourth in the championship standings for a RPG 1-2-3-4. Recently, Cicero was named to the 2022 Mazda Motorsports factory club racing team thanks to his performance at the Spec MX-5 Shootout. The New York pilot is making his temporary circuit debut over the next two months, racing at both ROK Vegas and SuperNationals. Diego Ramos (REM / Kosmic) earned a SKUSA Pro Tour victory at the WinterNationals, and his success at the Florida Winter Tour have elevated him to ninth. Rounding out the top-10 is Canadian Thomas Nepveu, who made the switch to Trinity Karting Group / Kart Republic mid-way through 2021. Nepveu has been bouncing back and forth between karting and the Cooper Tires USF2000 Championship program, where he finished ninth in the standings – second among rookies with a win at Road America. Multiple top-10s at the SummerNationals and the USPKS finale helped to put him in 10th.

Those dropping out of the top-10 include Brandon Jarsocrak (Mike Doty Racing / Kosmic), for the first time since the early days of his move into Senior racing and TaG competition. The four-time USPKS series champion has gone winless in nine Driver Rankings events he has competed in, but continues to remain a threat, only dropping to 11th, and he is poised for an attack at the SuperNationals. Former co-#1 Luca Mars (Trinity Karting Group / Tony Kart) and 2020 SKUSA Pro Tour champion Bryson Morris (Rolison Performance Group / Kosmic) fell out of the top-60. Mars was P2 in August, losing his six-round cycle for the Summer Festival, as did Morris. Both are focused on car programs with Mars at the MX-5 Cup and Morris finishing up his Spec MX-5 factory club program. Neither, as of publishing, are expected to compete at the SuperNationals.

A key stat looking at the next two big events is the fact that over half of the top-50 are expected to be competing at the SKUSA SuperNationals 24, while less than a dozen will be at ROK Vegas this week. 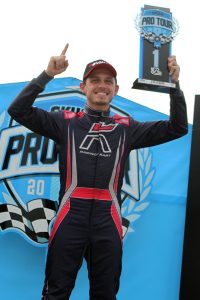 The average finish says it all. It is not often we see a driver with a below 2.0 average finish. Norberg has five wins in the seven races he has toward his Driver Rankings points. Two DNF finishes on the season, one in Utah and one at NCMP, cost him the opportunity for a fifth SKUSA Pro Tour title. He made up for it by claiming his first USPKS crown, based around his seven straight podium finishes after missing the steps during the opening round in Ocala. Norberg only has four previous starts at the SuperNationals, with three top-10 results and a best finish of fifth in 2017. Not quite making the best seven results from the last 12 months is a third-place at the 2020 ROK the RIO event. 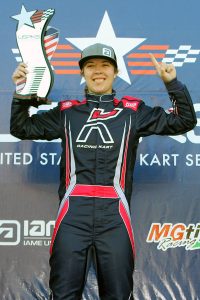 History was made in August when Hannah Greenemeier locked up the X30 Senior championship at the Superkarts! USA Pro Tour, becoming the second female driver to do so, joining Sabre Cook (2012). She was the second female driver (Kathryn Cornell in 2010 – TaG Junior) to win a Pro Tour race after grabbing the win at the SpringNationals, and joined Ashley Rogero as the only other female to win in the USPKS X30 Pro category with victory at the series finale. Those two wins, and her consistency throughout the 2021 season have her in a fight with RPG teammate for the Driver of the Year in TaG honor. While she will be focused on the Shifter ROK category at ROK Vegas, the SuperNationals 24 will be her opportunity to take that top position. 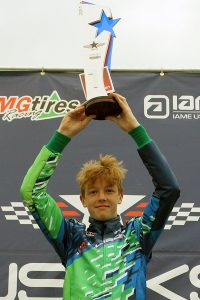 There is no doubt about the talent within Connor Zilisch. The 2020 FIA Karting Academy champion beat drivers from around the world to close out his Junior career, and made his Senior rookie season in 2021 a memorable one. Zilisch secured the Florida Winter Tour championship with three straight wins, won at the SKUSA Winter Series, and added wins at the USPKS and SKUSA Pro Tour. A couple of DNFs at each program, including missing the SummerNationals, hampered his opportunity to claim a championship in either program. He did finish vice-champion in the USPKS standings. The one thing Zilisch has over the top two, a victory at the SuperNationals, via 2017 in Mini Swift.