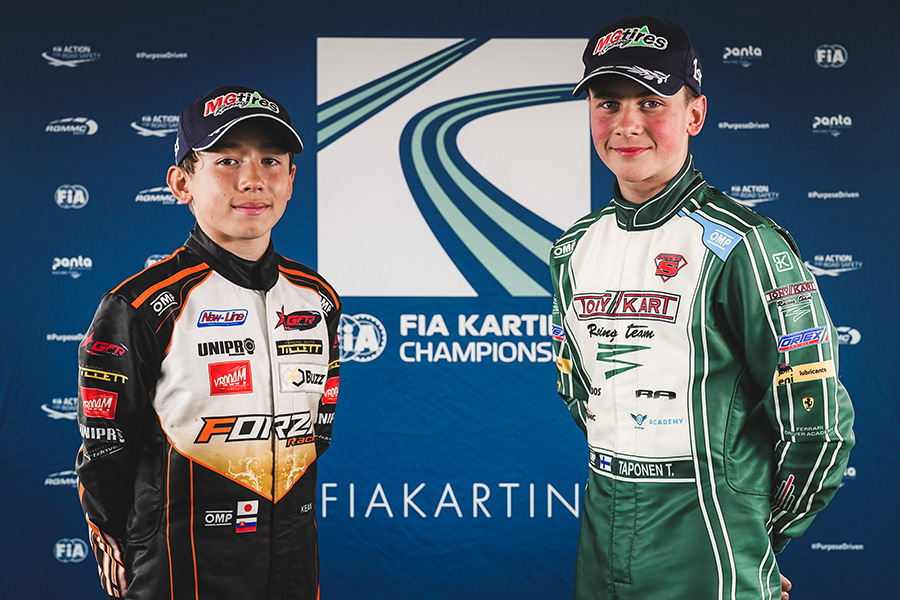 The wet conditions on the Campillos circuit on Sunday were an important element in the running of the 2021 FIA Karting World Championship – OK & Junior. The last Qualifying Heats had already brought some surprises, but the Finals were full of twists and turns before rewarding Japan’s Kean Nakamura Berta in Junior and Finland’s Tuukka Taponen in OK.

For the third consecutive year, the FIA Karting World Championship – OK & Junior was rained out. In Campillos, the rain was not too heavy, but the track remained wet throughout Sunday. Both Finals were run on MG Tires rain tyres. Once again, karting at its highest level offered an incomparable spectacle. The control of the drivers in these tricky conditions as well as the ability of the teams to make the right technical choices, especially concerning the tyre pressure, enabled us to witness an intense competition and the crowning of the two brilliant World Champions. 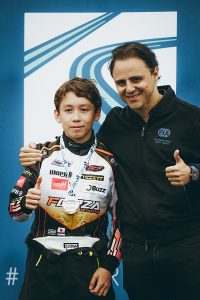 The start of the Final was given after two unsuccessful attempts on a slippery track. Amongst the many early exits, Egozi retired on the second lap. Walther and Stolcermanis battled for first place. Slater quickly moved up to fifth then moved up to third place on lap 3. Determined, he attacked Walther and then Stolcermanis to take 1st place on the sixth of the 16 laps, a significant improvement of 12 places. Nakamura followed the same path to move up to second place on lap 10. From there Slater stopped increasing his lead to 4,4”. Stolcermanis and Walther were still fighting for third position, but they were not protected from Anatoly Khavalkin (RAF – Parolin/TM Racing/MG) who came back to third with three laps to go. Slater must have realised that he would be penalised because of his spoiler that had come off in the fight and was desperately trying to push his advantage beyond 5″ to retain the title. Unfortunately for him, this did not happen and Nakamura’s second place finish turned into a world title win by 0.256″. The disappointment for Slater, who had given his all in a tough challenge, was sad to see. On the contrary, Nakamura was exultant to bring home a World Junior Championship title to his country thanks to the Forza Racing team.

Taponen the faultless winner of the OK Final 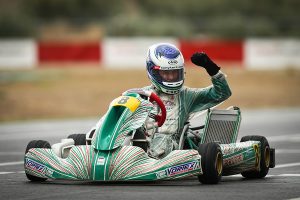 At the time of the Final, the track remained wet with light rain. Camara rushed to the front of the race ahead of Ugochukwu, Taponen and Arvid Lindblad (GBR – KR/IAME/MG). Pedersen and Gomez were already behind. Camara was then slower and Taponen quickly joined him to take the lead on lap five, followed by Lindblad on the next lap. Camara retired three laps later. Shortly after the halfway point, Ugochukwu had to give up third place to Luigi Coluccio (ITA – Kosmic/Vortex/MG), who had set a very good pace, while Nikola Tsolov (BGR – KR/IAME/MG) moved into the top five. Taponen had a great race right to the end and gave the Tony Kart Racing Team its second world crown of the year after the KZ title won by Noah Milell (SWE) in Sweden. Lindblad crossed the finish line 7” later, but his spoiler, which had been unhooked since the formation lap, cost him a 5” penalty and second place went to Coluccio. Ugochukwu finished fourth, well ahead of Tsolov.

The results of the Campillos competition can be found on the official FIA Karting Championship app for mobile devices and on the website.

2020 FIA Karting European Junior Champion Ugo Ugochukwu was the lone representative from the United States in OK. Ugo showed the pace throughout the weekend in the heat races, winning three of the four to secure the pole position for the Final. The change from dry to wet slowed his pace, losing the top spot on the opening lap and falling down to the fourth position, one step off the podium.

Things looked to be in favor of USA driver James Egozi, who finished Saturday’s action with four heat race wins. An off-track excursion in his final heat Sunday morning dropped him down the order, and put him fifth on the grid for the Final. That placed him right in the blender for the start in wet conditions, as he fell down the order and retired after just one lap. Leading the way for the USA was Kai Sorensen (Forza Racing), starting 24th and working his way up to the 11th position. Jamaican Alex Powell (KR Motorsport) started inside the top-10, finished sixth, but was given a 15-second penalty for pushback bumper and causing an incident to finish P14. Former Challenge of the Americas champion Enzo Deligny (FRA) started 20th on his Parolin Motorsport entry, but was shuffled back toward the tail of the field early and ended up 25th. Those from North America not making the Final included Matias Orjuela (Parolin Motorsport) 38th in points, Sebastian NG (CRG Racing Team) from Panama was 72nd in points, and Caleb Campbell (Canada) 100th in points.