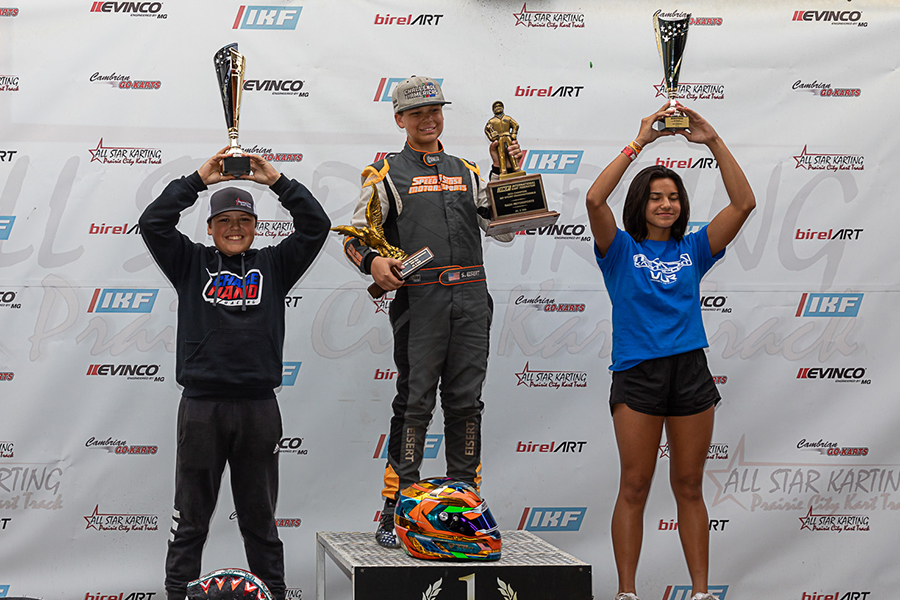 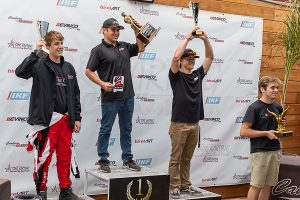 The 2021 edition of the International Kart Federation Sprint GrandNationals were contested on the October 15-17 weekend at the Prairie City Kart Track. The circuit in Rancho Cordova, California has been a gem of Northern California karting, and welcomed Briggs & Stratton and IAME racers from all over the western half of the country to compete in nine categories.

All drivers were competing for one of the most coveted trophies in the sport, the IKF Duffy awarded to all class winners on the weekend. Since 1976, winners at the IKF GrandNationals are presented with the ‘Duffy’ trophy, named after Frank ‘Duffy’ Livingstone. Duffy was life-long karting member as a driver, mechanic, board member and past IKF president, along with being among the original innovators for the sport of karting. It is the Duffy trophy that drivers seek, along with the Screaming Eagle presented to the top qualifier in each category. 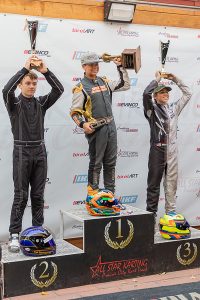 “The IKF wants to thank the Durbin’s for putting on such a great event,” stated Neal Strickland of the International Kart Federation. “The positive energy that the those in attendance and the amazing staff at Prairie City gave off was amazing from the first step into the facility, which continued on track. It was like a karting event broke out during a family reunion.”

The 206 Senior presented by Nevada Kart Sport was the largest class of the weekend, featuring 26 drivers. Four drivers were separated by only eight hundredths of a second in qualifying on Saturday morning. Boden Barnwell led the way with a 49.029-second lap over Deano Pinten, Tyler Agan and Sophia Storey. Barnwell led all 14 laps of Heat #1 for the race win with Agan working past Pinten for third. Agan continued moving forward in Heat #2, jumping out to the lead on the opening lap and led wire-to-wire. Barnwell, despite posting fast lap of the race, was shuffled back to fifth at the end of the race. Heat #3 was Pinten’s time at the front, grabbing the position from Agan at the halfway point and holding on at the line for the win and the pole position for the Final. The first 17 laps of the main event were paced by Pinten before the fireworks began. Agan made his move for the lead before Storey jumped out to the point to lead a few circuits until the white flag lap. Storey ended up off the track during the final circuit, and Agan regained the top spot, reaching the checkered flag first. Colby Romero drove from ninth to second with Pinten crossing the line in third. Pinten was penalized 10 seconds for contact, thus dropping him to ninth. That promoted Hunter Kelly, who started 17th, up to the third spot with Matthew Winfrey and David Vasquez completing the top-five. 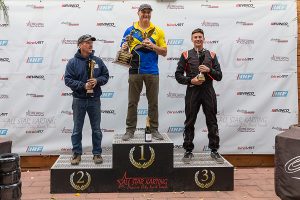 Three categories were swept on the weekend with 206 Junior presented by Nash Motorsportz among them, featuring Stephen Eisert at the top. Eisert cleared the 20-driver field by four tenths of a second in qualifying before leading all 14 laps of the opening two heat races. He was shuffled back to fourth at the start of Heat #3 before driving back to the top spot by lap four. Eisert went on to win the race, securing the pole position for the main event. With fast laps of the race, Eisert led all 24 laps of the Final to establish a seven-second advantage to take home the Duffy. Trenten Helie won the battle for second over Jessynta Taylor. Matthew Fecko had hard charger of the race, advancing 10 spots to fourth with Giovanni Medina in fifth. 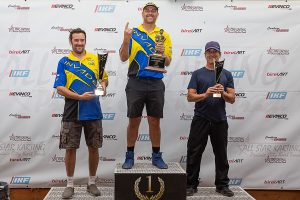 Eisert was able to complete the sweep in a second category, leading the way on the weekend in the Racer Motorsports KA100 Junior class. Eisert recorded a lap of 44.766-seconds to post fast time in the qualifying session. He went unchallenged in all three heat races to lead every lap in each. Starting from the pole position, Eisert went wire-to-wire in the Final and on the event to clam a second Duffy trophy on the weekend. Valentino Garbarino was a close second with Preston Lambert in third. Ethan Booher improved three spots to fourth with Jessynta Taylor earning the fifth-place position. 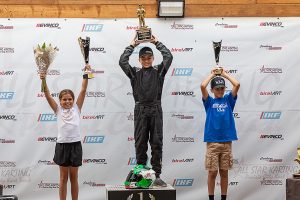 The 206 Grand Master by Thomas Forgarty Winery was the other Briggs & Stratton division to be swept on the weekend. Leading the 14-driver field in qualifying was Joe Senna, posting a lap of 50.439-seconds, quicker than six tenths to anyone else. Senna went on cruise control through the three heat races, leading all three wire-to-wire to claim the pole position for the Final. The 22-lap main event was all Senna as he led the entire distance to a 2.7-second margin of victory. Tom Agan posted fast lap of the race in his runner-up performance with Frank Chavez in third. Chris Britton and Eric Sidebotham rounded out the top-five.

It was a near sweep in the Cole Nelson Racing 206 Master class. The top-four in qualifying was separated by only 97 thousandths with Curtis Morte’s lap of 50.618 the best of the session ahead of Brandon Walsh, Michael Ting and Douglas Booher. Morte led the opening five laps of Heat #1 until Walsh took control. He led the remainder of the race for the win as Morte fell to third behind Booher. Walsh went on to lead all 12 laps of both Heat #2 and Heat #3. It was the same in the 22-lap Final with Walsh showing the way the entire distance to claim the Duffy trophy. Brian Gallagher qualified 13th and worked his way forward through each heat, improving three spots in the Final for the runner-up position. Booher was third with Morte in fourth with fast lap honors going to fifth place finisher Josh Veloz. 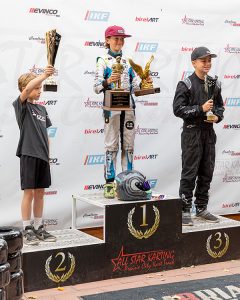 Texas driver Ragan Saville was able to take back a Duffy trophy to the Lone Star State with victory in the 206 Cadet presented by Speedsense Motorsports. Only 93 thousandths separated the top-four in qualifying with Saville leading the way with a 49.690-second lap. Gabby Guidera, Giuseppe Guidera and Cason Hodge complete the fast four. Saville took the win in the opening two heat races but was challenged in Heat #3. He was shuffled back to fifth on the opening circuit, but drove his way back to the point by lap nine, going on to the provisional win. Saville was penalized two positions for passing under yellow, giving the race win to Giuseppe with Gabby moved up to second. Saville settled into the third spot during much of the Final with the Guidera duo holding the top two spots. Giuseppe led the opening nine laps before Gabby took control. It was lap 15 when Saville made his move, working past Giuseppe first and then Gabby on lap 19. From there, Saville led the remainder of the race for the victory. Gabby drove to second, holding off a charging Mikael Avanesian with Giuseppe in fourth. Michael McGaughy rounded out the top-five. 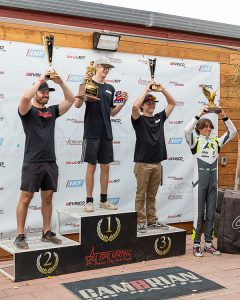 Jackson Glendenning completed a SoCal invasion into NorCal with a victory in the Leading Edge Motorsports Mini Swift class. Glendenning was able to post a 47.128-second lap to lead the timed session, edging out Texan Ragan Saville by 76 thousandths. Saville was able to come away with the win in Heat #1 and Heat #2. Jackson came back with a last lap pass for the win in Heat #3 to steal away the main event pole position. The action turned up quick in the Final with Cypress Andruss putting himself into the early. Glendenning was able to reclaim the top spot on lap seven, and with fast laps of the race, drove away to a five-second victory. Michael McGaughy won the battle for second late in the race with Saville in third. Andruss ended up fourth with Matteo Quinto placing fifth.

The West Coast Motorsports KA100 Senior category saw two drivers control the top spot throughout the weekend. Kyriakos Sioukas set fast time in qualifying with a 44.238-second lap time to clear the 15-driver field by two tenths of a second. Sioukas went wire-to-wire in the opening heat race, but had to retire from the event due to a rib injury. This opened up the door for Aiden Kempf, who led all 14 laps of Heat #2 and Heat #3. Kempf continued his run into the Final, showing the way the entire 24-lap distance, driving to a four-second advantage at the checkered flag for the victory. Dylan Albiani was second with Hunter Kelly third, recording fast lap of the race. Dylan Wilkins was the hard charger of the race, up seven spots to fourth as Gino Sandoval completed the top-five. 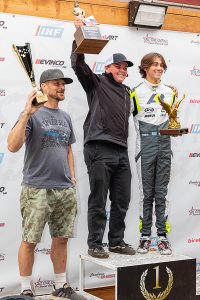 The ninth category added to the event was a local option division, with the Prairie City Kart Track including 80 Shifter presented by Big Z Jerkey Company. Eleven drivers battled on the weekend, beginning with Kyriakos Sioukas earning fast time in qualifying, laying down a 43.985-second lap. Seth Huntley stepped up the pace in Heat #1, going on to score the win. Sioukas, who finished second, retired from the event after the opening heat due to a rib injury. Huntley went unchallenged the rest of the event, winning the final two heat races and leading all 24 laps to earn the Duffy. Brandon Brewer drove to second with Nick Chivello earning hard charger honors in third, advancing up six spots. Charlette Cheung and Shaun Noll finished fourth and fifth.