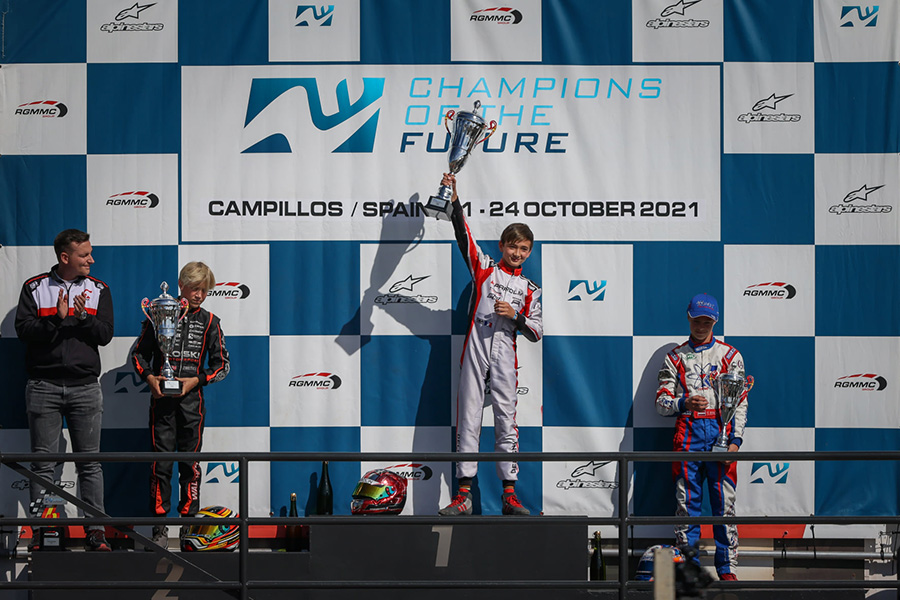 The final round of this year’s Champions of the Future series took place in the sunny Campillos, on the South of Spain, next to Malaga. A record number of drivers took part in the event, with over 60 OK drivers in attendance and the Juniors even exceeding 100 drivers!

The OK category was absolutely dominated by Nikola Tsolov from the Qualifying Practice all the way till the final, with the Bulgarian talent being practically unbeatable. In Junior it looked to be a similar case with David Walther, but in the final Enzo Deligny found that little extra necessary to clinch the victory! 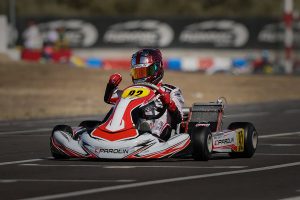 The Junior field recorded the highest number of drivers in a single category in the series’ history, so many that it had to be split into four qualifying groups for the first time. From the first group however, it was clear that David Walther (Koski Motorsport) and Maxim Rehm (Ricky Flynn Motorsport) had set lap times that would be very difficult to beat. Due to the position system however, second place would go to Tomas Stolcermanis (Energy Corse) and third to Jan Przyrowsi (Tony Kart Racing team).

Walther’s blistering speed continued in the prefinal with one more win, but Deligny made another three places to come breathing down his neck. Stolcermanis and Rehm finished third and fourth.

Deligny showed his intentions in the final, quickly overpowering Walther and taking the lead, to drive to victory, while Stolcermanis once again finished third to complete the podium! The big surprises of the race were outside the top-10, where Anatholy Khavalkin (Parolin Motorsport) made up 23 positions from his starting position to finish 12th and right behind him Ean Eyckmans (Kosmic Racing Department) made up 18 places to 13th. 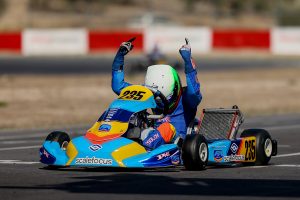 The biggest surprise from the OK category was the absence of Kimi Antonelli, the Italian having moved to Formula 4 and being unable to defend his championship lead. That left Arvid Lindblad (KR Motorsport), Joe Turney (Tony Kart Racing team) and Rafael Camara (KR Motorsport) right behind him in the standings as the favorites! However, it was Nikola Tsolov (DPK Racing) who got the pole position, with Camara second and Gabriel Gomez (CRG Racing Team) making a surprise third place!

In the qualifying heats Tsolov kept setting the benchmark, with camara maintaining second, but Tymoteusz Kucharczyk (BirelArt Racing) taking third. Camara’s title rivals in the meantime, Lindblad and Turney were left making up ground from 12th to 6th place and from 19th to 17th respectively!

Tsolov continued his streak in the prefinal, but it was Norton Andreasson (Ward Racing) who took second place ahead of Camara. The final was one more demonstration of Tsolov’s dominance who went from qualifying to final on the top step. Camara regained second, and it was Lindblad who made a great 5-place comeback to get back on the podium!

Slater and Camara are the Champions!

Slater, due to his great comeback in the final, managed to overtake Kutskov for the title, with Kutskov second and Popov third. The three had such lead in the points that they were able to maintain the top-3 in the championship despite a difficult race where all main contenders qualified far outside the top-10.

In OK, Camara’s strong performance helped him overtake Lindblad for the titles, the latter being on damage limitation after a bad qualifying, while third place went to Tsolov.

The Champions of the Future follows a long tradition of RGMMC productions who have invested in top-level media coverage with live streaming through the weekend, and daily interview and highlights.

All races, as well as interviews and highlights, were made available on the RGMMC Productions Youtube channel. More information and complete results can always be found on the Champions of the Future Series official website www.championskarting.com, the RGMMC Group website www.rgmmc.com, and the Champions of the Future Facebook and Instagram pages with the handle @championskarting.

A total of eight drivers competed in the Junior division, alongside race winner Enzo Deligny. A former Challenge of the Americas champion, Deligny secured his first European victory heading into the FIA Karting World Championships. Another recent winner, James Egozi (Tony Kart Racing Team) improved nine spots to finish 14th. SKUSA Winter Series Mini champion Matias Orjuela (Parolin Motorsport) continues to show well in his Junior debut races, advancing 10 positions to 17th in the Final. Kai Sorensen (Forza Racing) started inside the top-10, but retired after the opening lap due to contact. Jamaican Alex Powell (KR Motorsport) finished outside just outside the top-10 but was removed from the results for coming in underweight.

A bad heat race for USA driver Ugo Ugochukwu (KR Motorsport) in OK dropped him down to 26th in heat points after qualifying 10th. Ugo fell to 31st in the Prefinal, but fought his way forward to 20th in the Final.