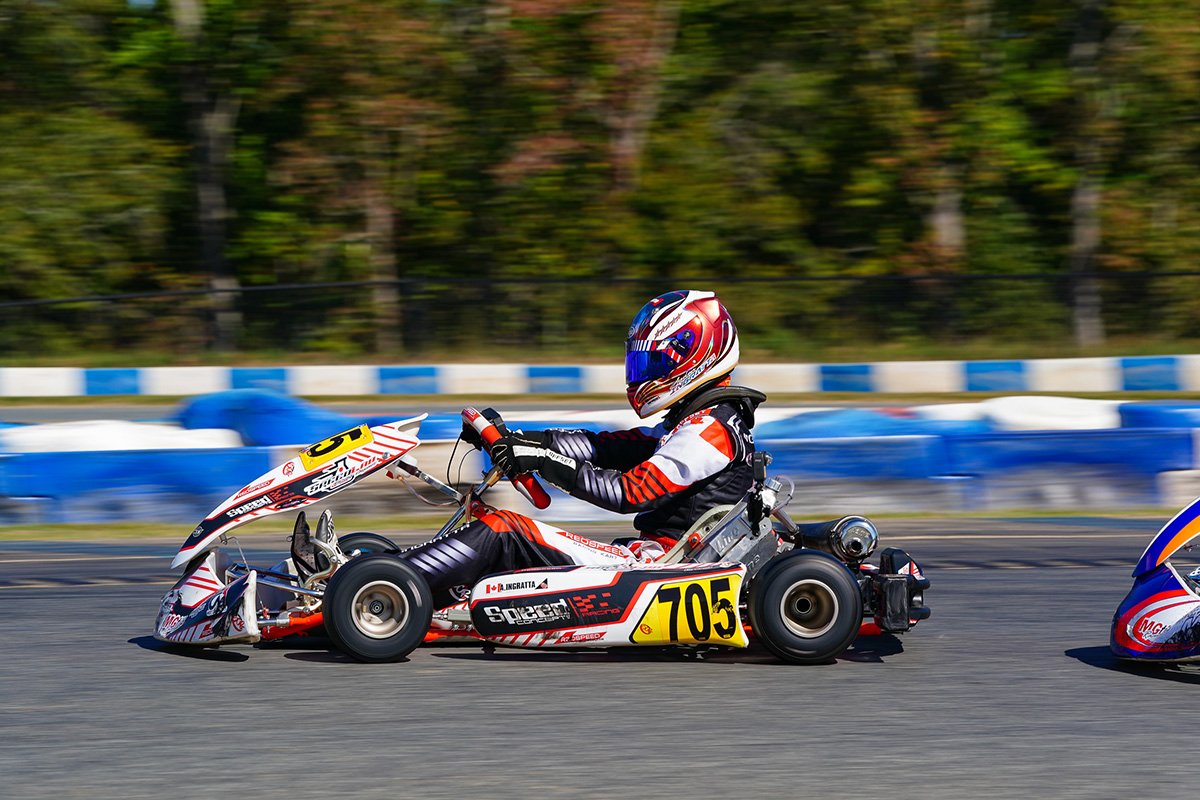 The 2021 United States Pro Kart Series (USPKS) came to a close this past weekend and Ayden Ingratta did so with a pair of top-five finishes and one podium result. Entering the weekend with a shot at the USPKS National Championship, the Canadian driver did what he could but came up just a few points short in the end. Taking on the challenging, yet fast GoPro Motorplex in Mooresville, North Carolina, Ingratta finished fifth on Saturday and leveled up on Sunday to cross the line in second.

With the championship on the line, Ingratta never ran outside the top-five in the first day of wheel-to-wheel competition. After qualifying in the third position, the Speed Concepts Racing driver fell to fourth in the prefinal before advancing back to P3 and what he though was a podium result in the day’s final. Following the race and with a post-race push back bumper penalty, Ingratta was relegated from third to fifth on the results sheets.

“It was disappointing to lose two positions and some valuable championship points but those are the rules, and we will be back tomorrow to get those points back,” explained Ingratta. “Thank you to Speed Concepts Racing and Speed Lab Engines for the support and awesome horsepower.”

Entering the weekend nine points to the good in the championship battle, Sunday saw the Canadian driver three points behind the leader based on Saturday’s official results as he secured the outside row two starting position for the prefinal after earning the fourth quickest lap of the session. In the prefinal, Ingratta drove to the front of the field and was the first driver to receive the checkered flag, but a post-race penalty relegated him back to a P3 finish for the prefinal.

With the championship on the line, Ingratta immediately worked his way forward and took the lead early in the main event. With his main championship rivals lock step behind him on track, the high-speed tactical match was in full effect. Progressing through the long main event, Ingratta eventually finished in the second position, coming up a few markers short of the USPKS National Championship.

Ingratta added, “I gave it everything I had. I went to defend on the final lap and in hindsight, maybe I shouldn’t have. There will be another chance to win a championship in the future but for now, I will shift my focus to the next event and look to stand atop the podium.”

Finishing second in the USPKS X30 Pro Junior championship, Ayden Ingratta won a ticket to the IAME Grand National Finals that will be held in France to represent Team USA.