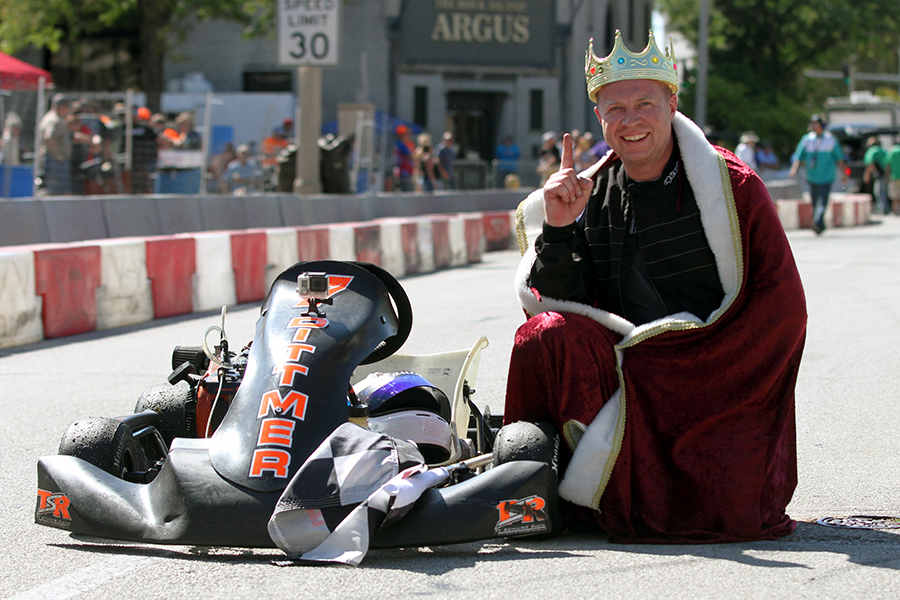 2021 marked the return of the Xtream Rock Island Grand Prix following the 2020 cancellation due to the COVID-19 pandemic. It was not the first time the event missed a year since its debut in 1994, which has welcomed thousands of karters from all over the world to the Quad Cities area and the Rock Island, Illinois streets. It was a welcomed return with over 200 entries, and the majority competing in the Briggs & Stratton 206 categories. 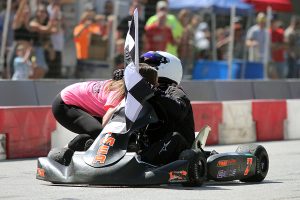 Dittmer earned his first RIGP victory in seven years with the checkered flag in Briggs 206 Heavy, presented to him by his wife Christine (Photo: EKN)

Among those in competing in four of the Briggs & Stratton 206 categories was longtime RIGP competitor Michael Dittmer. A Quad Cities native, living in Davenport, Iowa, entered the weekend with eight previous victories at the Rock Island Grand Prix. His last was in 2014, when he won both Clone Medium and Clone Heavy to build up his win total to eight at the RIGP. Dittmer was entered in both Briggs 206 Heavy classes, along with Briggs 206 Masters and the new King of the Rock Briggs 206 division.

Up first in the order was Heavy 1 – the largest category on the weekend with 29 drivers, beginning with Dittmer finishing seventh in the heat race. He was shuffled outside the top-10 early, fighting back to finish ninth. Masters was next in the running order, with Dittmer finishing sixth in the heat race. Contact at the start of the Final with the two-sided LeMans style format brought on contact, with another kart driving over the right rear of the kart. It put him on the sidelines for the entire race, needing to repair the damage for the next two main events.

The Briggs 206 Heavy 2 main event was next, with Dittmer coming off a P5 in the heat race on Saturday. He kept himself inside the top-five throughout the 15-lap Final, running second early on. Michael was third with a few laps remaining when the opportunity opened up to take over second by the white flag. With a great run and bump draft from former winner Jeff Dolian, Dittmer was into the lead going into turn two. That was the winning move as Dittmer reached the checkered flag first, leading just the final few corners to claim his first RIGP victory since 2014. 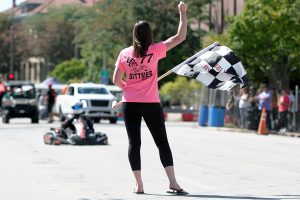 Christine Dittmer presenting her husband Michael Dittmre with the checkered flag for winning the King of the Rock Briggs 206 (Photo: EKN)

The joy of triumph carried over into the final race of the weekend for Dittmer, the inaugural King of the Rock Briggs 206 division. He advanced eight spots in the Heat race on Saturday to finish 10th. Starting inside the top-10, Dittmer was into the top-five on the opening lap. It was not until the final few laps that he began moving forward. He was into the third spot with two laps remaining, running behind multi-time RIGP winner Tony Neilson and Justin Wishard. Coming to the white flag, Dittmer dove inside Wishard at the tricky right-hand turn four. With Neilson holding a sizable lead, Dittmer received a solid bump draft from former RIGP winner Matt Pewe. The two closed up on Neilson by the exit of turn two. Dittmer set up for a similar move in turn four, completing the pass and leading the final two corners to claim the inaugural King of the Rock Briggs 206 crown. Both victories, Dittmer led one lap…the last lap.

The two victories on the weekend brought his Rock Island Grand Prix total to 10, spanning 21 years. His first came in Junior Briggs back in 2000. He ripped off four straight victories in the Yamaha SuperCan Heavy category from 2006-2009 before adding a fifth in 2013. As mentioned earlier, his last victory at RIGP in 2014 when he won both Clone Medium and Clone Heavy.

The Rock Island Grand Prix was a highlight for the 2021 season, which has been very successful for the Comet Eagle driver. Dittmer secured the Cup Karts North America North Division championship, placing on the podium in seven of the eight rounds, including four victories in the Masters class. The season began with victory at the CKNA Spring Nationals event at the Charlotte Motor Speedway. Dittmer pulled off the CKNA Triple Crown with victory at the CKNA Grand Nationals 6 at the New Castle Motorsports Park. He will close out the 2021 season with the Halloween Grand Prix in Norway, Illinois before looking to the 2022 season. He plans to defend both victories and championship at the CKNA program. 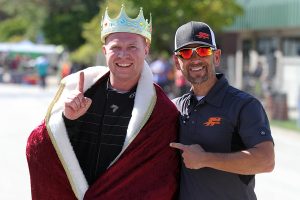 Chassis: Comet Eagle
Engine/Engine Builder: Briggs 206 / TSR – Tyler Schurr
Sponsors: Kart, Engine, Tires and Entries are sponsored by my wife Christine. Trailer is sponsor by my parents. Trak Wraps for my decals.
Series You Compete In: Cup Karts North America, Rock Island Grand Prix, Quincy Grand Prix
Years Karting: 28
How did you get started in karting? My parents signed me up for baseball when I was 8 and I was terrible. Got to play left bench. One of the other kids on the team also raced karts. I talked dad into going to watch and then decided karting might be a better fit for me.
What has been the high point in your racing career? I have a couple of high points. Winning at the WKA Manufacturers Cup Series in Charlotte 2003, multiple years of wins at RIGP, and winning Battle at the Brickyard.
What are your goals in racing? To stay in karts and be competitive to be a front runner until one or both of my kids want to get in the seat and start racing.
In a few words, how would you describe your driving style? Not too aggressive, consistent and try to be well calculated with the moves I make.
Funniest moment at the race track? It was not funny as it happened, but racing in Jacksonville for WKA Man. Cup in 1999 or 2000, I dropped the right rear off at the end of the long straight, spun me around and I hit a chain link fence that pinned me up against the steering wheel. Turned into a lot of jokes in the pits.

What do you do when not at the track? When not at the track and not working, I work on karts and keep busy with kids activities.
What are your goals outside of karting? To make sure my family is happy and to be able to help my kids achieve their goals in life.
What type of street car do you drive? 2018 High Country Silverado
What type of street car would you like to drive? Porsche 911
What are your pet peeves or things that irritate you? People expecting high results without putting in effort into achieving the results.
What do you think could be done to improve the sport of karting? I don’t think we should have as many practice days as race days in a weekend. Unofficial practice days have forced people to spend more days on the road.
What are your favorite aspects about the sport of karting? I love the friendly rivalry and family-oriented community around the track. It is great to see how competitors will help each other out.