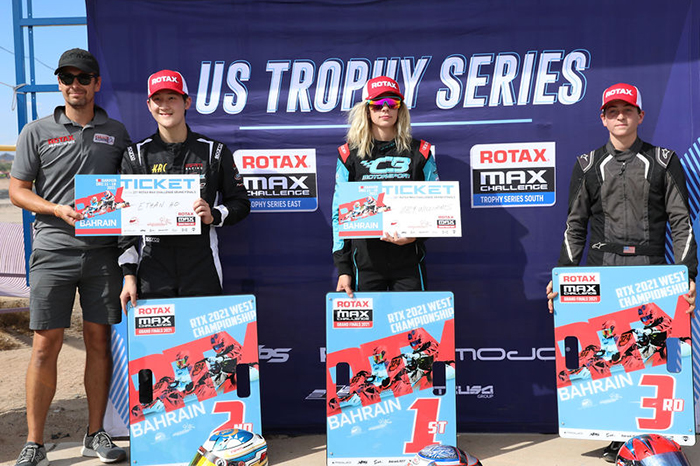 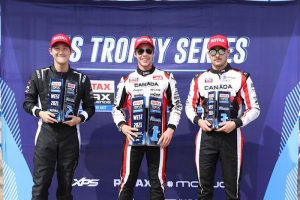 The inaugural Rotax USA Trophy Series West program closed out on the October 1-3 weekend at the Phoenix Kart Racing Association facility. The championship began in Colorado at the end of August with the opening round and completed with two full days of racing at the Glendale, Arizona facility. On the line for the weekend, aside from the championship title for the five categories, were tickets to the 2021 Rotax Max Challenge Grand Finals in Bahrain.

The Senior Max category featured the largest field with 15 drivers, also rewarding the race winner with a ticket to the Rotax Grand Finals. The weekend was swept by Canadian Griffin Dowler. It was Canada 1-2 with Dowler setting fast time in qualifying with a 45.674 seconds laptime, edging out Matthew Taskinen. They held their positions through the opening heat race, duplicating the results in Heat #2 with Taskinen recording fast time. California driver Ethan Ho ran third, but gained one spot on the opening circuit of the Final. He trailed Dowler the entire 20-lap distance, with Griffin earning the victory and the RMCGF ticket in DD2 competition. Ho settled for second with Taskinen putting two Canadians on the podium. David Williams ran fourth with Colorado winner Macy Williams in fifth. 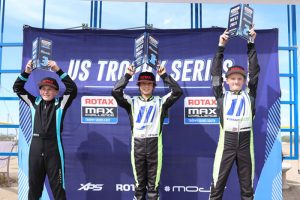 The points calculated over the two rounds completed with Macy Williams (559) earning the series championship by 12 points ahead of Ethan Ho (547). David Williams (531) completed the title podium in third, only 27 points out of first. For finishing second in the championship standings, Ethan Ho was presented a ticket to the RMCGF in the DD2 category.

Junior Max was another sweep on the weekend with Cooper O’Clair able to defend his home track against the eight other drivers in the category. O’Clair was able to clear the field by over one tenth with a 45.933-second lap. Colorado winner Alex McPherson took over the lead early in Heat #1 before O’Clair took back the spot, going on to win by two seconds. Cooper led all 14 laps in Heat #2 to retain the pole position for the Final. Fast laps of the 20-lap main event allowed O’Clair to pull away to a five-second advantage for the victory. McPherson ran second, with Jonathan Schwyn completing the podium. Joelle Lewis advanced four spots to fourth with Giovanni Santora in fifth. 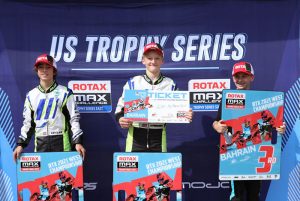 The final standings ended with the top two drivers separated by only three points with McPherson (593) earning the title and the RMCGF ticket over O’Clair (590). Schwyn completed the standings in third.

One driver familiar with the Rotax Grand Finals is nine-time Team USA driver Derek Wang. After sweeping the action in Colorado, Wang did the same in Phoenix for the Masters Max title. A 46.875 seconds lap time was quickest in qualifying for Wang, as he went on to lead every lap of the two heat races, and posting fast time in both runs. The main event ended the perfect score for Wang, leading all 20 laps with fast lap honors to secure the victory by 10 seconds. Christopher Mann was second with Antonio Williams in third. Jerry Pitts and Rene Bine completed the top-five. 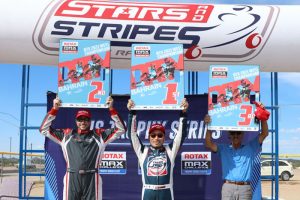 A perfect score of 620 points put Wang on top of the final championship standings, giving him his tenth time to be part of Team USA. Mann (543) was second and Bine (487) earning third.

Mini Max division provided a great battle all weekend long. Kyle Drysdale began the event as the top qualifier, edging out Gavin Whitt by 64 thousandths with a 48.851-second lap. An issue for Drysdale put him on the sidelines at the start of Heat #1 as Colorado runner-up Alexander Jacoby led majority of the shortened seven lap race for the race win. Drysdale was able to bounce back in Heat #2, climbing forward and recording fast lap of the race, but came up one spot short of the win as Alexander Chartier came away with the top spot. The 16-lap Final saw Drysdale continue the fast pace, taking over the lead on lap four, and showing the way to the checkered flag for the victory. Chartier finished second with Jacoby joining them on the podium in third. Gavin Whitt and Colorado winner Gage Korn completed the top-five. 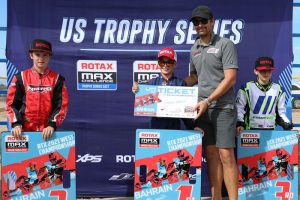 The final championship standings saw the top three separated by only 14 points. Korn (548) was able to retain the top spot in the championship chase, earning the RMCGF ticket. Only 10 points short was Chartier (538) with Jacoby (534) finishing in third. During the championship ceremony, Drysdale was presented with a ticket to the RMCGF for his victory on the weekend.

Colorado Micro Max winner Jaxon Porter was able to double up, defending the home turf at PKRA. Porter cleared the field by four tenths in qualifying, and then put in a perfect performance with fast time and wins in the heat races, followed by a wire-to-wire victory in the Final. The gap was 13 seconds after 16 laps for Porter at the checkered flag. Ethan Steele was second with Ryan Queen on the podium in third. Isaac Payn was fourth with Braylon Underwood in the fifth position.

The perfect score over the two rounds of racing put Porter at the top of the standings, earning him the RMCGF ticket. Underwood (526) finished out the program in second with Payn (467) in third. 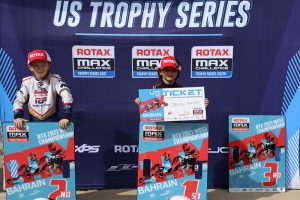 Each of the runner-up finishers in the Rotax USA Trophy Series West standings earn full entry into the 2022 season with third place receiving tires for the 2022 program events.

The champions from the Rotax USA Trophy Series West will join those from the Rotax Trophy Series East to help fill up the Team USA roster for the Rotax Max Challenge Grand Finals in Bahrain from December 11-18. Those drivers include Vivek Kanthan (Mini), Jake Walker (Junior), Justin White (Senior), John Bonanno (Masters).