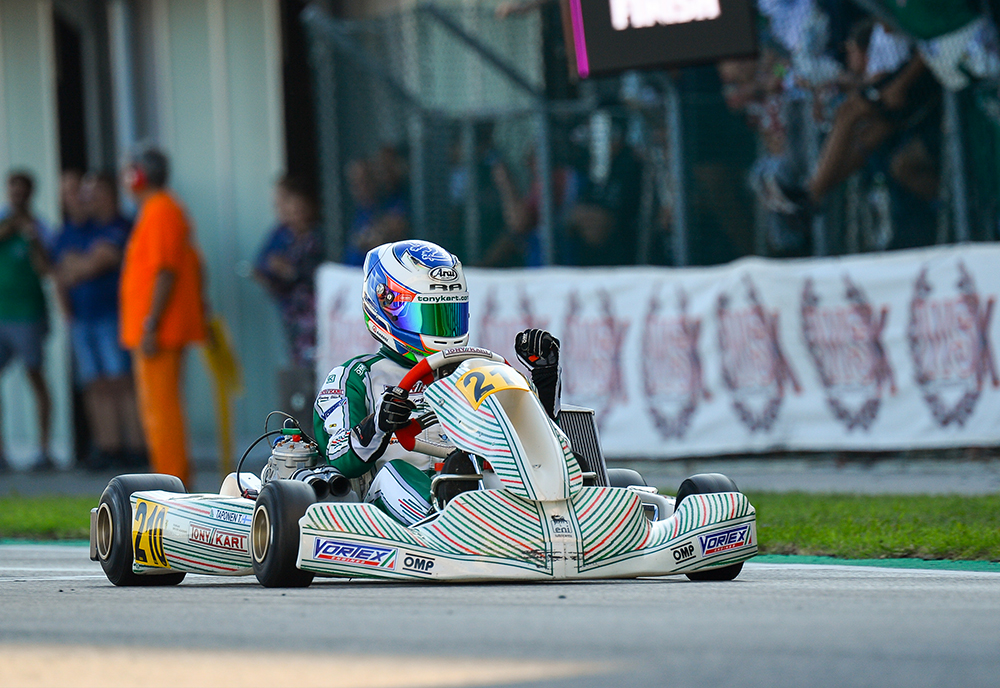 Our Tony Kart Racer 401R chassis graduates twice on the occasion of the last round in Adria. Tuukka Taponen is third in the OK final and wins the championship, while  James Egozi confirms his very good performance in the first round and becomes OKJ champion.

It is an almost perfect WSK Open Cup for our Tony Kart Racing Team, in this 2021 season. At the start of the OK and OKJ classes in the second (and last) appointment in Adria, our Tony Kart Racer 401R, as always equipped with the DJT and DST Vortex engines (OTK Kart Group’s “engine division”), conquer a double title at the end of the weekend, with Tuukka Taponen and James Egozi. These successes come after the recent world’s double victory in the KZ class, in Sweden, as well as the double win, in the single speed class, obtained on the occasion of the first round of the WSK Open Cup at the South Garda Karting.

In OK class, our drivers Joseph Turney and Tuukka Taponen come to Adria as the favourites for the title fight, after a win and a third place respectively won in the previous round in Lonato. Turney is third in the qualifyings and records, in the first two heats, two second places; in the third heat (in which he also obtains the fastest lap) he is still second, but receives a penalty from the race direction and finishes sixth in the overall ranking. In the pre-final, a problem stops Turney when he is in the top positions and for this reason he doesn’t enter the final. Taponen, on the other hand, scores two second places and a third in the qualifying heats as well as a second place in the pre-final. An accident on lap 4 of the final forces the race direction to suspend the race, just when Taponen was running in first position. With less than ten laps remaining on the restart, Taponen is more and more focused on winning the title than on the race result. In a fierce challenge, Taponen finishes third, becoming WSK Open Cup’s champion.

Great performance also by our Bruno Del Pino. The Spanish driver improves his position in the ranking at the end of the qualifying heats and achieves a Top 5 in the pre-final, followed by a sixth position in the final. On the other hand, the bad luck falls on Alexander Gubenko. In the final, while he is running in the top ten, the Russian driver is forced to end his race prematurely. A pity, especially given his growth over the weekend.

In OKJ, James Egozi and Harley Keeble are the authors of the double win in the first round of Lonato and arrive at Adria with great expectations. Egozi jumps soon signing the best time in his qualifying group and is third in the combined ranking; then he threads a series of four wins in the qualifying heats, in addition to a second place and three fast laps. The American continues with another win (and another fast lap) in the pre-final, a result that worths him a pole position in the final. Egozi knows well that he mustn’t risk and remains firmly in second position for the whole race: enough to triumph in the WSK Open Cup, in his year of debut in the “Junior” class. Keeble, on the other hand, is ranked slightly further back, but after the qualifying heats he conquers the Top 10. With a third place in the pre-final and a fourth one in the final, Harley also confirms his second position in the championship.

On the occasion of his first race with our official colours, Oscar Wurz signs a Top 15 in the qualifying and improves by another 5 positions at the end of the qualifying heats. A penalty in the pre-final for the wrong position of the front fairing (due to a collision with another driver) sends Wurz back towards the bottom of the final grid, but the Austrian driver rolls up his sleeves and climbs up 14 positions in the last race of the weekend, running on the timings of the first drivers classified. Two stops compromise the good possible results of Keanu Al Azhari and Jimmy Helias: the former is among the best five drivers in his pre-final and raises the white flag early in the final, while the latter shows excellent performances during the qualifying heats and in the pre-final. Finally, Enzo Tarnvanichkul does not find the same rhythm as in Lonato, but he has good chances for an improvement being at his second race with our team and also the OKJ category.

A long break separates our Tony Kart Racing Team from the most important event of the year. In about one month, the FIA Karting World Championship will be staged (October 28th – 31st) on the Spanish circuit of Campillos, reserved for the OK and OKJ classes.