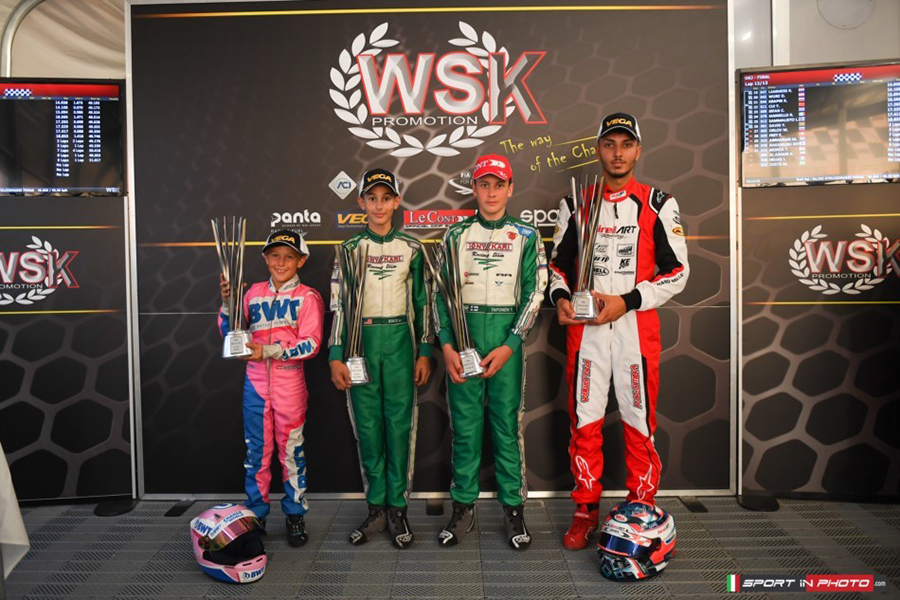 The fourth edition of the WSK Open Cup did not betray expectations and the final event at the Adria Karting Raceway has been once again a great international challenge after the opening round held in Lonato on September 19th. The championship organized by WSK Promotion had a great participation again with the presence of the main manufacturers and teams. In the two rounds the overall participation has been of nearly 500 drivers coming from 50 countries.

At the end of the long weekend in Adria, the final stages started with Prefinals on Sunday morning. These races have been tight and did not lack surprises, while the Final in the afternoon awarded the titles of each category. The KZ2 title went to the Italian Giuseppe Palomba (BirelART Racing/BirelART-TM Racing-Vega), that of OK to the Finn Tuukka Taponen (Tony Kart Racing Team/Tony Kart-Vortex-LeCont), OKJ’s to the American Luis James Egozi (Tony Kart Racing Team/Tony Kart-Vortex-Vega) and MINI’s to the Austrian Niklas Schaufler (Emme Racing/EKS-TM Racing-Vega). 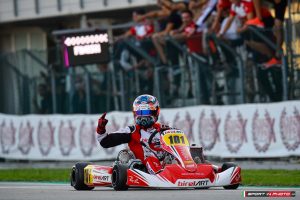 The KZ2 Final of Adria and the title to Giuseppe Palomba.
Giuseppe Palomba (BirelART Racing/BirelART-TM Racing-Vega) took an early lead in the Prefinal of KZ2 and crossed the finish line on top from the French Adrien Renaudin (CPB Sport/Sodikart-TM Racing). Jeremy Iglesias (CRG Racing Team/CRG-TM Racing-Vega) was third and led the driver on top after the heats, Paavo Tonteri. Giuseppe Palomba led the Final since the beginning and kept the position until the end. This victory allowed him to take the title too. The second position went to Jeremy Iglesias, and the third to Adrien Renaudin, who managed to fend off Danilo Albanese’s attacks (KR Motorsport/KR-Iame). Palomba ended the championship on top with 170 points, Renaudin is second at 150 and Iglesias third at 111. 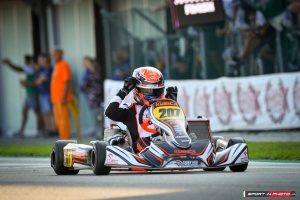 The Pole Kucharczyk wins the OK Final, but the Finn Taponen takes the title.
In OK, Prefinal-A was won by the leader of qualifying Tymoteusz Kucharczyk (BirelART Racing/RK-TM Racing-LeCont), while Prefinal-B went to the other favourite of the weekend, the Brit Arvid Lindblad (KR Motorsport/KR-Iame). The winner of the opening race in Lonato, the Brit Joe Turney (Tony Kart Racing Team/Tony Kart-Vortex) had to retire just after the start. An unlucky incident early into the Final forced the organizers to stop the race for a long time. Three drivers of team KR Motorsport were involved: Czech Republic’s Eliska Babickova, the Italian Nicola Lacorte and Malta’s Zachary David. Promptly helped, Babickova and Lacorte were taken to the Hospital of Padova for medical checks, while David injured his ankle. When the race could restart, the Pole Tymoteusz Kucharczyk won the Final, while the British driver Arvid Lindblad was involved in an incident in the closing stages when he was second. The second place went therefore to Cristian Bertuca (BirelART/BirelART-TM Racing), while the Finn Tuukka Taponen (Tony kart Racing Team/Tony Kart-Vortex) ended third and secured the title. Taponen totalled 188 points, Kucharczyk was second at 173 and Lindblad third at 132. 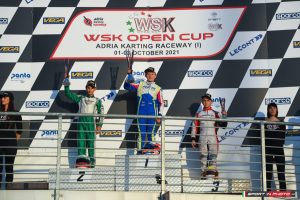 The Brit Slater wins the OKJ Final, the American Egozi the title.
In Prefinal-A the Brit Freddie Slater (Ricky Flynn Motorsport/Kosmic-Vortex-Vega) kept his successful momentum after winning the heats. The American Luis James Egozi (Tony Kart Racing Team/Tony Kart-Vortex) won Prefinal-B instead from the Jamaican Alex Powell (KR Motorsport/KR-Iame). The Final saw Freddie Slater taking the lead and ending on top followed by Luis James Egozi. The American managed to clinch the title thanks to the second place though. The third place in the Final went to the Russian Anatoly Khavalkin (Parolin Motorsport/Parolin-TM Racing). Luis James Egozi secured the title with 223 points, the Brit Harley Keeble (Tony Kart Racing Team/Tony Kart-Vortex) ended fourth in the Final and earned the second place of the classification at 170 points. Freddie Slater was third in the championship at 156 points. 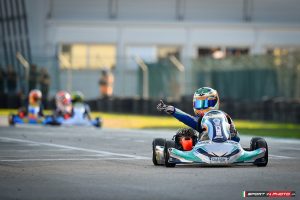 The WSK Final Cup will close the season on November 21st in Adria.

While there were no victories for North America, the USA took home the gold in the OK Junior division as mentioned above. James Egozi (Tony Kart Racing Team) placed second at the series finale, along with a Prefinal win helped to clinch the championship by 53 points. In total, North America had four drivers in the top-10. Jamaican Alex Powell (KR Motorsport) drove to sixth. California drivers Enzo Deligny (Parolin Motorsport) – who drives under the French flag – and Kai Sorensen (Forza Racing) were ninth and tenth. Three others were unable to make the main event. Sebastian Ng (Forza Racing) from Panama was two spots short of the main event with a P19 in Prefinal B. Matias Orjuela (Parolin Motorsport) was 24th in Prefinal A with Canadian Caleb Campbell P29 in Prefinal B to close out his WSK debut.

USA driver Ugo Ugochukwu (KR Motorsport) was among the top contenders all weekend in Adria. Ugo improved one position in the Final to end up fourth, helping to advance him to seventh in the final championship standings.