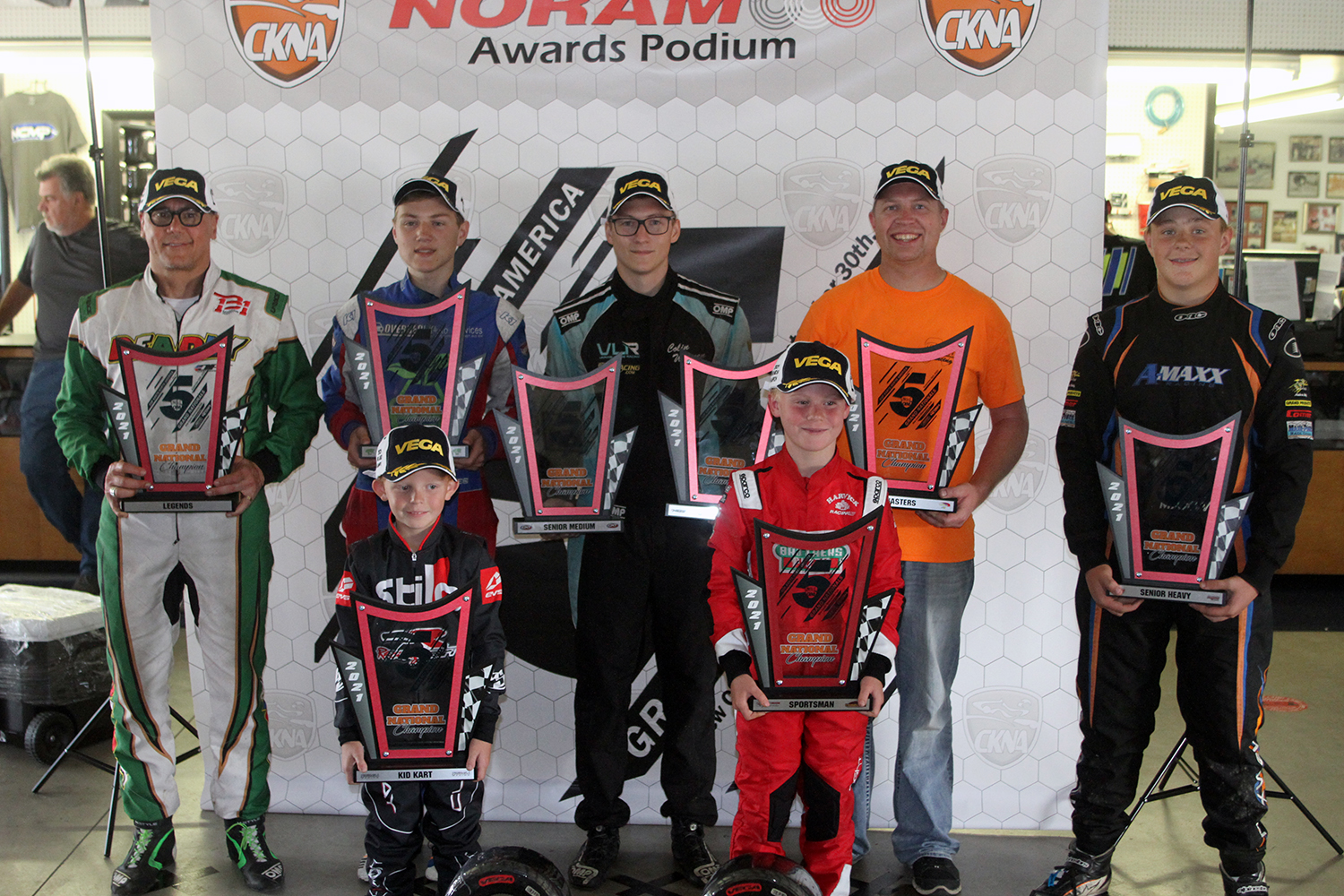 The Cup Karts North America Grand Nationals 5 was held at the New Castle Motorsports Park, beginning on September 30 and concluding on October 3. A record setting total of 404 entries in the eight Briggs & Stratton 206 categories, making it the largest for the event, and one of the biggest karting events in North America for 2021. Following two days of perfect weather conditions over Thursday and Friday, rain played a factor when wheel-to-wheel racing began Saturday. On and off conditions on Sunday made for last minute changes from dry Vega tires to wet, or the other way around when the track did begin to dry between rain showers. In the end, eight classes crowned the Grand Nationals champions with Florida driver Colin Warren earning two on the day. 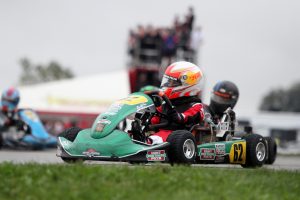 Keelan Harvick went wire-to-wire on the weekend for the victory in Sportsman (Photo: EKN)

The opening category on the schedule was the Sportsman division, which featured 55 drivers. Following the LCQ in the morning, the field was narrowed down to 40, which took to a still damp track on wet tires after overnight rain. Keelan Harvick (Nitro Kart) was able to lead the way throughout Friday and Saturday, setting fast time in qualifying and winning both his heat races to earn the pole position. Harvick was joined at the front by double heat race winner Caleb Tarter (Nitro Kart), Isaac Malcuit (Kart Republic) and Phaethon Saradpon (Kart Republic). Saradpon started fourth and eventually worked his way into second with Harvick leading lap after lap. On the final circuit, Saradpon made his move for the lead at the Scoreboard hairpin. The two swapped positions and continued into the final corner, drag racing to the line. At the checkered flag, Harvick scored the victory by 93 thousandths. Tarter drove to third with Malcuit ending up fourth as Cade Jaeger (Nitro Kart) completed the top-five. 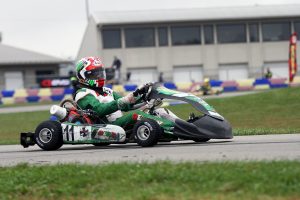 The track was still damp but no rain falling for the Legends division, making its debut at the CKNA Grand Nationals with 38 drivers. SpringNationals winner Tim Shutt (CompKart) was able to sweep qualifying and the two heat races to start from the pole position. Outside pole was Todd Baron (Deadly), who jumped out to the lead on the opening circuit. Near the halfway point, Shutt was posting fast laps of the race on the bumper of Baron. A lap kart on dry tires nearly came to a stop in front of Baron, who pushed the lap kart around and Shutt had to drive off track to avoid contact. Baron continued on with a good lead as Shutt had to try and cut down the gap. He would close but run out of laps at Baron went on to take the checkered flag to become the inaugural class winner at the CKNA Grand Nationals. Shutt settled for second with James Inscoe (Coyote) driving away to third. Joe Senna (Invader) was able to work past Jerry Miller (MGM) for the fourth spot on the final circuit. 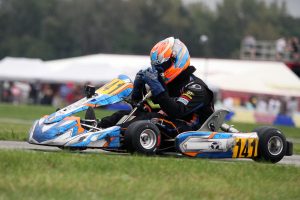 The gamble paid off for Adam Maxwell in Senior Heavy (Photo: EKN)

Senior Heavy was next on the order with a handful of 41 drivers electing to go with dry tires on a track that was slowly drying. Many of the front starters, including pole sitter Gary Lawson (Eagle) – who set fast time in qualifying and won both heat races. Lawson jumped out to a solid lead on the opening circuit, and put his kart in cruise control. Adam Maxwell (Evo) started 11th and was able to get up to eighth on the opening circuit with dry Vega tires. It only took one more lap before the advantage went to dry tires and Maxwell began picking off drivers. Up to second by lap five, he cut down the 3.7-second gap Lawson established in just two circuits. Lawson put up a fight but Maxwell had more grip and powered away from the defending champion. Maxwell led the final seven laps to secure his first CKNA Grand Nationals victories. Matt Lyda (Eagle) started 12th and was able to catch up and pass Lawson for second on the final circuit. Jacob Duvall (Eagle) started 13th, with the Florida driver getting up to fourth as CalSpeed Karting track manager Mike Smith (VLR) held on with rain tires to finish fifth. 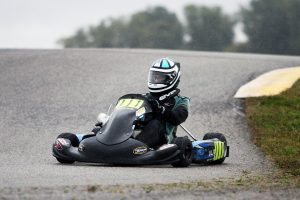 As the Heavy race unfolded, 52 Senior Light drivers rolled up to the grid with dry Vega tires. As they were pushed out to the front straight for the driver presentation, another rain shower began. Drivers and teams scrambled to decide on staying with dry tires, or making the quick switch to rain tires. After the wild scramble on the front straight, the field was set and pushed off with the majority taking on rain tires. Outside pole sitter and Heat 1 winner Corey Towles (Eagle) stuck with dry tires and was quickly dropped to the tail of the field. Heat 2 winner Logan Adams (Eagle) led the opening lap until top qualifier Brandon Jarsocrak (Coyote) took control. Jarsocrak established a solid lead with defending champion Colin Warren (VLR) up into the second position. In the closing laps, the rain return and began falling harder. Jarsocrak’s air filter was uncovered and began soaking in the water, slowing his engine pace. This allowed Warren to drive past prior to the white flag. Warren led just the final two circuits to claim a second straight victory in the category. Jarsocrak fell to fourth on the last lap with Micah Hendricks (VLR) and Dylan Amundsen (MGM) – who started 23rd – working past before the checkered flag. Jordan Bernloehr (MGM) completed the top-five. 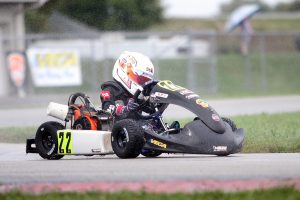 The track was at it’s wettest on the day for the Kid Kart following the shower that came through the NCMP at the end of the Senior Light class. The race was delayed as Camdon Clay (Top Kart) was stalled on the track. A fuel on/off switch was the reason and he was refired to join the field starting 11th. Tyson Underwood (Nitro Kart) had a perfect score going into the Final, and led the 18-driver field to the green flag. He led the opening three laps until a slight half-spin at the Scoreboard corner slowed his pace, dropping him to fifth and put Austin Taylor (WPK) into the lead. Taylor led until a charging Clay grabbed the lead on lap 11. From there, Clay drove away with fast laps of the race to a four-second margin of victory. Taylor settled for second as Kacen Hendrickson (Top Kart), Underwood and Cooper Mull (Nitro Kart) completed the top-five. 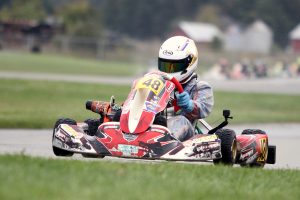 A strong performance by James Overbeck to win in Junior (Photo: EKN)

It was a near sweep for James Overbeck (Tony Kart) in the Junior division. Overbeck was third after qualifying Friday evening with Austin Jurs (Redspeed) setting fast time. Jurs slipped back in both of his heat races as Overbeck won both. With the 62-driver field split up for heat races, Bacon Zelenka (EOS) and Maier (Nitro Kart) were the other heat winners. They started second and third behind Overbeck with Jurs in fifth. Overbeck was able to establish a solid lead early on, and led all 15 laps to a nine-second victory. Spencer Conrad started fourth and was able to work past Jurs for the runner-up spot. Maier ended up fourth with Addison Ianniello (Kosmic) in fifth. 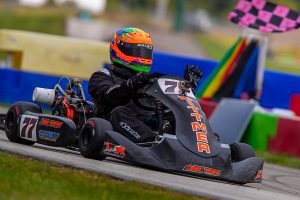 A record 47-drivers made up the Masters field this year, welcoming a fifth different winner, and decided off the track. North Division champion and Spring Nationals winner Michael Dittmer (Eagle) set fast time in qualifying, and won the opening heat race in a heavy rain. Starting from last after issues in qualifying was Eric Fagan (MGM). Coming from 47th, he finished 16th in the rain and drove to victory in the dry Heat 2 to line up fourth. Jamie Bradford (MGM) led the field to the green with Dittmer starting off pole. It was a wild scramble before the green as a large majority of drivers made the switch over to dry tires with the sun coming through and the track drying rapidly. The first opening laps were wild with drivers trying to find grip. In the process, Fagan jumped to the top spot and then began running away. Fagan led all 15 laps for the provisional victory. He would come across the line underweight, thus losing the win. That was handed over to Dittmer, who ran second the entire distance, claiming his first CKNA Grand Nationals victory. NCMP local Steve Knight (Eagle) drove to second with Jakab Nyiri in third. Matthew Gruenholz and Ryan Spierowski (CRG) finished fourth and fifth. 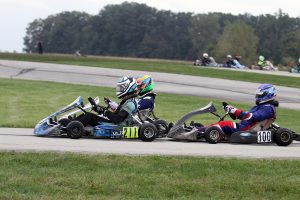 The eighth and final main event was for the Senior Medium division, featuring 63 drivers. Brandon Jarsocrak (Coyote) led the way in qualifying, posting a 1:17.149-lap to secure the top spot. The first heat race went to 2018 winner Gary Lawson (Eagle) before Colin Warren (VLR) took the win in the Even Heat #1. Jarsocrak won Odd Heat #2 with Warren earning a second heat race win, putting him on the pole position for the main event with Jarsocrak second. Jarsocrak jumped out to the lead and led for four laps before Adrian Cruz (Birel ART) and Warren pushed past. Lawson dropped Jarsocrak further back, taking over third as the top two were able to get away. When they began fighting for the lead with two laps remaining, that allowed both Lawson and Jarsocrak to join in. Lawson was able to go from third to first in two corners, coming to the white flag. Warren fought back on the final circuit at the Scoreboard corner, but drifted too wide with Lawson pulling off the over-under, but allowed Jarsocrak to pull alongside him heading into the final corner. With Jarsocrak on the outside, Warren pulled back up to Lawson bumper and was able to slip alongside him on the exit of the corner. They drag raced to the line, with Jarsocrak not sure which bumper to follow and Cruz right there as well. At the line, Warren grabbed the victory by a slim 14 thousandths of a second at the line over Lawson. Jarsocrak was third with Cruz fourth. Cole Nelson (Invader) advanced from eighth to fifth to complete the podium.

The 2021 season is now complete for the Cup Karts North America program, hosting the largest 4-cycle event in the world and the largest karting event of North America. The attention now turns to the 2022 season, with schedules already confirmed for the North and South Divisions, and the addition of the new CKNA Winter Nationals that will kick off the season – scheduled for December 31-January 2 at the 103rd Street Sports Complex in Jacksonville, Florida. Add in the Spring Nationals, set for March 4-6 at the Charlotte Motor Speedway, and everything comes to a close September 29-October 2 at New Castle Motorsports Park with the CKNA Grand Nationals 6 – where officials are expecting 500 entries in 2022.