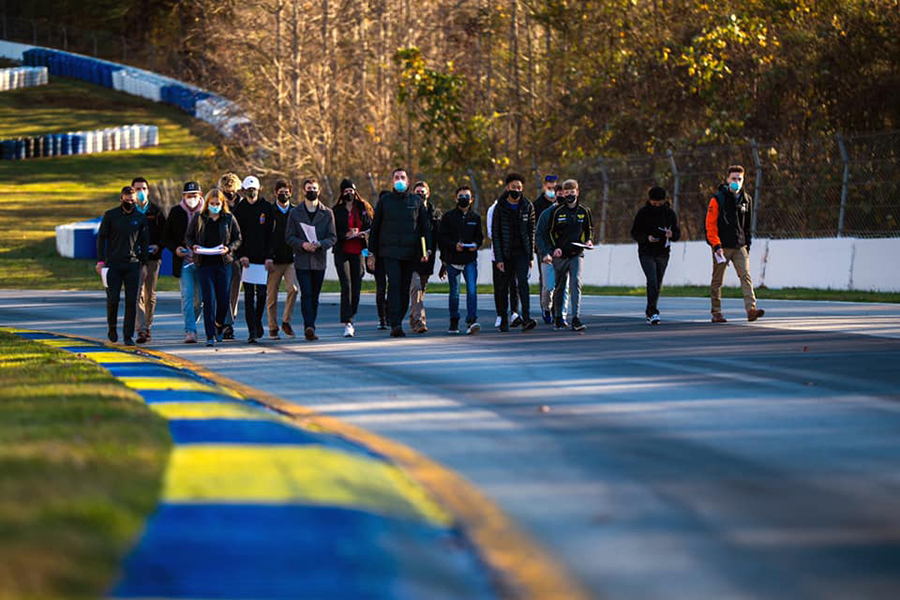 Twenty-two of the top go-karters in the country were nominated to join Mazda’ club racing factory team for 2022. After their video submissions that focused on their efforts both on and off the racetrack, nine were selected to move on to the Spec MX-5 Shootout to be held at Sebring International Raceway, October 20 & 21.

The two-day Spec MX-5 Shootout, which will run congruently with the MX-5 Cup Shootout, will test the drivers both on and off the track. Two-time 24 Hour At Daytona winner Max Papis (as seen above leading the track walk at the 2020 Shootout), current Mazda MX-5 Cup scholarship recipient Chris Nunes, and Mazda Motorsports’ business development manager David Cook will be the judges for the Spec MX-5 Shootout.  The finalists will be judged on a combination of on-track speed and consistency, data comprehension, professionalism, preparation, and more. At the conclusion of the Shootout, two racers will become Mazda’s 2022 club racing factory drivers, earning full rides in the 2022 Spec MX-5 Challenge Series presented by Toyo Tires as NASA Teen Mazda Challenge competitors.

The factory drivers will earn their NASA and SCCA competition licenses, receive testing days to further prepare for the race season, and then compete in the national series on four professional/bucket list tracks during the regular season, better preparing them for the pro racing circuit. The two drivers will then compete at the championship event later in the year.

Each of the regular season Spec MX-5 Challenge Series events will pay thousands of dollars in contingency awards, and culminate with an expected $70,000 prize pool at the championship event. The Spec MX-5 National Champion will earn a $30,000 race fund and an automatic nomination for the MX-5 Cup Shootout.

As part of the factory deal, the factory drivers will be provided a mentor to help them better understand the racing industry and what it takes to sustain a pro racing career. At the track, the drivers will work with a Mazda professional driver and coach, as well as an engineer and crew. The drivers will fly Mazda scholarship colors on the provided race cars; all parts consumables will be provided, including the spec tires selected for Spec MX-5 – Toyo Tires’ Proxes RR – for each race event and pre-season testing; the racers will have their entry fees covered; and receive a $2,500 travel budget and a $7,500 parts support budget for potential unexpected needs.