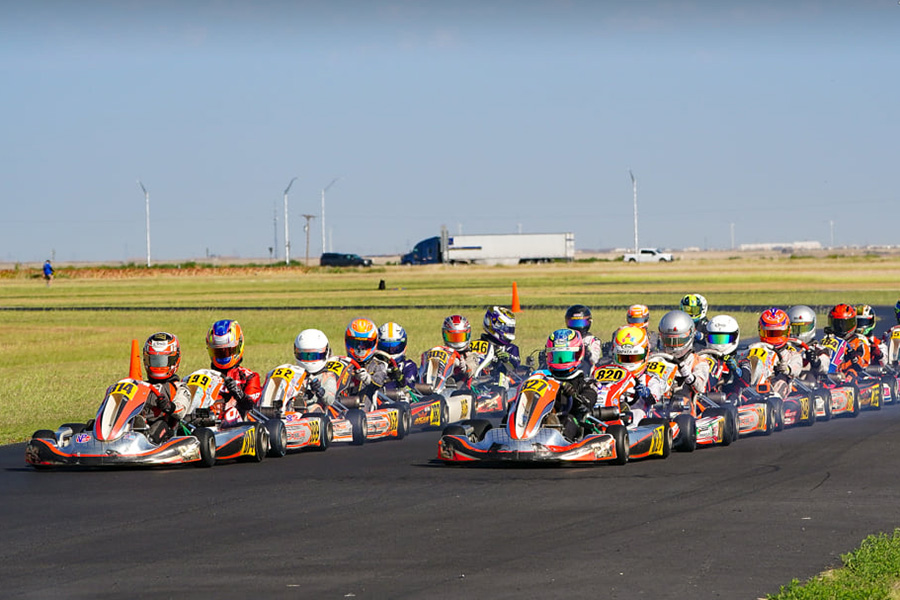 The 2021 season came to a close over the September 17-19 weekend for the Texas Sprint Racing Series Presented by Texas Barge. The fifth and final round of the championship program was concluded at the Amarillo Kart Circuit outside Amarillo, Texas – marking the first visit to the facility in series history – with the Fall Finale weekend. A total of 11 categories featuring IAME and Briggs & Stratton engines contested two days of racing around the near 9/10-mile circuit, putting in the final efforts toward the year-end championships.

The Exertech KA100 Senior category averaged nearly 40 entries per event over the five events of 2021. Jake French earned his second straight pole position with fast time of 1:04.429 in qualifying, clearing the 31-driver field by two tenths. A mechanical issue on the opening lap of Heat #1 put French on the sidelines. This allowed Adrian Cruz to take over the top spot, driving away to a four-second advantage for the win. French was able to retain the top position in Heat #2 for the first nine laps until Cruz took over the spot, and then Round One winner Josiah Tracy grabbed the top spot for the race win. Cruz and Peyton Phillips earned the most points over the two heats to fill the front row for the Final. Phillips was able to grab the lead on the opening circuit, and from there, lead all 18 laps for the victory. Cruz held second with Drew Chappell completing the podium. Ethan Arndt won the battle for fourth over Kaden Gray. 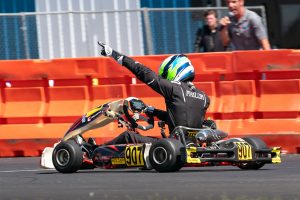 Cruz was able to pick up a victory in Amarillo, earning the triumph in the 206 Senior class presented by 4T Concrete Pumping. Cruz – a two-time winner on the season – started the weekend third in qualifying as defending champion and two-time 2021 winner Ethan Wolfe set fast time. Wolfe led the opening two laps of Heat #1 before Cruz took over en route to the win. Cruz finished Heat #2 in P1, leading all 11 laps. He kept the position for all 16 laps of the Final, driving away to a nine-second advantage. Shawn Kozma grabbed his best finish of 2021 with a runner-up ahead of Colorado driver James-Michael Sullivan, making his series debut with a third-place finish. Wolfe fell to fourth with Ava Elder rounding out the top-five.

The KA100 Junior presented by Fullerton Motorsports class welcomed its only two-time race winner on the season after four different drivers won over the first four rounds. Camryn Reed set the pace in qualifying with the top-seven separated by 87 thousandths. Among them was Round Three victor Helio Meza in third. Meza led all 12 laps of Heat #1, before fighting off Ivanna Richards for the win in Heat #2. The two swapped the lead before Round Three winner Aden Rudolph – who started fourth – took over the lead on lap seven. Rudolph showed the way for the remainder of the 18-lap feature to grab the victory. Richards won the fight for second ahead of Meza with Cole Kleck earning fast time of the race in fourth. Brayden Robertson completed the top-five. 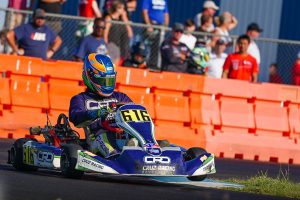 Caiden Wolfe put in another winning performance, scoring a fourth victory in the 206 Junior presented by Core Karting division. Wolfe began the weekend fifth in qualifying with Alex Pope earning his first top qualifier honor. Wolfe advanced to third as Koen Summers drove to the race win of Heat #1. Heat #2 was similar results after Wolfe led for much of the race with Summers earning the win. Summers opened up the 16-lap Final with the lead, showing the way for six laps until Camryn Reed grabbed control. She led through the white flag as Wolfe was able to work past and reach the checkered flag first for the victory. Reed settled for second. Austin Higginbotham and Round Two winner Philip Winegeart both pushed Summers down to the fifth spot by the checkered flag.

The 206 Cadet presented by Saville Electric class welcomed a new winner on the season. Tyrone Kemper Jr. started out the weekend with fast time in qualifying, his first of the season. Derek Wango was second in the session, and worked his way to the win in Heat #1. Carson Barry put himself in contention for the overall win, with a P1 in Heat #2, edging out Wargo by 97 thousandths. Wargo led from the pole position for the first 15 laps of the 16-lap Final. For much of the race, Emmett Eddolls climbed up from the starting sixth to run second behind Wargo. On the final circuit, Eddolls was able to steal the top spot and reach the checkered flag for his first series victory. Wargo settled for second with Brayden Westfall in third. Davis Henry was fourth with Aston Wyatt in the fifth spot. 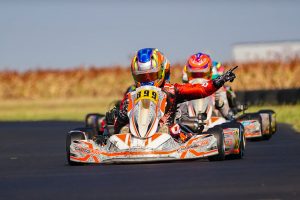 Another first time winner came in the Mini Swift class presented by Alan Rudolph Racing Academy. Diego Guiot was able to clear the 13-driver field in qualifying by two tenths of a second for fast time. Second was three time winner Oscar Iliffe. It was Iliffe that took the win in Heat #1 over Guiot, and scoring the win again in Heat #2 this time ahead of Round Three winner Ragan Saville. Four different drivers fought for the top spot over the 16-lap Final as Saville jumped out to the early lead. Guiot took over before a charging Landon Skinner joined the fight and led up to two laps to go. Saville took back control as Skinner fell down the order. Saville would cross the line as the provisional winner, only to receive a three-second penalty for an incident with Skinner. That promoted Guiot to the top step of the podium for his first series victory. Iliffe ended up second with Bobby Klein into third as Saville was classified fourth ahead of Santiago Duran.

Gage Bailey was able to record his second victory of the season in the Micro Swift category presented by PFX Storm Shelters. Bailey was two seconds quicker than anyone in the 13-driver field for qualifying. He was shuffled back at the start of both heat races, but managed to drive back up to win in both. The Final was a wire-to-wire performance, winning by 28 seconds in the 17-lap race. Matthew Dukette drove to second with Nicolas Orbezo taking third ahead of Tyrone Kemper Jr. and Juan Jose Paramo. 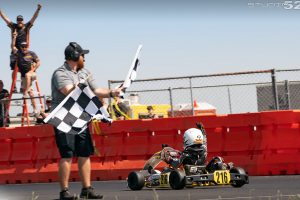 Pasha Ali put in a perfect score on the weekend in the Honda Kid Karts by A&M Excavating class. Ali put down a dominant lap time in qualifying to lead the session. After early challenges in both heat races, Ali was able to win each race. The Final was a green-to-checkered performance for the 13 laps, holding off a charging Colton Schniegenberg to record a fourth victory on the season. Round One winner Tanner Barsch was third with Liam Nachawati fourth and Andrew Anastasio in fifth.

Miguel Mier made it a perfect five-for-five on the 2021 season in the KA100 Master presented by Kart Racing Solutions category. Mier swept the action in Amarillo for his fifth straight weekend sweep. The main event was a 14-second advantage after 17 laps with Martin Stone in second and Shane Burkett joining them on the podium. DJ Ortiz and Anthony Harwin completed the top-five. Eight drivers competing in the X30 Senior by Crosslink Competition division with Cole Morgan earning the victory over Thane Morgan. Scott Cherry was third with Dustin Deleon fourth and Randy Russell in fifth. Ashlyn Speed was able to outrun Cole Kleck in the X30 Junior by International Mechanical Services class.

A full detail of the championship standings results regarding the 2021 Texas Sprint Racing Series will be released in the coming days. Be sure to follow TSRS on Facebook and Instagram, and get details on everything at www.texassprintseries.com.