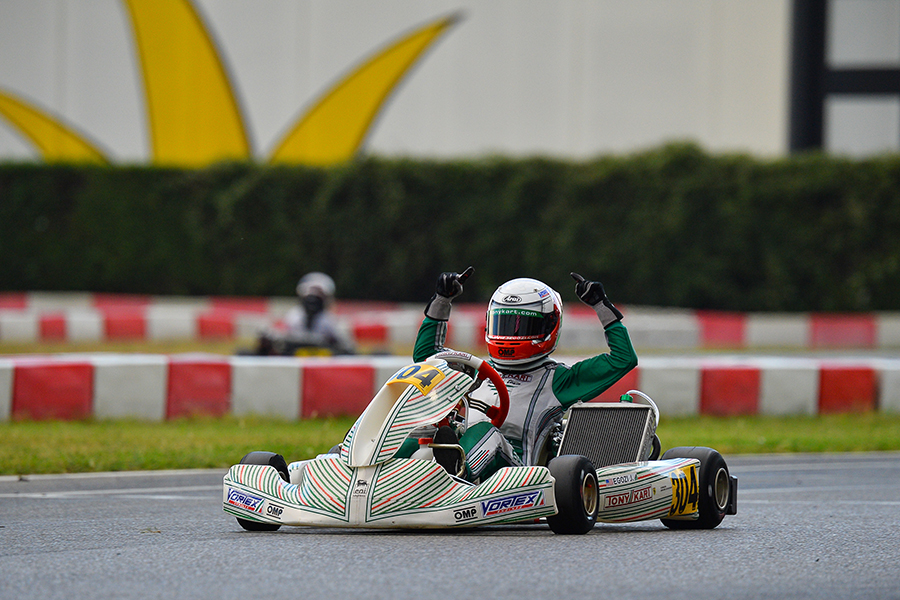 On the occasion of the first round of the series by WSK Promotion, our Tony Kart Racer 401R gains the victory and a third position in the OK class with Turney and Taponen, while it even signs a double win in OKJ class with Egozi and Keeble.

Tony Kart Racing Team’s successes go on. After the recent double world victory in the KZ class in Sweden, our official team makes a stop at the South Garda Karting for the first round of the WSK Open Cup 2021, where it obtains two victories, this time in the single-gear categories. Our Tony Kart Racer 401R, powered as usual by Vortex engines, in the OK class not only conquers the first position, but also the third one, while in the OKJ, confirming the WSK Euro Series’ title obtained a few months ago, even scores a double success.

In the OK final our Joseph Turney sprints at the start and, from the third position on the grid, he immediately takes the lead. The vice world champion defended himself brilliantly from his rivals’ attacks and runs triumphantly under the chequered flag. A result, that of the British driver, which comes after having collected two victories and two fast laps during the qualifying heats, in addition to the first position in the overall standings before the prefinals on Sunday morning. Also our Tuukka Taponen is one of the main protagonists of the weekend in Lonato: after three podiums in the qualifying heats and the victory in the pre-final B, the Finnish driver starts from the first row in the final and covers the back of his teammate Turney, until reaching the lowest step of the podium.
Positive debut for our Alexander Gubenko in the master class of the single-speed karts. The Russian driver did not let himself be intimidated in the Sunday’s final and climbs up 12 positions to reach the Top 10. On the other hand, the bad luck goes to Bruno Del Pino in the decisive race: a stop at the first lap compromise the chances of our Spanish driver to get a good result, eighth in the ranking at the end of the qualifying heats.

James Egozi‘s control in OKJ is almost perfect. The American driver, already very fast in the previous rounds, conquers his first victory in the “Junior” class. Egozi takes the first position at the second lap and, with great maturity, he does not leave any chance to his rivals to overtake him. Not by chance, Egozi also collects the pole position in the qualifying and four victories out of five in the qualifying heats, a sign of the excellent speed of the American driver running with our Tony Kart Racer 401R. The success of the Racing Team is completed by the second position of Harley Keeble: the recent champion of the WSK Euro Series follows his teammate at a few tenths of a second and is able to recover even 22 positions between qualifying and eliminatory heats.

After his excellent debut in Zuera, Keanu Al Azhari hits again the category’s final and finishes close to the Top 15 in the weekend of Lonato. Enzo Tarnvanichkul represents a nice novelty for our Racing Team and, at his first event in OKJ, he ranks among the best twenty drivers of the final. It’s a pity for our Jan Przyrowski, one of the possible protagonists considering the Top 5 at the end of the qualifying heats and the second position in the prefinal: the Polish driver immediately takes the lead of the race in the final, but then he is overtaken by his teammate Egozi and, surprisingly, he is forced to leave the race early. Also our Jimmy Helias has to stop when, during the A prefinal, he performs a comeback of 15 positions.

Josef Knopp defends the name of our Tony Kart Racing Team in KZ2. The driver from the Czech Republic takes advantage of the Lonato event to gain further experience in the competitive class reserved to the shifter karts.