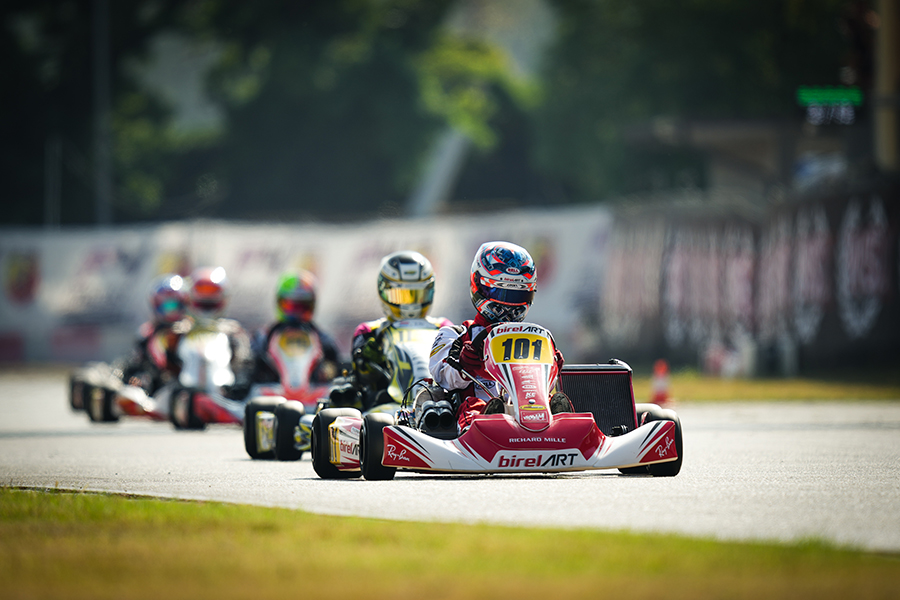 Giuseppe Palomba came very close to shining in the first round of the WSK Open Cup held in Lonato from 17th to 19th September. The competition, which opened the closing part of the season, confirmed the competitiveness of the Birel ART chassis with TM Racing engines in all categories and in all conditions, with rain interfering with the racing on Sunday morning. Despite several incidents, the official Birel ART Racing team took plenty of top 10 results.

“Giuseppe Palomba was our top driver in KZ2. After his pole position in Qualifying, he continued to dominate the heats. He was really on top. It was very unfortunate that a technical problem forced him to retire in the Prefinal. His 23-place climb to 10th place in the Final proved our potential in Lonato. In OK, Tymoteusz Kucharczyk and Cristian Bertuca performed well to reach 6th and 7th places in the heats. They continued with a good pace in the rainy Prefinal. Tymoteusz crossed the finish line of the Final in 8th position with the fastest lap before losing four places because of his spoiler, while Cristian moved up to 11th. The weekend was more complicated for William Macintyre in OK-Junior as he started with 41st in Qualifying. His best performance came in the wet Prefinal where he made up 13 places to 6th. He confirmed this by fighting in the top 10 of the Final.”

Giuseppe Palomba: Poleman, leader of the heats, retirement in the Prefinal, P10 in the Final +23 places, lap record of the event. P8 in the Championship.

Tymoteusz Kucharczyk : 9th in Qualifying, 6th in heats, P12 in Final (8th on the line), P9 in Championship.