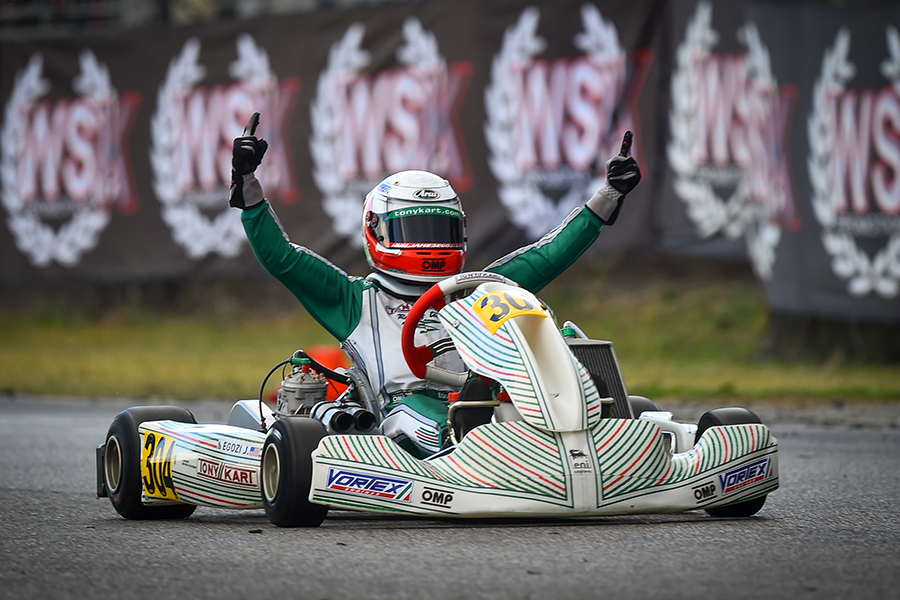 The victories at the South Garda Karting went to Joe Turney in OK, Emanuele Olivieri in MINI, Senna Van Walstijn in KZ2 and Luis James Egozi in OKJ.

A great event has taken place at the South Garda Karting Circuit on the occasion of the first of the two rounds valid for the WSK Open Cup. The event in Lonato had an excellent international participation with 250 drivers from 50 countries on track. After a dry first part of the weekend and 39 heats to define the finalists, rain arrived on Sunday morning making it more difficult during the Prefinals but the sun came out again for the finals.

The candidate to the win in the Prefinals. 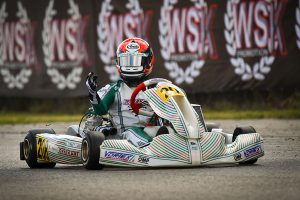 Prefinal-A of OK was run on dry tarmac and the victory went to the Bulgarian driver Nikola Tsolov (DPK Racing/KR-Iame-LeCont). Drizzle did not spare Prefinal-B and the Brit Arvid Lindblad (KR Motorsport/KR-Iame) crossed the finish line as the first on a tricky tarmac at the end of a 16 place comeback. Unfortunately for him, a 5s time penalty pushed him down the field and the victory went to the Finn Tuukka Taponen (Tony Kart Racing Team/Tony Kart-Vortex). In MINI, the victory of Prefinal-A went to the Austrian Niklas Schaufler (Emme Racing/EKS-TM RacingVega), Prefinal-B went to the Spanish driver Christian Costoya (Parolin Motorsport/Parolin-TM Racing) instead.

In the single Prefinal of KZ2 the victory went to the Dutch Stan Pex (KR Motorsport/KR-TM RacingVega). The Italian Giuseppe Palomba (BirelART Racing/BirelART-TM Racing) retired from the race after posting the pole position time and being on top in the heats. United Arab Emirates’ driver Rashid Al Dhaheri (KR-Iame-Vega) claimed the win in Prefinal-A of OKJ, the Brit Harley Keeble (Tony Kart Racing Team/Tony Kart-Vortex) won Prefinal-B instead. 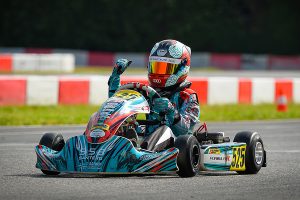 A nice sun has welcomed the start to the finals. The Brit Joe Turney (Tony Kart Racing Team/Tony Kart-Vortex-LeCont) took an early lead in OK and kept it all the way to the chequered flag. The Brit Arvid Lindblad (KR Motorsport/KR-Iame) managed to get some ground back in the closing laps and reached P2, while Tuukka Taponen (Tony Kart Racing Team/Tony Kart-Vortex) rounded off the podium in P3. The Russian Artem Severiukhin (Ward Racing/Tony Kart-Vortex) was fourth and the Italian Luigi Coluccio (Kosmic/Kosmic-Vortex) fifth.

The victory in MINI goes to Emanuele Olivieri.

MINI had a very exciting Finale and the duel for the victory was decided in the closing corners when the Italian Emanuele Olivieri (Formula K Serafini/IPK-TM Racing-Vega) clinched the win from the Czech Jindrich Pesl (BabyRace/Parolin-Iame) to the Austrian Niklas Schaufler (Emme Racing/EKS-TM Racing). The Spanish driver Christian Costoya (Parolin Motorsport/Parolin-TM Racing) had to settle for P5 as he was proceeded also by the Swede Kin Lindblom Scott (Gamoto/EKS-TM Racing). 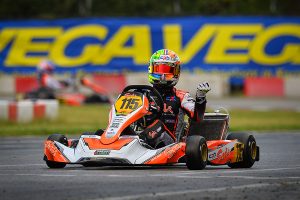 The KZ2 final was led from lights to flag by the Dutch Senna Van Walstijn (CPB Sport/Sodikart-TM Racing-Vega). He fended off very well the attacks moved by his fellow-countryman Stan Pex (KR Motorsport/KR-TM Racing). Behind the two Dutch drivers, the third place went to the French Adrien Renaudin, who is Van Walstijn’s teammate, while the fourth and fifth place went to the Italian Danilo Albanese (KR Motorsport/KR-Iame) and the German David Trefilov (SRP/Maranello-TM Racing).

After a hard-fought start, the American Luis James Egozi (Tony Kart Racing Team/Tony Kart-VortexVega) took the lead of the final and kept it all the way to the flag. Behind him, the sprint for the podium was won by Egozi’s teammate Harley Keeble, who led United Arab Emirates’ Rashid Al Dhaheri (KR-Iame-Vega). The fourth place went to the Brit Coskun Irfan (KR Motorsport/KR-Iame) and the fifth to the French Enzo Deligny (Parolin Motorsport/Parolin-TM Racing).

Complete results are available at http://www.wskarting.it/open_cup.asp

The second round of WSK Open Cup will take place at the Adria Karting Raceway (Rovigo) on October 3rd. 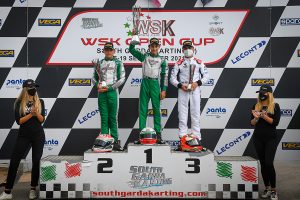 A total of 101 driver filled up the field of the Mini category. Five USA drivers and two Canadians represented North America, yet none were able to make the main event. Canadian Jensen Burnett (Energy Corse) had the best finish, placing 20th in Prefinal A. USA driver Jack Iliffe (Parolin Motorsport) was two positions back. Asher Ochstein (Babyrace Driver Academy) was the top finisher in Prefinal B, ending up 24th with Canadian Crisan Ilie (CRG Racing Team) in 34th. Unable to qualify for a Prefinal race was Vivek Kanthan (AVracing), Alessandro Truchot (Parolin Motorsport) and Bronson Koustas (Babyrace Driver Academy).

Ugo Ugochukwu (KR Motorsport) was the lone USA driver in the OK category. Ugo improved from seventh in qualifying to end up fifth in points after the heat races. He finished second in Prefinal A but was dropped to fifth after a pushback bumper penalty. After starting inside of Row Five, Ugo was able to advance up to fifth by lap two. After that he was shuffled down to the tail of the field in the following two laps. He would eventually retire on the final circuit after recovering back to 21st.