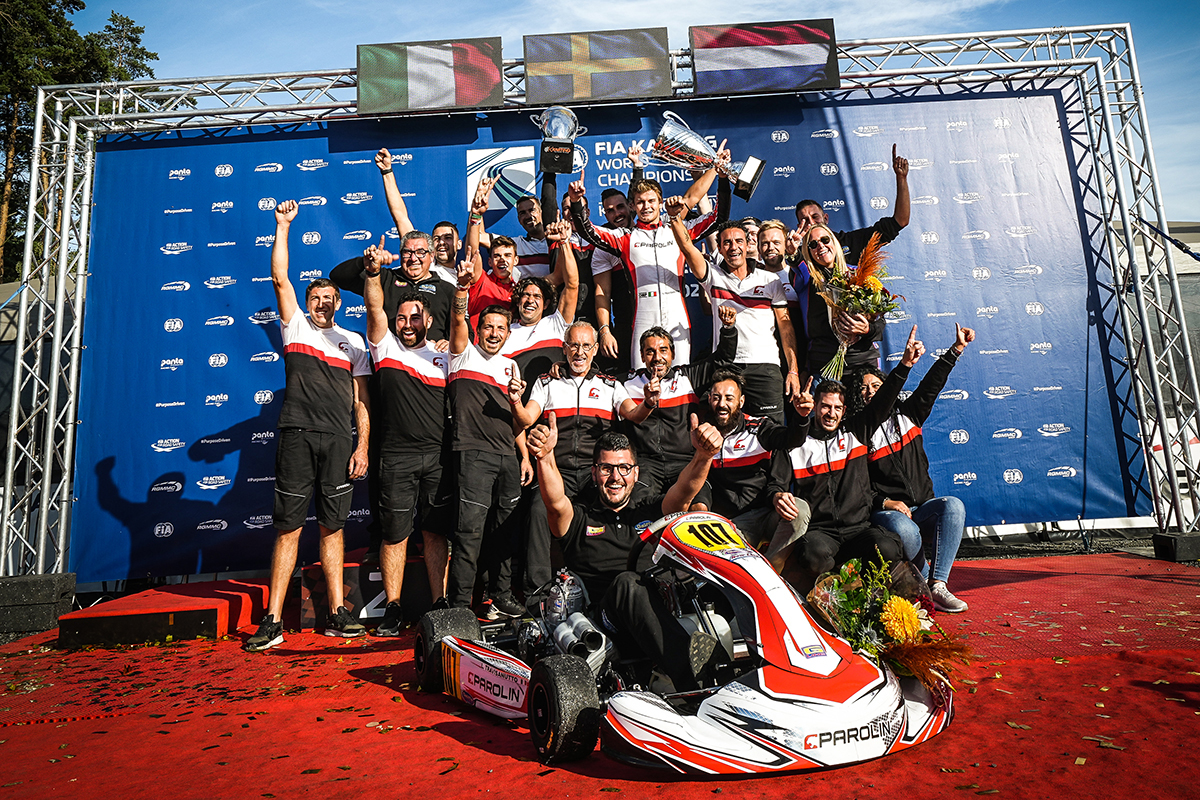 After three seasons dedicated purely to the direct drive categories from Mini to OK, Parolin Motorsport has made a successful return to the gearbox karting field in 2021 with its TM Racing engines. At the Kristianstad world meeting Lorenzo Travisanutto dominated the FIA Karting International Super Cup – KZ2 and added a fourth major success to his record. Parolin’s success was complemented by James Wharton’s top five finish and Viktor Öberg’s 7th place.

“Lorenzo’s victory in our colours gives us great pleasure,” commented Marco Parolin. “The two-time OK World Champion approached his first season in KZ2 with a lot of humility. He has gradually discovered the subtleties of driving a gearbox kart. We are proud to have been able to provide him with the very competitive equipment to win in Sweden. The whole team proved to be very competitive as we placed three drivers in the top seven and I thank Gallifa Kart for the quality of the TM Racing engines. James achieved his best international result in his last race in karting, by reaching 5th place after superb progression while Viktor Öberg, who joined us for the occasion, was well placed despite limited racing this season. Angelo Lombardo had also performed well among the 91 participants before having to retire in the Final. The performance of our drivers in the World KZ Championship was less convincing, but the competitiveness of the equipment was there as Francesco Celenta’s 3rd fastest time in the Final attests. Parolin Racing Kart has proven the quality of its entire chassis range at the highest level this season from Mini to KZ, to assert its place among the best current manufacturers.”

Parolin Motorsport has allowed Lorenzo Travisanutto to rediscover the fighting spirit that took him to the top of karting competition in 2018 and 2019 in OK. The Italian Champion gained confidence as the KZ2 races progressed. Already a strong performer at the last European meeting in Adria, he returned to victory in Kristianstad after an ideal run. He started by taking pole position in Qualifying against 90 drivers from all over the world, and then went on to win three heats with the fastest time each time. Leader of the heat classification, he drove a perfect Final. First of all he had to get a good start and resist the impetuousness of his rivals in the first laps. Once this was achieved, Lorenzo was able to break away from the rest of the field and calmly manage the closing laps to secure a historic victory in this de facto world cup.

James Wharton was one of the protagonists of the competition, regaining 13 positions during the heats thanks to four top fives and two fastest laps in the race. Confident in his equipment, the young Australian regained another four places during the Final and concluded with a superb top five at world level with a total progression of 17 places since Qualifying – a nice way to end his karting career. The Swedish Viktor Öberg has found his competitiveness with Parolin Motorsport. Three times in the top five of the heats with a fastest lap, he qualified in 8th place for the Final. After a slow start, Viktor made up eight places to finish in a very good 7th position. Angelo Lombardo was at ease again by coming back to 4th and 3rd in his heats, but he had to retire quite early in the Final.

In KZ, the World Championship was less successful for the Parolin Motorsport drivers. Qualifying was not brilliant and several setbacks in the heats did not help the situation. However, Francesco Celenta managed a good Final with a significant seven-place recovery and the third fastest time to finish 14th, while Mario Schettino did not finish the race.