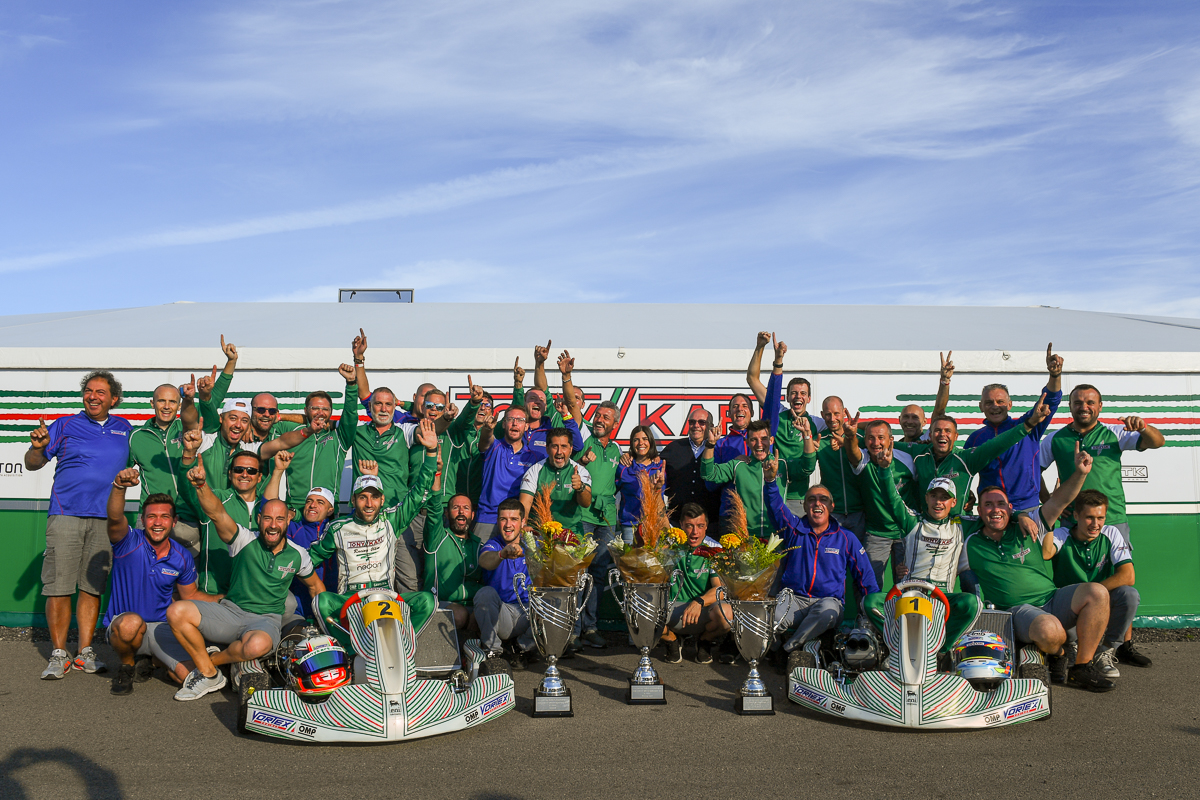 Historic double win at the FIA Karting World Championship in Sweden for our Racing Team. On his home circuit of Kristianstad, Noah Milell conquers the 2021 title in the master class of the shifter karts, “accompanied” by his teammate Lorenzo Camplese, second on the finish line.

Extraordinary triumph for our Tony Kart Racing Team at the one shot of the FIA Karting World Championship 2021, reserved to the KZ class. Kristianstad, in Sweden, is now all in green colour thanks to the incredible performance of the Tony Kart Racer 401R that excels in the Sunday final, powered by the RTZ/RSZ engines of Vortex, the OTK Kart Group’s “engine division”.

Noah Milell masterly shows his performance in the KZ final. The Swedish driver, on his home circuit, perfectly jumps from the second position, on the outside line of the starting grid, and immediately takes the lead of the race. Milell flies, he is uncatchable: he improves his time at every lap until his best of 50.241, then he slows down his pace after having gained a reassuring advantage. Milell is the first crossing the finish line with a gap of more than 5 seconds, thus gaining the world champion title of the master class of the shifter karts. A result that cannot be repeated, in a category that usually sees minimal gaps between the various competitors. Behind Noah comes Lorenzo Camplese, for a whole Tony Kart one-two. Lorenzo shows to be also very fast during the whole weekend, with three podiums gained in the qualifying heats that puts him on the third position of the starting grid of the final. After the start, Camplese puts in a perfect race without the slightest stain that gives him the title of vice world champion. Excellent performance also for our Simo Puhakka, able to sign two fast laps in the qualifying heats and to achieve the 5th final place, confirming the general and overall excellent performance of the whole team.

As usual, the KZ2 class, which competes for the FIA Karting International Super Cup title, was hard fought and full of participants (91 drivers). After the excellent weekend in Adria, on the occasion of the last round of the European Championship, Samuel Luyet is third on the starting grid of the final. Already in the first laps, he proves to be one of the aspirants for the title: on the third lap, in fact, he takes the second position and keeps it for half of the race, until an unlucky technical problem forces the Swiss driver to park his kart at the edge of the track; it’s a pity because during the weekend, as proof of his speed, he also collects two victories in the qualifying heats and two podiums. Inheriting all the responsibility at that moment is his brother, Jean Luyet, able to climb up from tenth place and to fight until the last meter for the Top 3. Under the chequered flag he finishes fourth, a remarkable performance considering his stop in Adria due to a strong pain in his ribs. Great recovery of 13 positions for Markus Kajak, able to reach the Top 20: a collision in the fourth heat prevents the success of the Estonian’s path, who is clearly growing during the weekend, as shown by the fast lap he signs in the last heat of the Sunday morning. Positive trend also for Kacper Nadolski and Josef Knopp compared to the two European events of Wackersdorf and Adria. The Polish driver climbs up not less than 14 positions at the end of the qualifying heats, coming close to the Top 10 during the fifth and last heat, while the Czech driver gains 8 positions compared to the qualifying heats, with a constant run between Saturday and Sunday. Unfortunately, these performances are not enough for our two drivers to get a valid pass for the final.

After the World Championship, the Tony Kart Racing Team comes back to Italy for the WSK Open Cup. As a matter of fact, from 16th to 19th September, our drivers of the MINI, OKJ, OK and KZ2 classes will take part in the round at the South Garda Karting of Lonato.