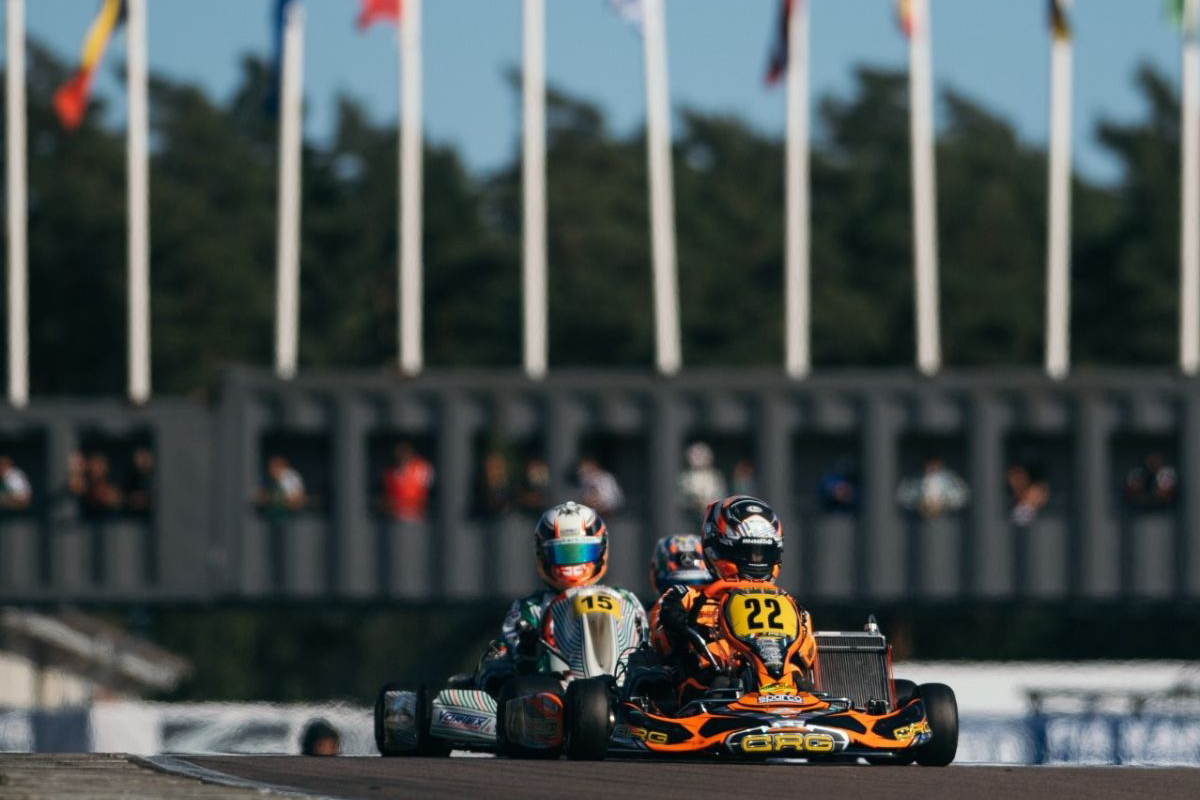 The FIA World Championship KZ & KZ2 weekend, which took place in Kristianstad (Sweden) from the 2nd to the 5th of September, was lacking in satisfactions for the CRG drivers. After Giacomo Pollini’s victory in the KZ2 European Championship and Paolo Ippolito’s success in the Adria race in KZ, expectations were high, but the most important event of the year was not lucky for the CRG colors.

In KZ, the top class, Paolo Ippolito proved to be very competitive and his “race pace” could have ensured him to fight for the podium, but in the 3rd heat a contact relegated him from P6 to P10 on the starting grid of the Final , downsizing its chances. In the end he got a 7th place, which is tight, compared to the potential he showed at the weekend. The balance was in any case more negative for Alex Irlando and Jeremy Iglesias: the Italian was forced to retire in the Final, while Iglesias accused some set-up problems that relegated him to the center of the group, without being able to fight for the best positions.

In the KZ2 class it was a mix of bad luck and mistakes that did not allow the two most competitive CRG drivers in Kristianstad, Giacomo Pollini and Paavo Tonteri to get on the podium. The first one lost one heat due to a race contact  and moved back on the starting grid of the Final from P5 to P19, where he was then forced to retire due to an accident. Tonteri, on the other hand, after starting from P5 on the grid, in the opening stages of the race was relegated to the last position by a contact that definitively closed any possibility for him to fight with the leaders. The balance was partially saved by Jorge Pescador, who finished in the top ten in P10, while Brandon Nilsson finished 14th. Unfortunately Giannoni and Cebrian were forced to retire. The titles went to Milell in KZ and to Travisanutto in KZ2, where the Maranello brand, with which CRG has an active technical partnership, obtained a positive 3rd place with Trefilov.

Paolo Ippolito (KZ): “The performances on the track were very close between all the drivers and it really took very little to finish from the top 3 to outside the top ten. In qualifying we were very fast, just 150 thousandths from pole, and also in the heats we were competitive. But we went on working on the set up, both for the chassis and for the engine, constantly looking for the limit to make a bit of a difference, without succeeding unfortunately. From a performance point of view, I am happy, but obviously the result does not satisfy us and does not reflect our potential”.

Giacomo Pollini (KZ2): “In a single trial event like this one, the contacts on the track are paid at a very high price; for what concerns myself they first conditioned my position on the starting grid and then they definitively put me out of the race in the Final. It is a shame because we have once again shown that we have the speed to make a great result, but races are like that and we need to look forward. In any case, I want to thank my NGM team, CRG for the chassis they provided us and Galiffa for the engines: it has been a very positive season and we have little to complain from a technical point of view”.

Paavo Tonteri (KZ2): “The team has worked very well and our performances have been constantly improving this weekend. The chassis was easy to drive and gave me a great feeling right from free practice. I was sure I could fight for a place on the podium, but everything vanished after a few meters of the race, due to an accident with another driver who, from my point of view, created the situation for that contact between us. Now it is useless to complain, but the disappointment for the missed opportunity is very high”.