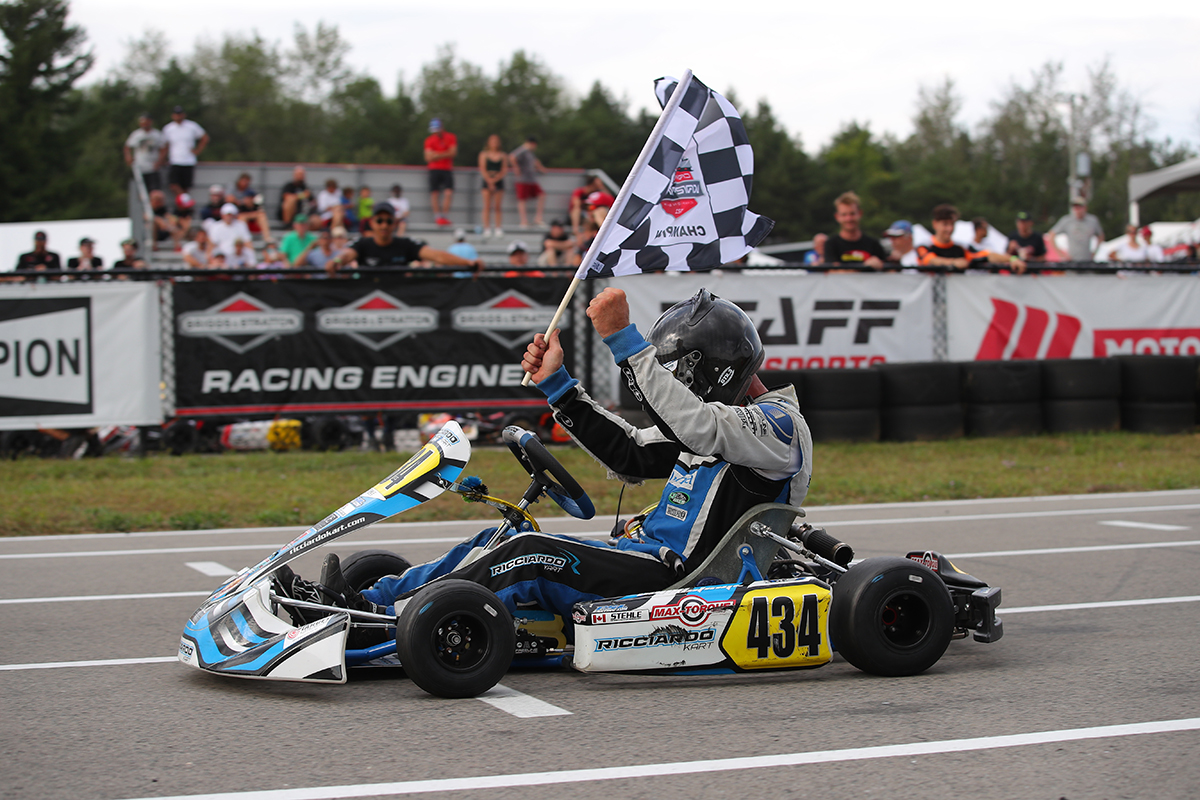 It was another winning weekend for Birel ART North America at the 2021 Motomaster Canadian Karting Championships as the multi-dealer team earned six pole positions, seven main event victories and twenty-three podium results as the prestigious event. Taking place at the Mosport Karting Center, the Birel ART North America contingent was comprised of dealers from across the country that united for one common goal, to win.

“We can’t thank our dealers and race teams enough for their help, support and competitive spirit at the most recent Canadian Karting Championships,” explained Birel ART North America’s Dominic Labrecque. “A big shout out to Ben Cooper Racing, Prime Power Team, PSL Karting, Pro Racing Ontario (PRO), Newspeed Motorsports as well as all of the independent drivers that trust in the Birel ART product line. Thank you for your support.”

Rocco Simone claimed his first career Canadian Karting Championship in the Briggs Cadet class as he piloted his Newspeed Motorsports prepped kart to the front of the field. Ben Cooper Racing’s Alexis Baillargeon put a pair of Birel ART North American drivers in the top five with a solid fourth place effort. In the Briggs Junior class, Prime Power Team competitor Jordan West managed to claim a third-place podium result after scoring the pole position earlier in the week while Birel ART drivers claimed four of the top five positions in Briggs Senior qualifying and three of the top five in the weekend’s main event. With Jonathan Treadwell, Jordan Prior, Avery Miller, and David Barnes starting their weekend in first, second, third and fifth respectively, it was Logan Ploder who climbed to the top step of the podium to be named Canadian National Champion. Jordan Prior made it a one-two finish for the brand as Treadwell ended his weekend with a fifth-place result.

Competing under the PSL Karting flag, Mark Stehle turned his second-place qualifying effort into a championship performance to earn the Briggs Masters Canadian National Championship. Ian Macintyre began his weekend with a solid pole position run but was unable to complete the task in the talented field of competitors. In the Briggs Junior Lite class, it was a podium sweep for PRO with Anthony Martella taking the win just ahead of Elias McKenzie in second and Logan McMurray in third.

Four Birel ART branded drivers qualified in the top-five in Mini Max and all four managed to stay in the front group throughout the event weekend. Alexis Bailargeon qualified in the second position but fell to fifth in the main event while Lucas Deslongchamps improved from his inside row three starting position to the second step on the podium. Major Makovskis was able to secure the third position ahead of Pearce Wade in fourth as the Mini Max drivers put on a show.

Looking to carry the momentum from his pole position into the main event, Frankie Esposito dropped down the Rotax Junior running order but managed to salvage a fourth-place finish. In Rotax Senior it was Dale Curran who score the program’s best result with a third-place podium result after qualifying fifth while Patrick Woods-Toth crossed the line in P5. Four more top-five results came from the DD2 category as Yuchen Ye and Lucas Pernod but Ben Cooper Racing on the podium in second and third while Jordan Prior put three team drivers in the top-five finishing just behind Louka St-Jean from PSL Karting in fourth.

Former DD2 World Champion turned DD2 Masters competitor Pier-Luc Ouellette has not lost his touch as he got older, claiming the pole position before going on to win another Canadian National Championship. Birel ART North America and Ben Cooper Racing drivers made it another one-two finish as Alexandre Gauthier crossed the line in second, improving from P3 in qualifying while Pascal Acquaah was fourth.

Prime Power Team was one of the teams to beat in Mini ROK and they proved that at the end of the weekend, putting three drivers in the top-five and two on the podium. Pearce Wade garnered the team’s best result to be name the Canadian National Championships Vice Champion just ahead of Savio Paniccia in third and Matthew Roach in fifth.

After qualifying on the pole position, PRO’s Logan Pacza was unable to maintain his pace and position in the top-five, but a pair of Prime Power Team drivers found their way to the podium. Frankie Esposito continued his front of the field presence and climbed to the second step of the blocks celebrating with his teammate Marcello Paniccia in third. In ROK Senior it was another double podium performance by Prime Power Team with Patrick Woods-Toth converting his fourth-place qualifying effort into a second-place finish and Marco Filice climbing the running order to finish third. Gianluca Savaglio put three in the top-five with a solid drive to fifth before the checkered flag flew.

Davide Greco was the driver to beat in Open Shifter turning his pole position performance into a Canadian National title for Birel ART North America and PSL Karting. The Birel ART contingent had another podium sweep with PRO drivers James Altamirano and Jared Ramnarayan coming home second and third, just ahead of Ouellette who had another impressive performance finishing fifth. A strong qualifying performance from F4 United States Championship competitor Nico Christodoulou was negated in the day’s main event.

Another podium sweep for the Red Army came in the Open Shifter Master category as Pier-Luc Ouellette was again made his presence felt turning his pole position into a National Championship. Nicolas Bedard and Francesco Vassallo put PSL Karting in the second and third positions to make it a 1 – 2 – 3 finish.

Labrecque continued, “A solid weekend for a solid team. We can’t wait for the next one!”