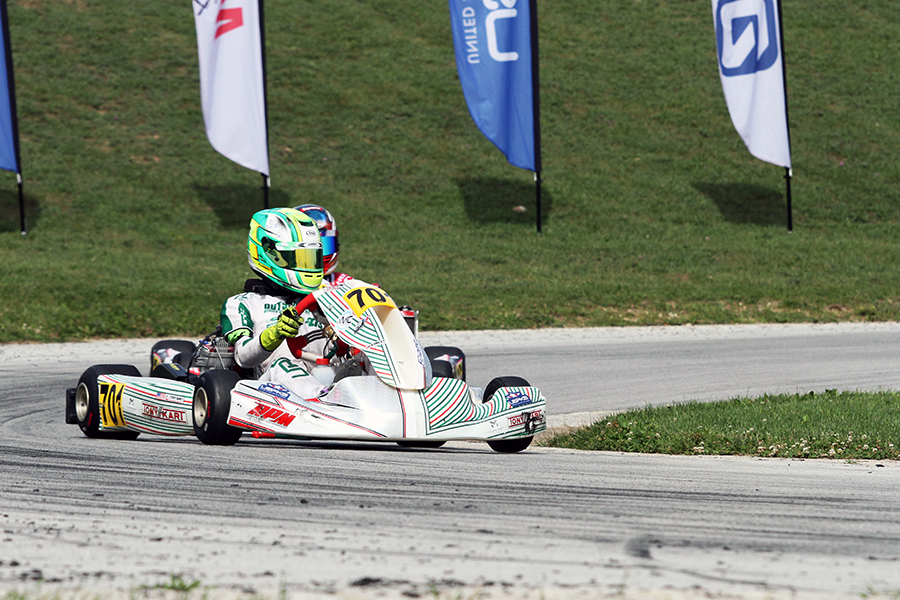 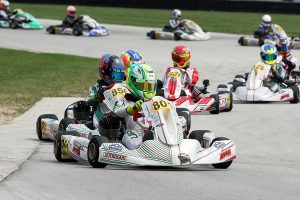 It has been some time, if ever, that we have seen a run like this in the sport of karting here in the United States. Ryan Perry Motorsport driver Carson Morgan has put together a winning streak in the Junior ranks through the month of July and now into August.

Morgan’s run began at the United States Pro Kart Series Badger State Grand Prix during the July 9-11 at the CTECH Manufacturing Motorplex at Road America. His starts at the Elkhart Lake, Wisconsin facility were the first of 2021 in the series, racing both in the KA100 Junior and X30 Junior divisions.

The weekend began with the KA100 Junior class first in the order, with Morgan completing the sweep on Saturday. Setting fast time in qualifying, Morgan was challenged in the Prefinal but came away with the win. In the 22-lap Final, Carson went green-to-checkered for a 3.7-second victory to open up the weekend.

On the same day, it was a wire-to-wire performance in the X30 Junior class. Morgan was P1 in qualifying and led every lap of the Prefinal and did the same in the Final. Canadian Ayden Ingratta put the challenge to Morgan but came up short at the end. That gave Morgan two wins on opening day of action.

KA100 Junior on Sunday was a carbon copy for Morgan with a sweep of the day. Fast time in qualifying was followed by early challenges in the Prefinal. Morgan would come away with the win and then lead all 22 laps in the Final for victory, leading by 5.9 seconds at the checkered flag with fast lap of the race.

Morgan ended the weekend with a perfect 12 for 12 in the official sessions on the weekend with another sweep in the X30 Junior class. After setting fast time in qualifying, Morgan led each lap of the Prefinal for the win. In the Final, Carson was under pressure from Justin Adakonis. After Adakonis ran him down in the closing lap, Morgan was able to fight him off to lead each of the 22 laps, including the last for a fourth victory on the weekend.

Three weeks later, Morgan and 165 other entries took part in the inaugural IAME USA Grand National championship at the GoPro Motorplex in Mooresville, North Carolina. Once again, Carson was pulling double duty in KA100 Junior and X30 Junior. The KA field was stacked with 35 drivers competing. Morgan set fast time in qualifying but was penalized two positions. He bounced back to go on and win the first two heat races and finished second in the last. Morgan started the Prefinal on the pole position, but was pushed back to fourth on the final circuit. He still retained the pole position for the main event, and quickly jumped out front on the opening lap. From there, he held off challenge by Prefinal winner Helio Meza to score the victory.

The X30 Junior class was a struggle early on for Morgan after starting the weekend sixth in qualifying, about three tenths off the fast time. Consistency paid off for Morgan as he placed third, fifth and second in the heat races to line up on the pole position for the Prefinal. He led the majority of the 18-lap race, but was third on the final circuit. He was able to edge out Cameron Weinberg and Ayden Ingratta for the win, as all three crossed the line within nine hundredths of each other. Holding onto the pole position with the win, Morgan went out and led the first 11 laps of the Final. He was pushed down to second and then third before he jumped back into the lead on lap 14. From there, he drove away to a 2.7 second advantage for the victory, taking home an IAME International Final ticket and a $5,000 payday.

As reported on during the SKUSA Pro Tour SummerNationals coverage two weeks ago, Morgan was able to win all four main events at the New Castle Motorsports Park. The victories extended his win streak to 10 over the course of three straight events. He was also able to defend both the KA100 Junior and X30 Junior SKUSA Pro Tour championships, becoming the first driver ever to defend two championships in back-to-back seasons.

Senior racing is on the horizon as Morgan announced he will be moving up a level at the SKUSA SuperNationals 24 in December following his 14th birthday. 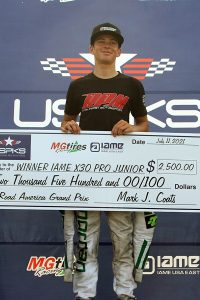 Chassis: Tony Kart
Engine/Engine Builder: KA100/Comet Racing Engines – X30/Precision Works
Sponsors: My Dad
Series You Compete In: Superkarts! USA Pro Tour, United States Pro Kart Series
Years Karting: 7
How did you get started in karting? I went to Adams Kart Track
What has been the high point in your racing career? This last run with USPKS, IAME Grand National Championship and the SKUSA SummerNationals
What are your goals in racing? To one day race sports cars
In a few words, how would you describe your driving style? Aggressive and patient
Funniest moment at the race track? When we locked our friend in the porta pottie