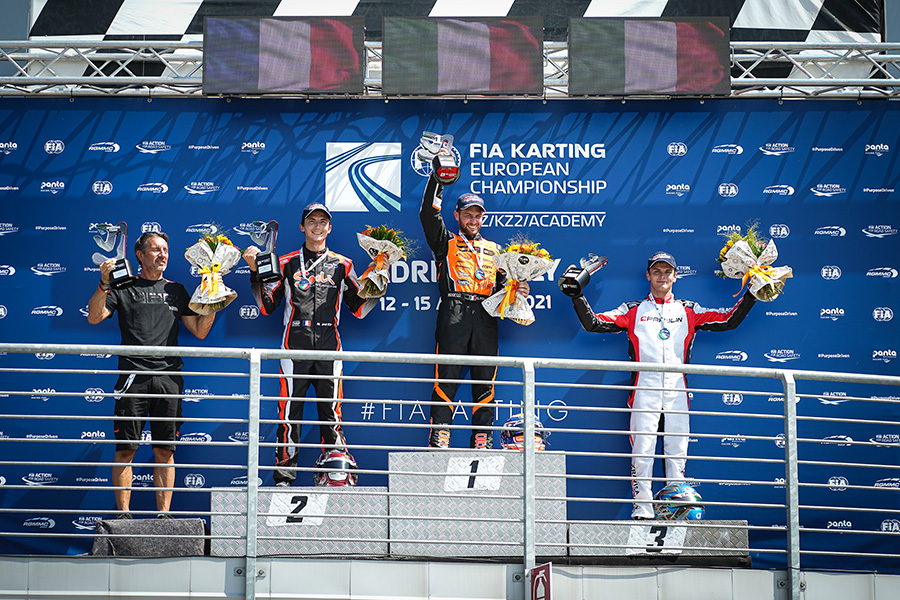 The FIA Karting event in Adria (ITA) concluded in style with a breathtaking final day in the tradition of the first two. From the last Qualifying Heats in the morning to the Finals in the afternoon, this Sunday 15th August delivered races of rare intensity punctuated by resounding dramatic twists. The Italians were in the limelight in the gearbox categories. The Final of the FIA Karting European Championship – KZ was won by Paolo Ippolito, while the title went to Riccardo Longhi. In the FIA Karting European Championship – KZ2, Giacomo Pollini won both the Final and the Championship with flying colours. Poland’s Maciej Gladysz won the Final of the FIA Karting Academy Trophy and took the lead in the provisional standings.

The heat did not let up at Adria Karting Raceway with temperatures peaking at around 37°. The fighting spirit of the participants did not waver either and it is no exaggeration to say that the suspense was high until the end of the event. Most of the favourites were in trouble for various reasons and the winners created a surprise in all three categories. 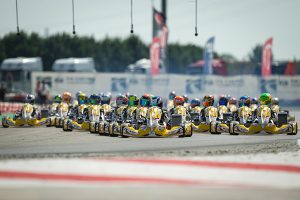 All equipped with identical karts (Exprit/Vortex/MG), the drivers of the FIA Karting Academy Trophy engaged in epic battles in which the slightest mistake was very costly. Maciej Gladysz (POL) came out on top in the lively Qualifying Heats ahead of Oleksander Bondarev (UKR), Nikolas Roos (ZAF) and Yevan David (LKA). The Final was much longer and the positions were stabilised from the sixth lap. Gladysz took the lead over David while Riccardo Ianniello (ITA) soon moved up to second position and Bondarev remained fourth ahead of David Walther (DNK). These drivers kept their distance without making any mistakes and crossed the finish line in this order. The provisional ranking of the Trophy underwent important changes. Only Reno Francot (NLD), 13th in the Final, was still in 2nd place, the other four drivers in the top five were newcomers. In three weeks time in Kristianstad (SWE), the third and final event promises to be particularly interesting.

Provisional ranking of the 2021 FIA Karting Academy Trophy after the second round in Adria.

The domination of Giuseppe Palomba (ITA – Birel ART/TM Racing/MG) and Danilo Albanese (ITA – KR/IAME/MG) during the Qualifying Heats gave them a privileged status at the start of the FIA Karting European Championship – KZ2 Final. However, their duel was cut short by a collision on the second lap. Albanese retired and Palomba was demoted. NGM Motorsport driver Giacomo Pollini (ITA – CRG/TM Racing/MG) took advantage of the situation to take first place. He increased his lead to almost three seconds at the finish line, and with this victory he also won the Championship. Senna Van Walstijn (NLD – Sodi/TM Racing/MG) was not as competitive as he had hoped. He had to be content with a top five finish and second place in the Championship. Paavo Tonteri (FIN – CRG/TM Racing/MG), who was second for a long time, lost out to Hubert Petit (FRA – Sodi/TM Racing/MG) on the last lap and finished in sixth place. Lorenzo Travisanutto (ITA – Parolin/TM Racing/MG) finished a strong third with 10 places gained, ahead of Arthur Carbonnel (FRA – Sodi/TM Racing/MG). 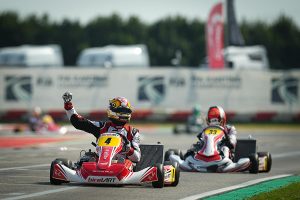 Matteo Vigano (ITA – Birel ART/TM Racing/MG) was the favourite after finishing the Qualifying Heats of the FIA Karting European Championship – KZ2 with a third victory. His hopes were quickly dashed in the Final, where he gradually lost places. Paolo Ippolito (ITA – CRG/TM Racing/MG) immediately took the lead in front of Pedro Hiltbrand (ESP – Birel ART/TM Racing/MG). Stan Pex (NLD – KR/TM Racing/MG) was very fast and reached third position with an option on second place before retiring with five laps to go. Viktor Gustafsson (SWE – Birel ART/TM Racing/MG) took his place on the podium. Adrien Renaudin (FRA – Sodi/TM Racing/MG) took fourth place ahead of Jérémy Iglesias (FRA – CRG/TM Racing/MG). Meanwhile, the battle for the title was going on a little further back in the field. Émilien Denner (FRA – Intrepid/TM Racing/MG) stayed in his starting position of 7th for a long time, while the official Birel ART Racing driver Riccardo Longhi (ITA – Birel ART/TM Racing/MG) courageously continued his comeback from the heats. Having started 13th, he probably didn’t think he would be able to take the title. However, he quickly came back to 8th position just behind his rival Denner. He ended up in 6th position at the finish line, which allowed him to win the European title he had been hoping for for a long time. Andrea Kimi Antonelli (ITA – KR/IAME/MG), who was the poleman in Qualifying, was not yet at ease in the standing starts against his experienced rivals, but he showed a strong competitiveness in the race.

The results of the Adria competition can be found on the official FIA Karting Championship app for mobile devices and on the website www.fiakarting.com. 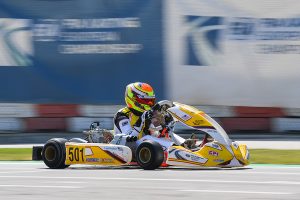 United States driver Caleb Gafrarar made his second start in the Academy Trophy program at a facility he’s had many laps on prior to the weekend. Gafrarar was among those in the top-10 throughout the three practice sessions. An issue on the grid left Caleb without a drafting partner in the qualifying session, putting him 15th in his group to put him 29th overall in the order. Gafrarar was put into the Group A heat races to start from the inside of Row 8. A rough opening heat race result was recorded after driving up to 12th with a pushback bumper penalty and 10-second punishment for ‘causing a collision’ dropped him down to 21st. The second heat race was another progression forward, driving up to seventh but another pushback bumper penalty dropped him to 14th. Gafrarar saved his best heat race for last, improving up to fourth in the eight-lap run. The results from the three heat races placed him 23rd in the standings, starting from the inside of Row 12 for the main event. A great opening lap put Caleb in the 14th position and continued improving up to ninth by the halfway point of the 18-lap Final. By the checkered flag, Gafrarar was in 14th. His results over the first two events have him tied for 10th in the championship standings.