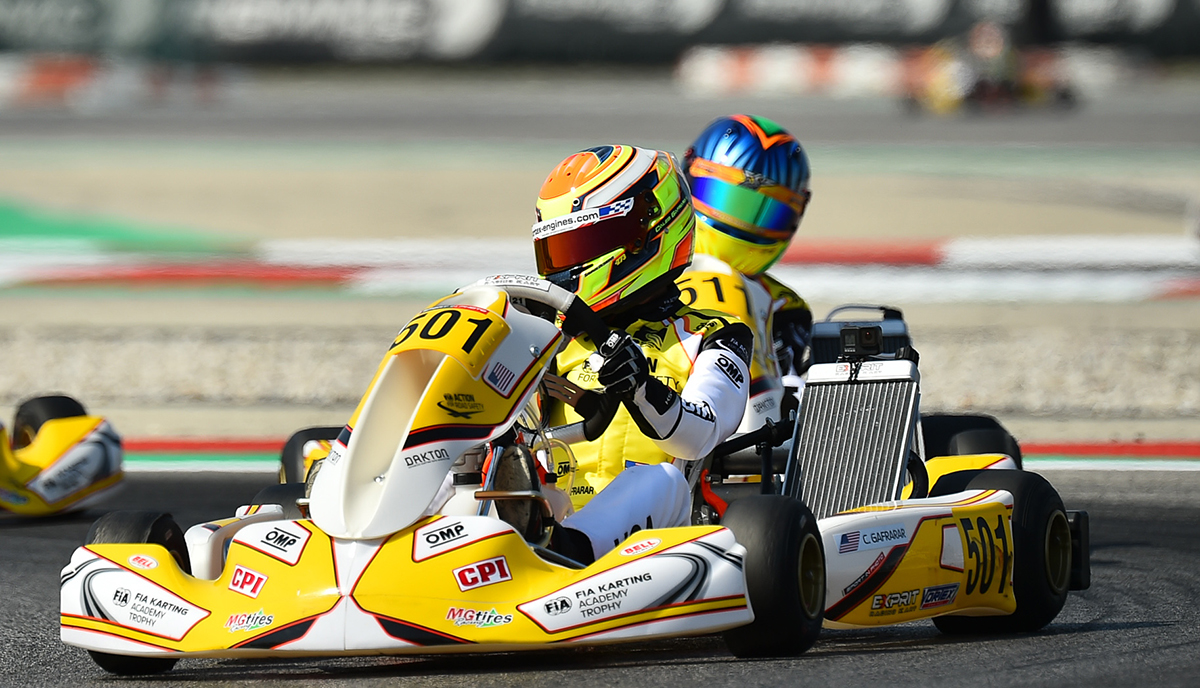 Caleb Gafrarar secured a solid 14th place result after an issue in qualifying and a heat race penalty
(Photo: Sportinphoto)

Back to the Adria International Raceway in Adria, Italy for the third time this season, North Carolina resident Caleb Gafrarar took on the next round of the FIA Karting Academy Trophy. With a stout first event in Germany that saw him well inside the top-ten, the young Team USA driver had to overcome a heat two penalty to work his way back into the main event and then drive forward.

“It was a good weekend, and the speed was definitely there for us,” explained Gafrarar. “I managed to be inside the top-ten in all three practice sessions and was looking forward to qualifying, however, an issue on the grid had me separated from the field and running on my own. While a draft is important at Adria, I did not have time to work my way back towards the group and was forced to put in a time solo.”

Starting from deep in the field in all three of his heat races, Caleb G put on an impressive drive in heats two and three, and took matters into his own hands in heat one when the wheel-to-wheel action took a turn.

Gafrarar continued, “Heat one was not what we were looking for. A fellow competitor proceeded to brake test me for multiple corners in a row and my bumper was pushed back after minor contact. Knowing that I would receive a time penalty at the end of the race, I took matters into my own hands and made sure that the penalty was deserved. In heats two and three, I was able to salvage 14th and fourth place results and lined up 25th for Sunday’s main event.”

Mired back in row thirteen and racing in equally prepared equipment, Gafrarar knew that he was going to have to have a good start and be aggressive to move up the order. Advancing from the opening circuit to the final checkered flag, Caleb G was able to secure a 14th place finish despite having a lap time that was barely good enough for the top-20.

“Back to the USA now and the focus shifts to Sweden in a few weeks,” added Gafrarar. “Thank you to everyone for the support, and we will work even harder to be on the podium at the next one.”