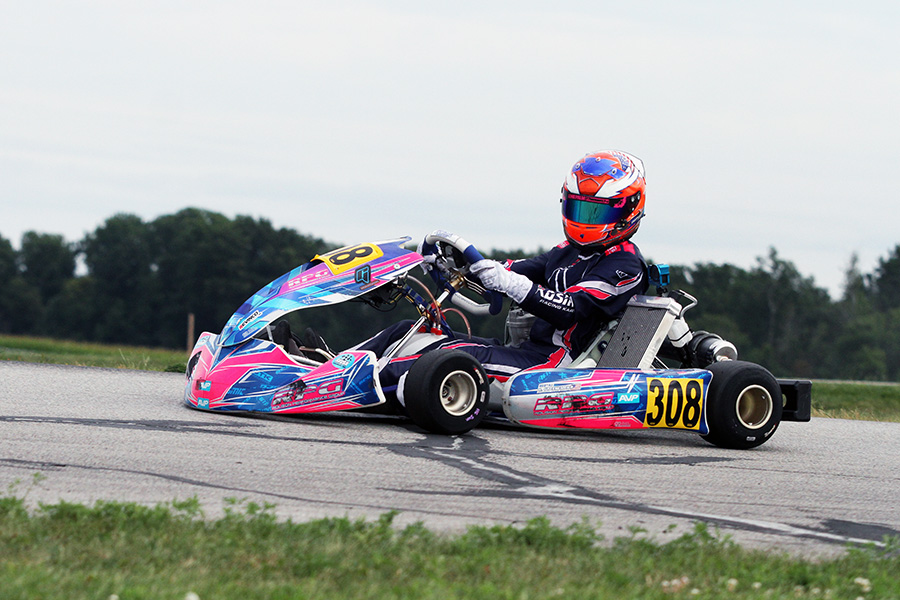 Hannah Greenemeier added her name to the list of SKUSA Pro Tour champions with the title in X30 Senior (Photo: EKN)

Sunday was the sixth and final round to the 2021 Superkarts! USA Pro Tour with the 11th running of the SummerNationals hosting the series finale. What began in March in New Orleans, was completed at the New Castle Motorsports Park with the sixth and final round of this year’s championship program. The New Castle, Indiana facility provided an amazing day for racing, with all nine categories deciding just who would end up with the coveted SKUSA #1 plate in their respective classes. History was made throughout the day, including the second ever female series champion, the first three-time shifterkart headline title winner, and the first driver to record six career championships at the SKUSA Pro Tour. 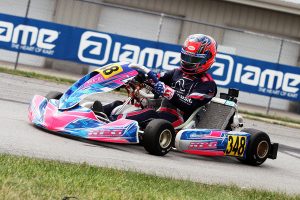 The title chase in the Rolison Performance Group X30 Senior division was done to just two drivers. Branyon Tiner (RPG / Kosmic) held a slight advantage over Hannah Greenemeier (RPG / Kosmic) heading into the final round. Greenemeier nearly grabbed the 10 bonus points for fast time in qualifying but was edged out by Saturday winner Nate Cicero (RPG / Kosmic). He along with Greenemeier and Ryan Norberg (RPG / Kosmic) decided the Prefinal with four-time champ Norberg earning the win. Tiner was making his way forward inside the top-10 when contact put him off the track and eventually out of the race. That set up for a scenario for the championship to be in the hands of Greenemeier depending on the results of the main event. Norberg was able to get away from the field at the start of the Final as Cicero was shuffled off in the opening corners and then collected in a multiple kart pileup in turn three, ending his day. Norberg set his ride on cruise control, running consistent times over the 16-lap race to drive away to a 4.680-second advantage. Greenemeier was in the fight for a podium position behind Norberg. She along with Pauly Massimino (RPM / Kosmic), Braden Eves (MPG / WPK) and Thomas Annunziata (MDR / Tony Kart) were in the fight. Annunziata was able to edge out Massimino and Hannah at the line for the runner-up spot. Massimino was given a pushback bumper penalty, thus dropping him to fifth and Thomas Nepveu to fourth in his Trinity Karting Group / Kart Republic debut weekend. And it also promoted Greenemeier to the third step of the podium, clinching the SKUSA Pro Tour championship, becoming only the second female champion in the 12-year history of the program. 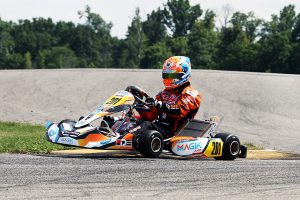 Redemption and completing the process was on the mind of AJ Myers (Magik Kart USA) in the PSL Karting Pro Shifter division. Myers was left wondering what if after recording a DNF on the opening lap of Saturday’s main event. A 1:11.695 lap time in qualifying helped him begin with his first top qualifier since NOLA. He then went on to lead every lap of the Prefinal to start from the pole position in the Final. Myers grabbed the holeshot, but was challenge by the SKUSA Winter Series champ Brent Crews (LEM / Formula K) that took over the lead after turn three. Myers struck back quickly, slipping past at the double rights after the ‘ski jump’ to take back the top spot. From there, Myers led all 16 laps for his fifth victory on the year, earning back-to-back titles and his record third championship in the headline shifterkart category on the SKUSA Pro Tour. Andrew Bujdoso made it a Magik Kart USA 1-2 by placing runner-up. Crews held off challenges from four-time SuperNationals winner Billy Musgrave (Factory Kart) for the third step on the podium, making it two trips to the steps in his Pro Tour debut. Cole Shade (GFC / Trackmagic) put on a show, climbing from 27th to fifth after recording a DNF in the Prefinal on the opening lap. 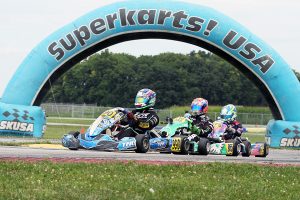 Each and every session in the KA100 Senior by Nash Motorsportz was decided by less than two hundredths of a second . Thomas Annunziata (MDR / Tony Kart) edged out Arias Deukmedjian (TKG / Kart Republic) by seven thousandths in qualifying before holding off Saturday winner Austin Garrison (RPG / Kosmic) by 15 thousandths in the Prefinal. Garrison, Annunziata and Park made up the lead group with Thomas showing the way for the majority of the race with Jace waiting patiently. They began to shuffle for position in the scoreboard corner on the final circuit with Park and Garrison trying to find a way past. Garrison set up an over-under move at I-70, working past Park and had to dig down the straight to the checkered flag to pull alongside Annunizata before the checkered flag. At the line, the timing called Garrison the winner by five thousandths. Video review however showed Annunziata ahead at the line, and was declared the victor for his first SKUSA Pro Tour win. Park settled for third, ending a run to the SKUSA #2 plate after six rounds. Nolan Allison (RPG / Kosmic) drove to fourth, earning the SKUSA #3 plate while Peyton Phillips (Core / Redspeed) recorded his best career result in fifth. Cole Morgan (RPM / Tony Kart) locked up the series championship prior to the main event. 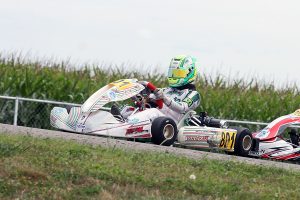 Three championship went home to the Morgan family, two in the double repeat performance by Carson Morgan (RPM / Tony Kart). Morgan was able to double up on the day to record his third and fourth victories of the weekend. The first came in the Trinity Karting Group KA100 Junior division. The championship was still open for him and Noah Baker (Supertune / Tony Kart), who drove from the tail of the field to 10th in the Prefinal. Morgan led 14 of the 16 laps in the main event, breaking away on the final circuit as they fought for second place behind him. The victory helped to lock up his second straight SKUSA Pro Tour championship in the category, and his career fifth. Jeremy Fletcher (TF / Tony Kart) was second with Ayden Ingratta (SCR / Redspeed) making a solid charge to third by the line. Ingratta, who scored fast lap of the race, was penalized for a pushback bumper penalty, moving Baker up to third with Cooper Shipman (IRM / Tony Kart) and Chase Hand (RPG / Kosmic) completing the top-five. 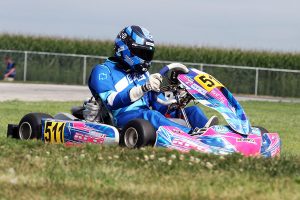 Mario Barrios doubled up in X30 Master for the title (Photo: EKN)

The Parolin USA X30 Junior class saw the lead group begin with three drivers, growing to four and by the end, was up to six in the final laps. Morgan once again led the majority of the laps but was shuffled back to fourth at one point. Championship contender Max Garcia (MGP / WPK) charged up from fourth and took the lead, but was shuffled back in the closing laps. Morgan returned to the point, and led the last three circuits for victory, earning a second straight title in the class and his sixth career SKUSA Pro Tour championship. Justin Adakonis (MDR / Kosmic) drove to second but a pushback bumper penalty dropped him to eighth, elevating Garcia to the second step. Jeremy Fletcher (TF / Tony Kart) completed the podium with Logan Toke (RPM / Tony Kart) in fourth and Cole Kleck (Arcane / Tony Kart) in fifth.

Mario Barrios (RPG / Kosmic) was able to pull off the perfect weekend in the X30 Master class presented by Comet Kart Sales, helping him to claim the series championship. Barrios went unchallenged on Sunday, driving away to an eight-second advantage over Ross Smith (FA Kart) with Krishna Bhat (Tony Kart) in third. 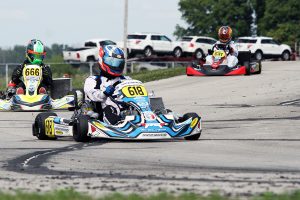 Two come from behind wins in Master Shifter for Ryan Kinnear (Photo: EKN)

Ryan Kinnear (PGR / Ricciardo) was able to complete a second comeback performance on the weekend in the Leading Edge Motorsports Master Shifter division. Kinnear was involved in an opening lap incident during the Prefinal, putting him 10th on the grid for the Final as three-time winner and now five-time series champion Jordon Musser (PSL / Birel ART) was out front in qualifying and the Prefinal. Musser led the first nine laps of the Final before Kinnear was able to work his way up to the top spot. Evan Batt (HMG / CompKart) was right there for a three-driver fight. Batt couldn’t work past Musser as Kinnear kept leading. On the final lap, Musser looked to be under attack from Batt, but in turn went after Kinnear with one final charge down the long straight. At the line, Kinnear earned the victory by 16 thousandths ahead of Musser with Batt a close third. John Crow (Factory Kart) ended up fourth with 2020 champion Skitchy Barnes (HMG / CompKart) in fifth. 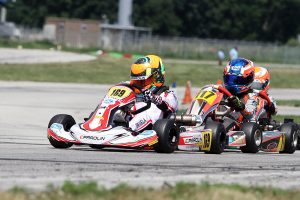 Matias Orjuela doubled up on the weekend in Mini Swift (Photo: EKN)

The day in the Group A Mini Swift class belonged to Matias Orjuela (Parolin USA), who was able to secure a second straight victory on the weekend. Jack Iliffe (IRM / Tony Kart) set fast time in qualifying but Orjuela was able to beat him and brother Oscar Iliffe (IRM / Tony Kart). In the Final, Orjuela was pressured by both Iliffe’s but eventually pulled away to a 1.8-second advantage for the victory. Oscar drove to second with Jack in third, coming up short in the championship chase with Enxo Vidmontiene (Benik) claiming the title. Vivek Kanthan (MDR / Kosmic) ran fourth with Isaac Malcuit (AKT / Kart Republic) putting three Mini rookies into the top-five. 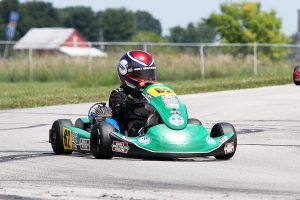 Keelan Harvick (Nitro Kart) added to his 2021 resume with his first SKUSA Pro Tour victory in the Micro Swift by DNJ Intermodal Services class. Harvick jumped out to the lead with Prefinal winner Augustus Toniolo (RPG / Kosmic) searching for maximum points in the title chase. They were joined by Ethan Tovo (Nitro Kart), Tristan Murphy (Nitro Kart) and title contender Gianmatteo Rousseau (Nitro Kart). On the final circuit, Harvick was able to go from fourth to first, crossing the line 32 thousandths of a second ahead of Murphy with Tovo a close third. Rousseau was able to hold off Toniolo by two hundredths at the line, giving him the championship by 16 points.

The 2021 SKUSA Pro Tour completed this weekend in New Castle with a season high total of 254 entries over the nine categories. The focus for Superkarts! USA now turns to a return to Las Vegas and the SuperNationals 24.