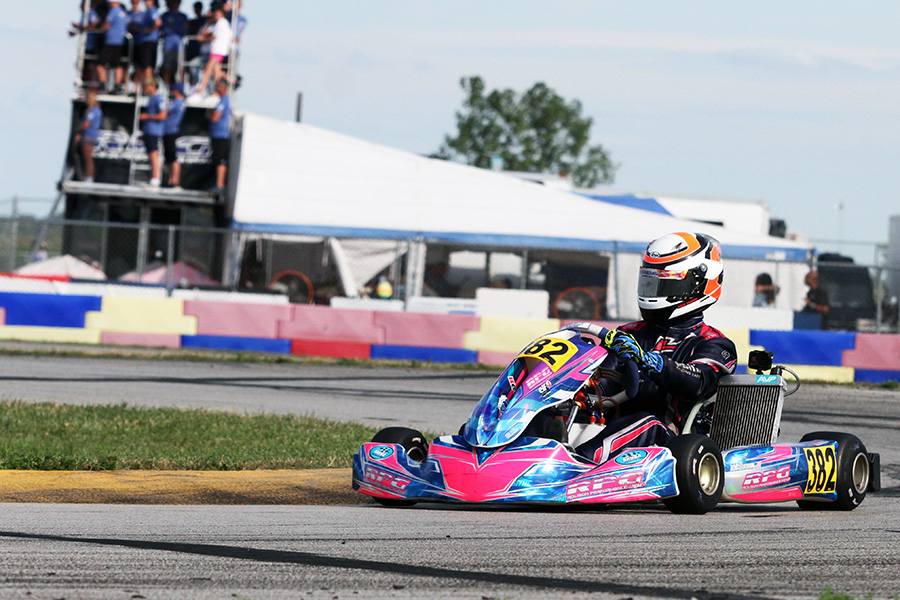 The fifth round of the Superkarts! USA Pro Tour at New Castle Motorsports Park was highlighted by some incredible racing action and more than one drag race out of the I-70 hairpin to the checkered flag.  The 11th running of the SummerNationals will provide the cap to the 2021 national championship, and Saturday’s racing only served to set the stage for Sunday’s finale and the crowning of this year’s national champions. In the Pro Shifter class, which boasted a stunning grid of 30 karts including 16 of the top-20 from the EKN Driver Rankings, PSL Karting’s Jake French renewed his title hopes after holding back Andrew Bujdoso for the victory. An uncharacteristic mechanical DNF put point leader AJ Myers on the sidelines during the opening lap, which has blown the championship wide open. The X30 Senior title fight remains in the hands of the Rolison Performance Group, and while the team has three drivers vying for the championship, it was one of their drivers not in the title chase Nate Cicero who pulled steadily away from the stacked field to score his first SKUSA Pro Tour victory.

The Rolison Performance Group X30 Senior focus was on the championship with three drivers in the hunt. In third, four-time champion Ryan Norberg (RPG / Kosmic) suffered issues in the Prefinal and Final, ending his chances at a fifth title. Second-place driver Hannah Greenemeier (RPG / Kosmic) set fast time in qualifying for the 10 bonus points. It was teammate Nathaniel Cicero (RPG / Kosmic) that came out of the Prefinal with the a provisional win until a pushback bumper penalty dropped him down to fourth and put Jake Drew (RPM / Tony Kart) on the pole position for the Final. A wild opening lap saw Cicero come away with the position and Pauly Massimino (RPM / Kosmic) in second, as they were able to get away from the madness behind them. Cicero put down consistent lap times to extend his lead lap after lap, driving to an eight-second advantage at after 16 laps. Massimino came under attack late as Braden Eves (MPG / WPK) was able to catch and take over the second spot. Cole Morgan (RPM / Tony Kart) ended up winning the battle for fourth with championship leader Branyon Tiner (RPG / Kosmic) improving four stops to fifth. 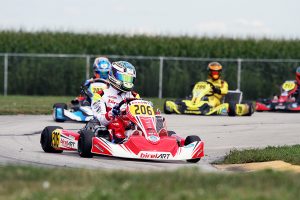 The day looked to belong to AJ Myers (Magik Kart USA) in the PSL Karting Pro Shifter category, featuring a record 30 drivers. After missing out on the fast time in qualifying by one tenth to Kyle Wick (GFC / Trackmagic), Myers dominated the Prefinal. His run at the front of the field last just half a lap with engine issues slowing him down and out of the race. That handed the lead to Wick, who lead for five laps until Jake French (PSL / Birel ART) took over. French was able to show the way with pressure coming late from Andrew Bujdoso (Magik Kart USA). It came down to the final lap and the final inches at the checkered flag with the duo drag racing to the line. French edged out Bujdoso by 15 thousandths for his first victory of the season. Brent Crews (LEM / Formula K), making his first SKUSA Pro Tour start in the category, drove up to a close third by the checkered flag. Billy Musgrave (Factory Kart) drove to fourth with Hunter Pickett (GFC) edging out a group at the line for fifth as Wick was classified eighth. 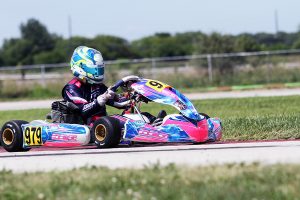 Austin Garrison was able to win in his KA100 Senior debut (Photo: EKN)

It was a great ‘one off’ performance on Saturday in the Nash Motorsportz KA100 Senior by Austin Garrison (RPG / Kosmic). It started out rough with a P15 in qualifying but he negated that with a drive to the win in the Prefinal. He led the opening two laps until Arias Deukmedjian (TKG / Kart Republic) took the point. They drove away from the rest of the 45-driver field to settle the battle for the victory. Garrison held back until lap 13 before pulling the trigger on Deukmedjian for the lead. From there, Garrison was able to hold on for the victory. Thomas Annunziata (MDR / Tony Kart) ran solo in third. Championship leader Cole Morgan (RPM / Tony Kart) won the fight for fourth ahead of Connor Ferris (TFR / Kart Republic). 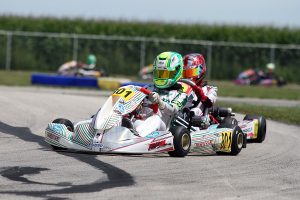 Things were setting up for a great a battle to the checkered flag in the Trinity Karting Group KA100 Junior class. Defending champion Carson Morgan (RPM / Tony Kart) was able to win the Prefinal and was joined at the front of the field in the Final by Enzo Deligny (Parolin USA), making his first start in the USA after racing in Europe all season. Deligny was buying his time until lap 12 when an electrical issue stalled his speed, forcing him to pull off. That allowed Morgan to drive away to his second victory of the season. The fight was for second with Jeremy Fletcher (TF / Tony Kart) able to come away with the position. Helio Meza (IRM / Tony Kart) was third with Noah Baker (Supertune / Tony Kart) fourth and Jesus Vasquez Jr. (Nash / EOS) fifth until after penalties were handed out. Meza was disqualified for an issue in tech, while Baker was handed a pushback bumper penalty. Round Four winner Austin Jurs (Franklin / Redspeed) was moved up to the third spot on the podium with Vasquez fourth and Chase Hand (RPG / Kosmic), who suffered a DNF in the Prefinal after the opening lap managed to improve to the fifth spot, advancing 28 spots in the 16 laps. 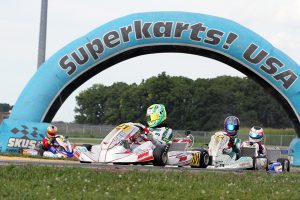 It was a two driver fight in the Parolin USA X30 Junior division with defending champion Carson Morgan (RPM / Tony Kart) and SKUSA Winter Series champ Kai Sorensen (Supertune / Tony Kart) battling. It ended with a drag race to the line with Sorensen out front. Morgan tried a run out the outside midway down the straight. Morgan ended up dropping his right side tires off in the grass, with Sorensen reaching the line first. Sorensen was given a four-position penalty for ‘incident responsibility’ with Morgan, thus giving the defending champ his second victory of the season. Christian Miles (MDR / Kosmic) was P1 in qualifying but was shuffled back in the Prefinal. Miles drove up from 14th to third, ending up runner-up. Noah Baker (Supertune / Tony Kart) was third on the podium with Max Garcia (MGP / WPK) fourth and Sorensen classified fifth. 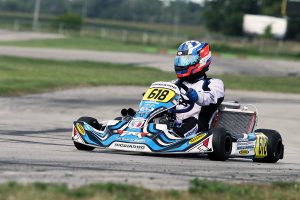 Ryan Kinnear went from last to first in the Final for the Master Shifter victory (Photo: EKN)

A zero to hero performance in Leading Edge Motorsports Master Shifter class for Ryan Kinnear. Making his first start of the 2021 season, Kinnear (PGR / Ricciardo) set fast time in qualifying and drove away to the win in the Prefinal before a track width penalty took the win away and dropped him to the tail of the 14-driver field. Former Super Master champion John Crow (Factory Kart), also making his first start of 2021, jumped out to the lead and was able hold off a pack of seven drivers behind them. Among them was Kinnear, patiently working his way toward the front. Crow came under pressure from both Evan Batt (HMG / CompKart) and Joe Ruch (HGM / Race Factory) until they made contact on lap 14. This allowed Kinnear to slip up into the second spot and on lap 15, take the lead. He led one more circuit to the checkered flag to become the third different winner on the year. Crow ended up second with Nathan Stewart (PSL / Birel ART) putting two Super Master drivers on the podium, slipping past Musser at the line. AJ Noud (CBR / Aluminos) completed the top-five in his return to the SKUSA Pro Tour. 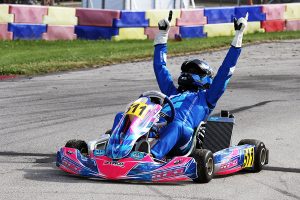 The Comet Kart Sale X30 Master class went down to the wire between the two championship rivals. Mario Barrios (RPG / Kosmic) went all season long without a victory, and was able to sweep the day. Barrios set fast time in qualifying and won the Prefinal. He and championship leader Jess Peterson (PGR / Ricciardo) were battling for the top spot in the Final all race long, deciding the race in a last run to the checkered flag. At the line, Barrios edged out Peterson by 12 thousandths of a second. Ross Smith (F&S / FA Kart) was able to close up for a close third with Krishna Bhat (Tony Kart) fourth and Frank Runco (Magik Kart) fifth. 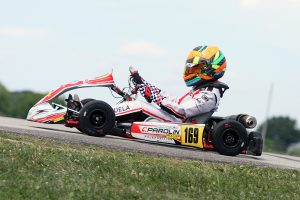 The Group A Mini Swift class was competitive all day long but the 36-driver field was led early by Oscar Iliffe (IRM / Tony Kart). Iliffe was top qualifier and won the Prefinal, and was joined at the front in the Final by his brother Jack Iliffe (IRM / Tony Kart) and SKUSA Winter Series champion Matias Orjuela (Parolin USA), making his first start on the season. Orjuela took over the lead on lap nine, and held the advantage until the last lap. Both Iliffe brothers slipped past as they began the final circuit. As they headed down to the I-70 corner, Jack was leading and left the door open for Oscar to slip inside. Orjuela went through and down the straight to the checkered flag, was able to power past Oscar for the victory by 28 thousandths. Oscar settled for second with Jack in third. Sarah Bradley (Nitro Kart) was close early but drifted back, ending up fourth with Asher Ochstein (Benik) in fifth. 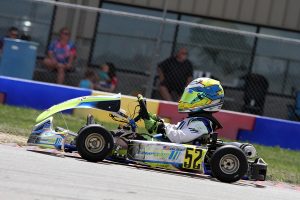 The DNJ Intermodal Services Micro Swift class welcomed a new winner on the season. Both Ethan Tovo (Nitro Kart) and Keelan Harvick (Nitro Kart) were searching for their first wins on the year. Tovo set fast time in qualifying while Harvick won the Prefinal. Harvick led the first half until Gianmatteo Rousseau (Nitro Kart) and Tovo took a turn. At the white flag, Tovo was leading heading into turn one and two when shuffling took place. Lucas Palacio (CompKart) came out with top spot and led the only lap that mattered, the final circuit to cross the line for his first SKUSA Pro Tour victory. Harvick won the battle for second with Jackson Gibson (Kosmic) able to earn his first career podium in third. Championship leader Augustus Toniolo (RPG / Kosmic) was fourth as Caleb Tarter (Nitro Kart) earned hard charger of the race, driving from 20th to fifth.

Everything comes to a close on Sunday and the sixth and final round of the SKUSA Pro Tour championship decides the 2021 title winners. Be sure to follow EKN throughout the day and on social media for updates, photos and more.