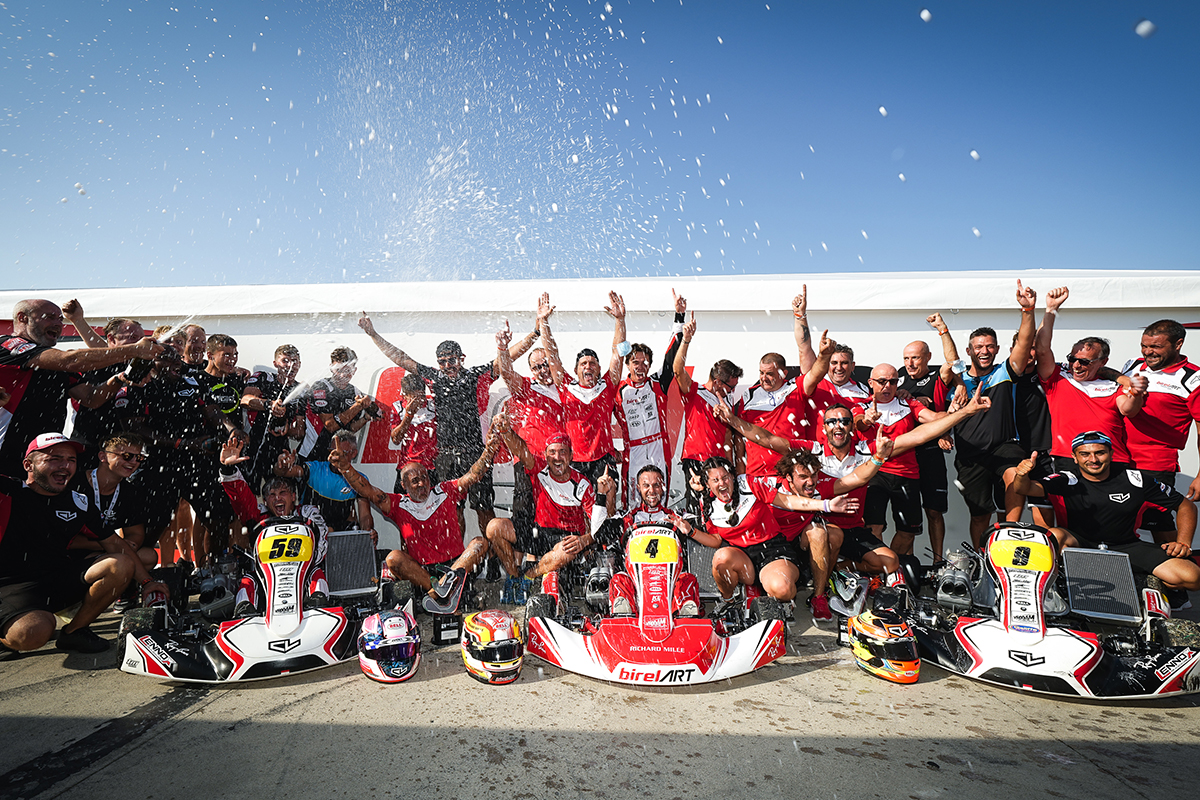 For the second consecutive year, the Birel ART factory has been crowned FIA Karting European Champion in the premier KZ category. After his brilliant victory in Germany, Riccardo Longhi won the title after constant effort and perfect teamwork. In Italy, the Birel ART chassis also distinguished itself with the Charles Leclerc by Lennox Racing team. 2nd in the Final ahead of his team-mate Viktor Gustavsson, Pedro Hiltbrand became European vice-champion, while the young Laurens Van Hoepen finished the European KZ2 Championship in 3rd position.

The European event in Adria was difficult in many respects because of the extreme heat, but also because of all the sporting and technical parameters that had to be managed, starting with the complex, even confusing, use of tyres. It is in adversity that the strength of a team is recognised and the red army remained determined to go for one of the most important titles of the season, the European KZ Championship.

The Charles Leclerc by Lennox Racing team put in a remarkable performance during Qualifying, which ended with three Birel ART-TM Racing teams in the top four: Matteo Vigano was the solid leader with three wins out of three in the heats, while Viktor Gustavsson was 3rd ahead of Pedro Hiltbrand. Meanwhile, Riccardo Longhi and Marijn Kremers were busy working their way up the field after a frustrating Qualifying. “The tyre sets we had were not as good as those used in Free Practice. It’s unfortunate, especially considering that our neighbours from Lennox Racing were really competitive with the same technical package,” commented Riccardo.

Longhi made an excellent start to the Final race from 13th on the grid and was 10th on the first lap. He gained further places throughout the 24 laps of the race to finish in 6th position, synonymous with the European KZ Champion title after the 34 points he scored in Wackersdorf. This triumphant result confirmed the extreme competitiveness of the Birel ART chassis in KZ, as Ronni Sala, President of the famous Lissone factory, admitted: “The situation in Timed Practice was difficult to accept, but we didn’t give up and worked hard. Riccardo Longhi really deserves to be crowned Champion and I would also like to congratulate the Lennox Racing team for the performances of all its drivers.”

Pedro Hiltbrand came 2nd in the Final and secured the runner-up spot. On the podium in Adria, Hiltbrand was joined by Viktor Gustavsson, who climbed to 3rd place after a solid and consistent race at the front. In KZ2, Laurens Van Hoepen had the satisfaction of finishing the European Championship in 3rd position in his first full year in this category.

Hero of the day on the track and happy team manager, Riccardo Longhi did not hide his joy after this dazzling finale. “I am obviously very happy with this title and I would like to thank the team who have always pushed and supported me, TM Racing for their great engines and my team-mate Marijn Kremers who helped me during the weekend. Of course I am disappointed for Guiseppe Palomba. In KZ2, he started the Final with the lead after having won four heats. He had the possibility of winning before an unfortunate collision and has to be satisfied with 6th place in the Championship. We enabled four other drivers to take part in the Final: Alessio Piccini (14th), David Liwinski (15th), Moritz Ebner (27th) and Marcus Funda (29th). As for Thanapongpan Sutumno, he has made further progress since Wackersdorf.”

The focus is now on the KZ World Championship and the KZ2 International Super Cup in Kristianstad, Sweden.