The 12th season of the Superkarts! USA Pro Tour is set to conclude this weekend (August 13-15) with the 11th running of the SKUSA SummerNationals at the New Castle Motorsports Park. A season high of 245 entries over the nine categories will converge on the New Castle, Indiana facility – site of last year’s SKUSA Summer Festival with two weekends of racing featuring six rounds of competition. 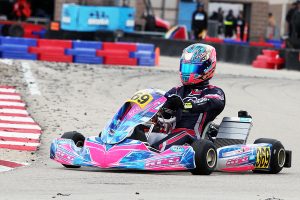 New Castle has been the home of the SummerNationals since 2015, with the SKUSA Pro Tour champions decided from 2017 to the present after the creation of the WinterNationals. The ‘SKUSA Super Mile’ course is the layout for this weekend, similar to what was used the first weekend in 2020, featuring the wild ‘ski jump’ section mixing the ‘national’ layout with the extension area. Weather will be an issue with humidity expected to be high, however, rain is not forecasted for the days of racing.

eKartingNews.com is proud to be the official media partner for all 12 seasons of the Superkarts! USA Pro Tour, providing Trackside Live for every event. SKUSA announcer and EKN’s own Rob Howden will be calling the action all weekend from the SummerNationals. Those unable to attend can listen in to the live broadcast – presented this weekend by Franklin Kart, Leading Edge Motorsports and OTK USA. Bookmark www.ekartingnews.com/live and follow the EKN social media channels for more throughout the weekend in New Castle, Indiana.

This weekend will be Round Five and Round Six of the Superkarts! USA Pro Tour. Each round will feature qualifying, Prefinal (10 laps, 8 for Cadet) and Final (16 laps, 14 for Cadet). This year’s championship is a best five of six, with driver’s looking to make up for errors earlier on the season or continue the momentum toward a 2021 SKUSA Pro Tour title. 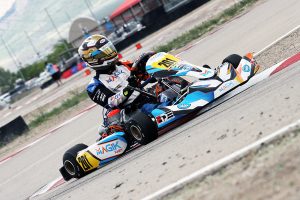 The championship in the X30 Senior division is done to three drivers, all under the same tent. Rolison Performance Group / Kosmic drivers Branyon Tiner, Ryan Norberg and Hannah Greenemeier are the top-three drivers in the title chase heading into the weekend. The trio is separated by 130 points with Tiner leading without a win over the first four rounds. Greenemeier is the most recent and newest winner, scoring the victory in Round Four in Utah, trailing by 97 points. Four-time champion Norberg won Round Three, but needs to have a clean weekend ahead of his two teammates and rivals within the class in order to claim that coveted fifth title. Fourth in the standings is Connor Zilisch (Team Nitro / Tony Kart), who has elected to sit out the event due to the DQ suffered in Round Three when he lost a tire in the Final. That will move Dante Yu (PGR / Ricciardo) into the fight for fourth in the standings to close out 2021. With a field over the 30-mark, it will be another exciting weekend in the headline TaG division.

The Pro Shifter category will be welcoming its largest field of the season with 29 drivers on the pre-entry list. Most of the field will be gunning for the top spot of the podium both days, including 15 of the top-20 from the EKN Shifterkart Driver Rankings, with only two drivers in the mathematical hunt for the championship. That is led by two-time champion and four-time 2021 race winner AJ Myers (Magik Kart USA). He holds a 200-point advantage over former champion Jake French (PSL / Birel ART) going into the weekend. The wildcard will be all the other drivers in the field that have a shot at the top step of the podium on the weekend. Former champ Danny Formal (LEM / Formula K) is making a return alongside SKUSA Winter Series champion Brent Crews (LEM / Formula K), making his Pro Tour debut. GFC Karting has a star-studded lineup, including 2019 champ Kyle Wick (Trackmagic), 2020 COTA champion Hunter Pickett (GFC) and top qualifier in Utah Jacob Gulick (GFC). 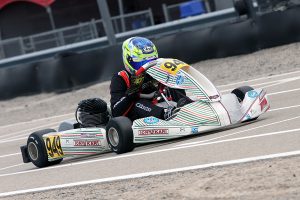 Cole Morgan leads the KA100 Senior standings in what is sure to be a close battle to the end (Photo: EKN)

The title chase in KA100 Senior could be a repeat of 2019 when it was decided on the track, and then off the track after the final checkered flag. Current championship leader Cole Morgan (RPM / Tony Kart) holds a 68-point advantage over Jace Park (TKG / Kart Republic). Morgan, however, comes in with a handicap having suffered an unsportsmanlike conduct DQ in Round Four at Utah. That is a result he will not be able to drop, and thus puts more of an emphasis on him finishing ahead of those in the title chase. The problem is four drivers are within 177 points going into the weekend. 2019 champion Austin Osborne (IRM / Tony Kart) is not stranger to drama, winning after a chaotic final race. He trails by 108 points with Round Four victor Nolan Allison (RPG / Kosmic) there in fourth, off by 168 points. Blake Nash (Nash / EOS) sits fifth, hoping to be in the mix depending on how the weekend unfolds. Those in the championship chase still have to compete against those in the 43-driver field gunning for a spot on the podium. Former SKUSA champion Brandon Lemke (FMS / Merlin) is no stranger to winning at NCMP, as is Arias Deukmedjian (TKG / Kart Republic).

The KA100 Junior championship hunt is just as close with eight drivers with 200 points going into the SummerNationals. Parker DeLong (RPM / Tony Kart) has yet to win over the opening four rounds but leads the point standings. His lead is a slim 16 points head of two-time race winner Noah Baker (Supertune / Tony Kart). Jack Jeffers (SCR / Redspeed) is third in the chase, only 47 points out of first, but is not registered for the class, only X30 Junior. Round Four winner Austin Jurs sits fourth only 76 points back. Chase Hand (RPG / Kosmic), defending champion Carson Morgan (RPM / Tony Kart), Helio Meza (IRM / Tony Kart) and Cole Kleck (Arcane / Tony Kart) are over 100 points back but within range depending on how the weekend unfolds in the 34-driver class. 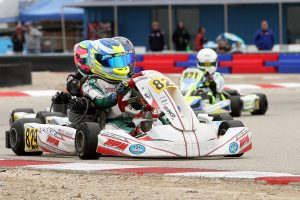 Carson Morgan (RPM / Tony Kart) was able to double up in the championships in 2020, coming in as the defending champion and current point leader in the X30 Junior division. Round Four victor Morgan has a 66-point advantage over Round Three winner Max Garcia (MGP / WPK) while two-time winner Jeremy Fletcher (TF / Tony Kart) is only 94 points back. Noah Baker (Supertune / Tony Kart) is not out of it yet, sitting 144 points out of first. The 29-driver field will welcome two drivers back to the USA and the SKUSA Pro Tour. Two-time SKUSA champion and SKUSA Winter Series title winner Kai Sorensen (Supertune / Tony Kart) is back in the USA after spending much of the season in Europe, as is Enzo Deligny (Parolin USA).

The Master Shifter class got a bump for the SummerNationals with at least 13 drivers set to battle at New Castle. Four-time SKUSA champion Jordon Musser (PSL / Birel ART) has a 142-point lead over defending champion Scott ‘Skitchy’ Barnes (HMG / CompKart). Musser has three wins to Barnes one. The wildcard will be the first-time starters on the 2021 campaign with former SKUSA champs Ryan Kinnear (PGR / Ricciardo) and John Crow (Factory Kart) along with Master ‘young guns’ Evan Batt (HMG / CompKart) and Joe Ruch (HMG / Race Factory). 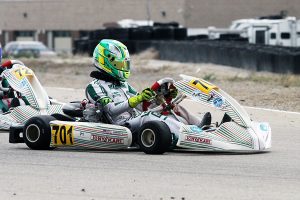 Numbers did not increase in the X30 Master division with only six pre-entries for the SummerNationals. Championship contenders Jess Peterson (PGR / Ricciardo) and Mario Barrios (RPG / Kosmic) will battle alongside Round Four winner and 2019 champion Matt Johnson (Nash / EOS) on the weekend.

The championship in Mini Swift is Enzo Vidmontiene’s to lose. The Benik driver has three wins in the first four rounds, holding a 125-point advantage over Mini rookie and Round Three victor Jack Iliffe (IRM / Tony Kart). Diego Ardiles (Supertune / Tony Kart) has an outside shot at the title, sitting third and back by 214 points. The field is at 36 drivers, including SKUSA Winter Series champion Matias Orjuela (Parolin USA) set to make his 2021 Pro Tour debut.

The Micro Swift standings also has a driver yet to win on the season leading the way. Augustu Toniolo (RPG / Kosmic) has a 43-point lead in the standings despite no wins over the first four rounds. Double WinterNationals winner Gianmatteo Rousseau (Nitro Kart) is second in the standings. Round Three victor Tristan Murphy (Nitro Kart) is only 82 points back with Ashton Woon (Nitro Kart) still mathematically in the hunt at 167 points out of first. Round Four winner Phaethon Saradpon (AKT / Kart Republic) is on the outside looking in, 223 points back in fifth. Joining the 25-driver field in New Castle will be recent IAME USA Grand National Championship winner and SKUSA Winter Series champion Keelan Harvick (Nitro Kart), looking to grab his first Pro Tour victory of his career.

Be sure to follow EKN all weekend long, including the live audio coverage on Saturday and Sunday along with the social media channels for photos, videos, updates and more at the SKUSA Pro Tour SummerNationals.