Maximum Intensity for the RMCIT Finals 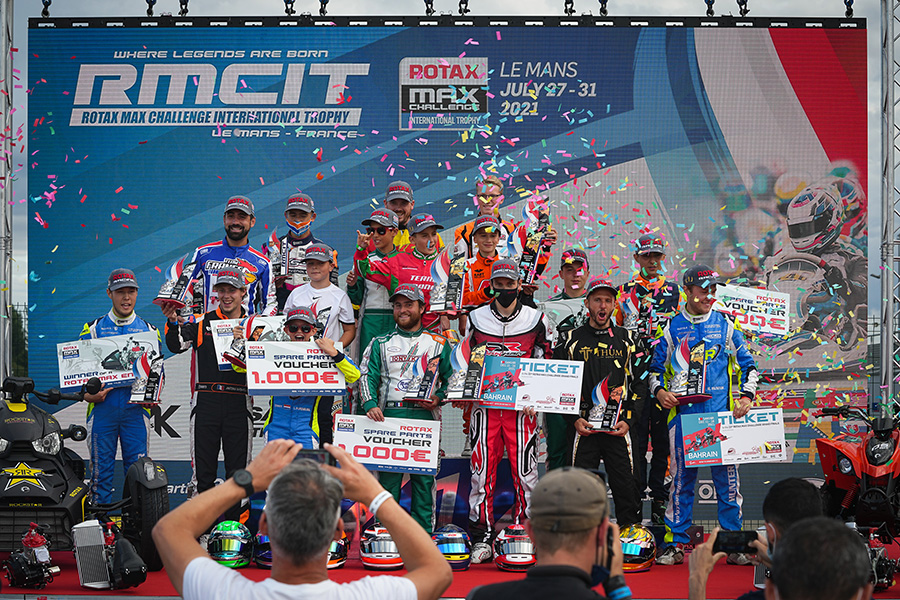 The Rotax MAX Challenge International Trophy ended with spectacular Finals on the Le Mans circuit. The twelve races on the programme of this last day were full of intensity for the greatest enjoyment of all the participants.

The winners of this third edition were rewarded with Can-Am DS 90 quads in the Micro and Mini MAX categories as well as coveted tickets for the Rotax MAX Challenge Grand Finals which will take place in Bahrain from 10th to 18th December 2021 for the Junior, Senior, DD2 and DD2 Masters categories. The runners-up won Rotax MAX engines in their categories and the 3rd-placed drivers won €1,000 in Rotax vouchers.

The 2021 edition was marked by the general good attitude of the competitors which allowed the competition to run smoothly and safely. The races were all the more exciting to experience and to follow. The Le Mans track allowed the best talents to be showcased and demonstrated the extraordinary competitiveness of the Rotax categories as well as their outstanding reliability. The weather was good in Le Mans during the entire event and the Mojo slicks perfectly met the expectations of the drivers.

Paul Schön (CHE – KR – MH Racing) won everything from the Timed Qualifying to the Final of the Micro class. Very fast, he won with the precision and consistency of a Swiss watch with an impressive margin over his rivals. Delayed in one heat, Uros Bogdanic (SRB – Kosmic – Sport Sill) was first 3rd in the Prefinal before reaching the second step of the Final podium. Tom Papenburg (NLD – KR) made a great comeback in the Final by finishing 3rd.

Micro winner of the previous edition, Christopher El Feghali (LBN – KR) won this year in the top category. He had to show perseverance to turn his situation around after having dropped to 9th place in the heats. His victories in the Prefinal and the Final definitely proved his worth against strong opponents such as Mateja Radenkovic (BEL – Tony Kart) and Max Sadurski (NLD – Energy – FJ Motorsport), who had already finished 3rd in the Micro class last year in Portimao.

Kai Rillaerts at the top in Junior

Kai Rillaerts (BEL – Exprit – JJ Racing) won almost everything in the Junior category, which is full of promising drivers. His success is all the more deserving as he had to fight each time with great determination to keep 1st place. In constant battle with the leader during the whole event, Téo Blin (FRA – Tony Kart) and Farin Megger (DEU – Exprit – JJ Racing) formed a very deserving podium with Rillaerts.

Between them, Kai and Rhys Hunter (GBR – Kosmic – Dan Holland Racing) won every possible Senior race. The youngest, Kai, took pole position, before winning four heats, while his elder brother won five heats and the Final. Kovacs Zsombor (HUN – Exprit – KMS Europe) did not make it easy for them in the Qualifying Heats, while Enzo Caldaras (FRA – Kosmic – KPR) managed to reach the podium in the Final.

DD2: Daniel Machacek at the finish

Another driver, Antoine Barbaroux (FRA – Birel ART), clearly dominated the Qualifying phases as well as the DD2 Prefinal. But despite all his efforts, he could not get ahead of his rival Daniel Machacek (AUT – KR – VPDR) who had a remarkable Final. The competition was strong behind them and it was finally Nicolas Picot (FRA – Tony Kart – NPS) who finished in 3rd place in the Final after a seven place climb.

Rudy Champion (FRA – Kosmic) did not start the competition very well. Only 10th in the heats due to a retirement, he made an impressive comeback to lead the Prefinal before having a superb duel with Paul Louveau (FRA – Redspeed – DSS) in the Final. Qualifying poleman Denis Thum (CYP – Tony Kart) won his place on the podium after a strong Final run.