Night racing at Speedsportz hosts fourth round of 2021 program 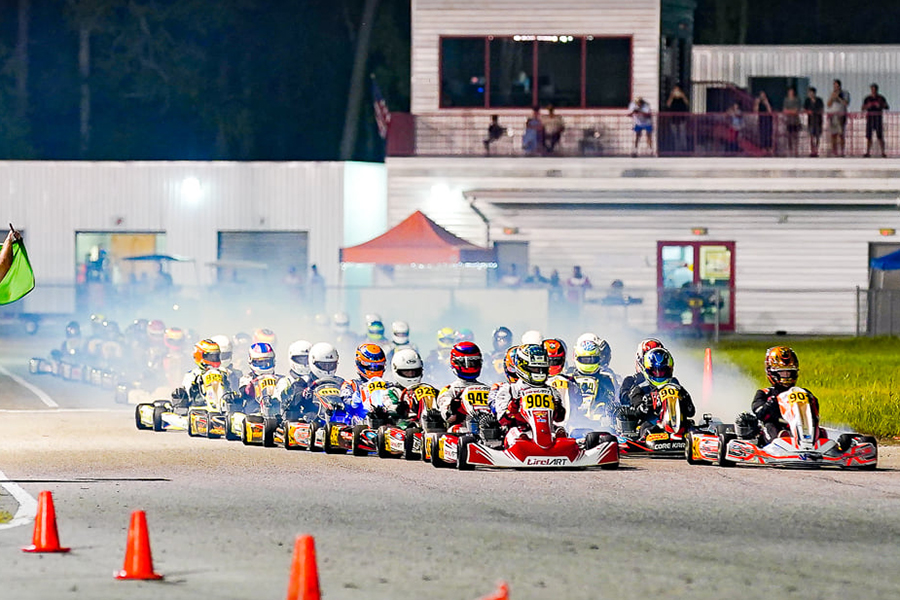 The Texas Sprint Racing Series traveled to the Speedsportz Racing Park for a second straight event, hosting the Midsummer Mashup at the New Caney, Texas facility. The weekend was unique, featuring racing under the lights over a Thursday through Saturday stretch on July 22-24. The nine categories featuring IAME and Briggs & Stratton powerplants contested the penultimate round of racing, with drivers eyeing the year-end championships with strong performances at Speedsportz.

A new record mark has been set for the Exertech KA100 Senior category with 45-drivers racing this past weekend. They were led through qualifying by Jake French, posting a 55.018-lap to secure fast time over the two groups. Drivers were split up for the two rounds of heat races. In the opening heat, French was shuffled back at the start allowing Branyon Tiner to drive away to the victory. Round One winner Josiah Tracy and French would win the next two heats before Tiner won the final race to set the grid for the main event. Tiner and French went back and forth through the opening laps of the Final. Tiner held the spot for much of the race. French took back the lead on lap 11, with more fighting the following lap that resulted in French losing several positions. Tiner led the final two laps toward a second straight victory. Logan McDonough and Tracy joined him on the podium with Ethan Arndt fourth and Drew Chappell in fifth. 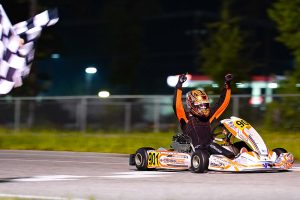 The KA100 Junior presented by Fullerton Motorsports class welcomed its fourth different winner on the season. Qualifying was close for the 25-drivers in the field with the top-three separated by just 76 thousandths. Camryn Reed led the way ahead of Round Three winner Helio Meza and Cooper Shipman. Meza was able to get away in the opening heat race before fighting off Shipman for the win in the second heat. Meza led the opening 14 laps of the Final with Aden Rudolph advancing up to second. On lap 15, the two were shuffled down the order, allowing Shipman and Reed to take over the top two spots. Shipman led the final few laps to record his first victory of the season. Reed ended up second with Ashlyn Speed earning her first series podium in third. Brayden Robertson was fourth with Meza able to worked his way back up to fifth by the checkered flag.

Miguel Mier has put in four perfect performances thus far in 2021 for the KA100 Master presented by Kart Racing Solutions category. Mier cleared the 12-driver field by over four tenths in qualifying with wins of two seconds and four seconds in the heat races. Mier continued to put down fast laps in the 20-lap Final, driving to a 10-second advantage at the checkered flag for his fourth victory of the season. James Lundberg was second in his series debut, edging out Martin Stone. Defending champion Doug Foxworth was fourth with Matt Berendt completing the top-five. 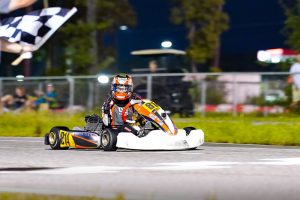 A wild finish in KA100 Junior with Cooper Shipman crossing the line for the victory (Photo: Ken Johnson – Studio52.us)

Oscar Iliffe is now three for three in the Mini Swift class presented by Alan Rudolph Racing Academy. Iliffe missed the Summer Shootout in June due to racing in Europe. His return to TSRS began with fast time in qualifying over the 14-driver field. Heat #1 ended with a wild finish as Round Three winner Ragan Saville was leading at the white flag until contact sent him off the course. Santiago Duran was the driver to cross the line first but a 3-second penalty for jumping the start dropped him down to sixth. Iliffe was second but a 3-second penalty for incident responsibility with Saville moved Oscar to the seventh spot. That gave Diego Guiot the race win. Heat #2 was another wild race, going down to the wire with Iliffe earning the win. Guiot led the opening nine laps of the Final until he was shuffled back, allowing Iliffe and Saville to battle for the top spot. They exchanged the led several times with the final lap deciding the victory. Saville was shuffled back to sixth on the final circuit as Iliffe got away, earning his third on the victory. Jack Iliffe was able to fight his way forward to grab runner-up, just 88 thousandths behind his brother at the checkered flag. Tyler Roberts was a close third with Duran and Guiot rounding out the top-five. 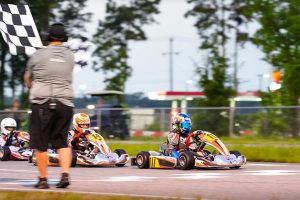 The Micro Swift category presented by PFX Storm Shelters welcomed its first two-time winner on the season. Round Two winner Bobby Klein was able to clear the 13-driver field by two tenths in qualifying before going on to win the opening heat race. Klein led all but the last lap in the second heat with Sawyer Chambers able to slip past for the race win. Chambers was pushed back at the start of the Final with Round Three winner Gage Bailey joining Klein for the battle at the front. After swapping the lead several times, Klein secured the top spot for the final few laps, going on to win his second on the season. Bailey was a close second with Alex Chandler edging out Chambers and Matthew Dukette for his first podium finish on the season in third. Chambers was penalized for a starting infraction, moving Dukette to fourth with Sawyer classified fifth.

Two drivers have won the four main events on the season in the 206 Senior class presented by 4T Concrete Pumping. Round Two winner and defending champion Ethan Wolfe edged out two-time winner Adrian Cruz by six thousandths in the qualifying session. Cruz was able to beat Wolfe to the line in both heat races for the wins. They went back and forth for the top spot throughout the 19-lap Final. On the last circuit, Wolfe was able to secure the lead and his second victory on the season. Cruz fell to fourth with Barry Peel and Braxden Tregre – who posted fast lap of the race – joined Wolfe on the podium. Aidan Smith completed the top-five in the fifth position. 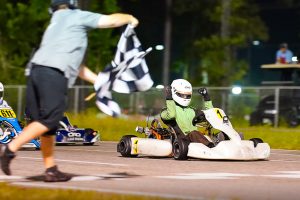 Caiden Wolfe was able to repeat for a second straight month in the 206 Junior presented by Core Karting division. Austin Higginbotham beat out the 11-driver field for quick time in qualifying, edging out defending champion Robert Warren Jr. by three thousandths of a second. In fifth was Wolfe, who drove up with fast laps of the race to win Heat #1. Wolfe could only finish fifth in Heat #2 as Higginbotham held on to win. Higginbotham led early in the Final until Wolfe, starting fourth, took over on lap four. Philip Winegart made his bid for the victory when he assumed the point on lap eight. On the final circuit, Wolfe was able to grab the lead and reach the line first for his third victory on the season. Higginbotham, who recorded fast lap of the race, was a mere 29 thousandths off at the checkered flag with Winegeart back to third. Defending champion Robert Warren Jr. was fourth with Jenson Harrell in fifth.

Also repeating a victory at Speedsportz was Ragan Saville in the 206 Cadet presented by Saville Electric class, featuring 21 drivers. Saville was able to complete the sweep on the weekend, leading from qualifying to the final checkered flag. Each heat race was wire-to-wire with margin of victory over 12 seconds in both. The main event was red flagged at the opening lap. Saville spun during the circuit but continued and restarted the race in the last position. It took Saville nine laps, posting quickest lap time of the race, to reclaim the top spot. He would go on to earn his fourth victory on the season. Tyrone Kemper Jr. won the fight for runner-up ahead of Mason Barry. Jaxon Young was fourth with Derek Wargo driving to fifth. 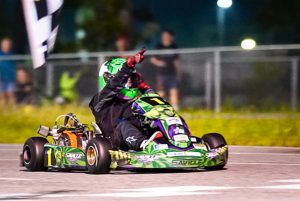 From last to first in the 206 Cadet main event for Ragan Saville’s fourth victory on the season (Photo: Ken Johnson – Studio52.us)

Three straight victories for Pasha Ali in the Honda Kid Karts by A&M Excavating class. Ali was quickest of the seven drivers in qualifying, winning both heat races and scoring the victory in the main event by 20 seconds. Colton Schniegenberg drove to second with Andrew Anastasio in third. Tanner Barsch and Aloy Steinbrunner completed the top-five.