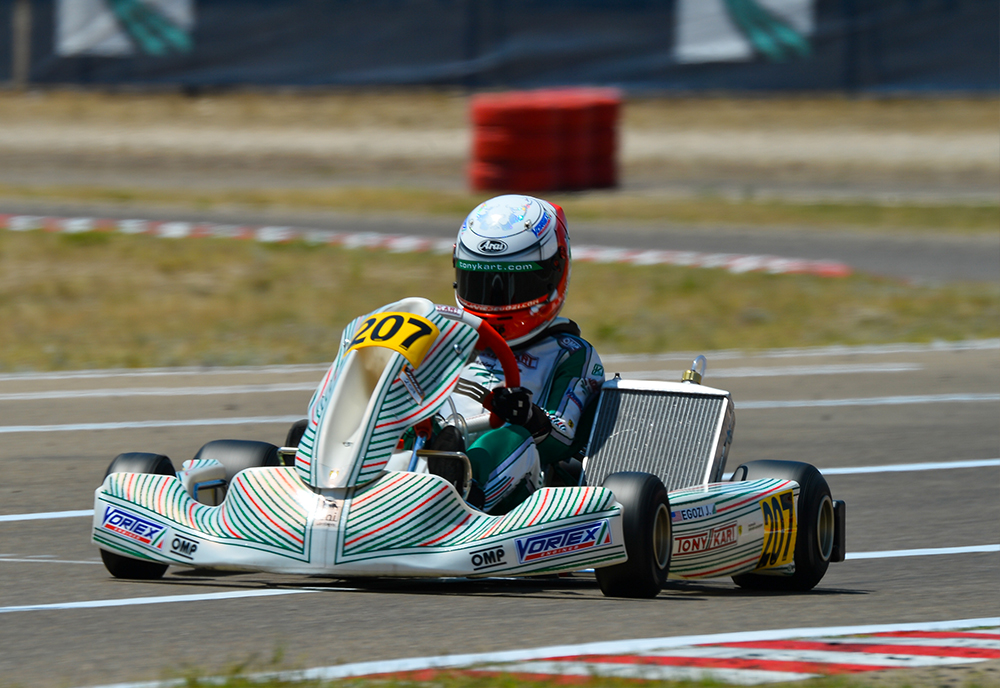 The fourth and last round of the FIA Karting European Championship reserved to the single-gear classes, on the International Circuit of Zuera, gives our Racing Team a third place in the OK class, conquered by our Tuukka Taponen.

The 2021 FIA Karting European Championship’s season, reserved to the OK and OK classes, comes to its conclusion. On the Spanish circuit of Zuera, our Tony Kart Racing Team signs a podium and several important results with the Tony Kart Racer 401R chassis, powered as usual by the Vortex DST engines for the OK and by the Vortex DJT for the OKJ, designed, manufactured and developed by the “engine division” of the OTK Kart Group.

In OK class, Tuukka Taponen is constantly among the top drivers of the category and collects four results on the podium during the four qualifying heats. The Finnish driver starts from the second row in the final of the weekend, chases until the half of the race the driver ahead of him in second position and crosses the finishing line third. What a pity, instead, for Joseph Turney: in the final, since the first bends, the British driver fights for a position on the podium, but a collision with another driver forces him to retire prematurely. A result that does not reflect the real performance of Turney who, in fact, during the qualifying heats, recovers a total of 15 positions compared to Friday’s qualifying. On his home track, Bruno Del Pino immediately enters the Top 10 in the qualifying and plays good heats which confirm his position in the ranking, but in the final he abandons the race early due to a technical problem.

In OKJ class, it’s our James Egozi who signs the best result of our Racing Team, getting very close to the podium in the final. The American driver, despite his still little experience in the Junior category, is competitive since the qualifying session with a solid Top 5, followed by two second places and a fast lap in the qualifying heats. Unfortunately, a 10-second penalty for the incorrect position of the front fairing sets Egozi back in the overall standings at the end of the heats, but the American does not give up: in fact, in the final he climbs 11 positions up to 4th place. Also positive is Keanu Al Azhari’s performance: at his second attendance with our colours, he obtains a second and a third position in the heats, while in the final he gains 7 positions reaching the Top 6: in the final podium the Polish driver scores the best timinge in his group and obtains the third position in the overall ranking. Two victories and a third place allow Przyrowski to be on the starting grid of the last race in the Top 10, but the bagarre penalizes his performance. Alexander Gubenko finishes not far from his teammate Przyrowski, also with a good performance during the qualifying heats where a third place emerges as his best result.                            With the memory of his victory in the third European round at Sarno still fresh in his mind, Harley Keeble starts his weekend with difficulties due to an ignition problem in the qualifying which does not allow him to go beyond the 70th timing. The British driver rolls up his sleeves and shows off perfectly in the qualifying heats: five remarkable comebacks and a fast lap, rewards him with a climb of not less than 51 positions and the pass for the final. And right in the first laps of the final, Keeble even manages to threaten the Top 10, but bad luck still falls on him: an accident involving other drivers too puts an end to the dreams of glory of our driver.

The Tony Kart Racing Team can catch its breath after the numerous recent commitments. In three weeks, in fact, our sporting division will be engaged at the Adria Karting Raceway for the second (and last) round of the FIA Karting European Championship for KZ-KZ2 categories, from August 13th to 15th.