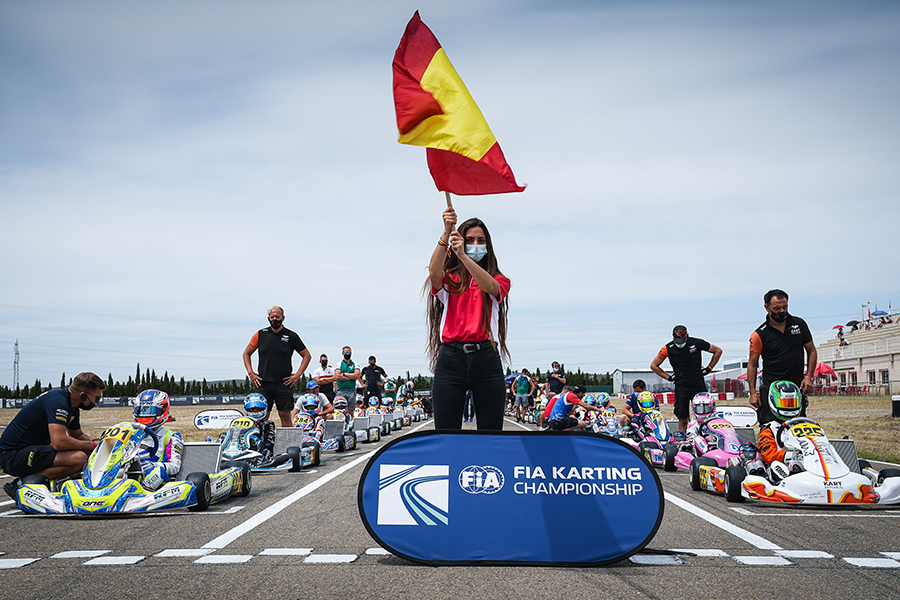 The 2021 FIA Karting European Championship – OK & Junior ended in Spain with a highly spectacular competition. In a fine display, Italy’s Andrea Kimi Antonelli in OK and Britain’s Freddie Slater in Junior were crowned after winning their respective finals. The way in which they each managed their European performance is a testament to their great talent with great promise for their future careers.

The final day of racing on the 1699m Zuera circuit was at least as spectacular and competitive as the previous days. All four European Championship events have been extremely selective since May, with the conclusion on Spanish soil reaching a peak of intensity. 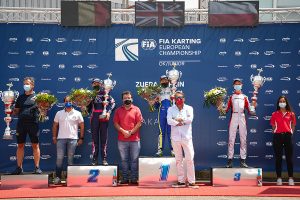 Powell followed closely behind Slater at the start of the Final, but it was Tomass Stolcermanis (LVA – Energy Corse/TM Racing/MG) who threatened him. On the third lap, a collision occurred between several karts including those of Ferreira and Harley Keeble (GBR – Tony Kart/Vortex/MG). The positions in the leading quartet tightened and Stolcermanis took the lead ahead of Eyckmans, Powell and Slater. Slater had nothing to fear for the title, but he was not satisfied with his position. Between Eyckmans and Powell, the second place in the championship was at stake.

Stolcermanis lost ground from lap 9 onwards, Eyckmans took the lead and Slater was back in the battle. The gaps were small as the finish approached. The last lap was epic. Slater managed to get ahead of Eyckmans on the wire and gave his Ricky Flynn Motorsport team an incredible victory, while Powell and Stolcermanis retired after contact. Maksim Orlov (RUS – Parolin/TM Racing/MG) took third place after a 14-place climb. James Egozi (ITA – Tony Kart/Vortex/MG) finished 4th with 11 places recovered and Rashid Al Dhaheri (ARE – Parolin/TM Racing/MG) took 5th position. Despite his retirement at the beginning of the race, Ferreira managed to keep second position in the Championship.

Antonelli above the fray in OK 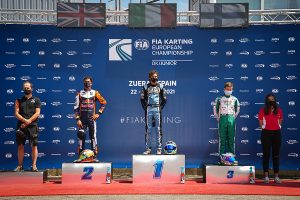 The last two qualifying heats on Sunday morning confirmed the leadership of Andrea Kimi Antonelli (ITA – KR/IAME/MG) despite the victory from Ugo Ugochukwu (USA – KR/IAME/MG). Rafael Camara (BRA – KR/IAME/MG) showed his ambitions by winning the other heat. Nikola Tsolov (BGR – KR/IAME/MG) was to start on the front row next to Antonelli, with Arvid Lindblad (GBR – KR/IAME/MG) and Tuukka Taponen (FIN – Tony Kart/Vortex/MG) sharing the second row of the final grid.

The nervousness of the finalists of the FIA Karting European Championship – OK at Zuera was clearly perceptible with two false starts before the race could really get underway. Immediately after the lights went out, a collision between several karts led to the launch of the ‘slow’ procedure. At the restart, Antonelli was in the lead despite pressure from Lindblad. Taponen was third, and Camara had to wait until lap 7 to recover his 6th position on the grid. Antonelli accelerated as usual as the race approached the halfway point and disappeared from the horizon of his rivals. Lindblad distanced himself from the threat of Taponen while Camara moved up to 4th position, a situation that allowed him to overtake Lindblad in the Championship. Antonelli savoured his and his KR Motorsport team’s triumph by winning the race by more than 5.5″ to be crowned European OK Champion for the second time. Behind Lindblad, Taponen and Camara, Matheus Morgatto Alvarenga (BRA – Birel ART/TM Racing/MG) reached fifth place after a 16-place climb.

The results of the Zuera competition are available on the official FIA Karting Championship app for mobile devices and on the website www.fiakarting.com.

Ugo Ugochukwu (KR Motorsports) was the lone USA driver at the series finale, looking to end it with a victory. Qualifying fourth overall, he was second in the opening heat before issues in the next two heats. His Heat #4 ended with a win, putting him 22nd on the grid for the Final. Contact at the opening corner took Ugo out of the race, ending the series in the dirt.

The weekend in OK Junior began strong for USA with Kai Sorensen (Forza Racing) earning his first pole position in the European Championship. Sorensen ended up with five top-10 results in the heats to line up P13 for the main event. Ahead of him was Jamaican Alex Powell (KR Motorsport). Powell qualified 18th but fought forward in the heats, including one win and four other top-five finishes to end up inside of row two for the Final. Powell was in the hunt to become the first Jamaican to win at the European Championship. A wild last lap resulted in contact, and took him out of the race. This handed the top spot for North America over to James Egozi (Tony Kart Racing Team). The Florida driver qualified fifth, but his last heat was a P15, dropping him down to 15th for the start of the final. He climbed his way into the top-five late, and took advantage of the last lap contact to record the fourth place result, ending the series in P5 for the championship. Caleb Gafrarar (Leclerc by Lennox Racing) had a chance to make his first Final at the European Championship. Gafrarar was 11th at the line in his final heat, but a 10-second penalty for causing a collision relegated him down to the 25th position. That added to his point total, landing him 47th and out of the Final.