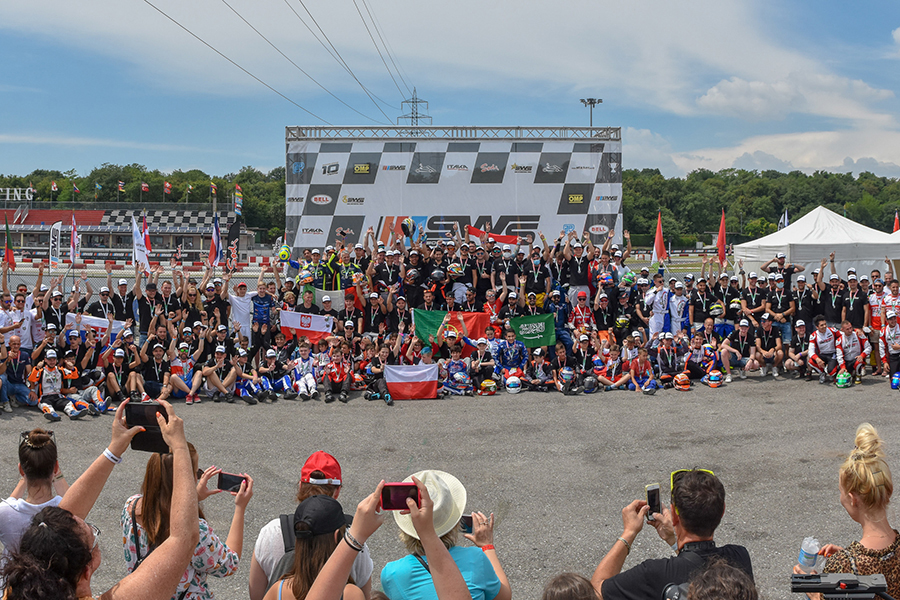 The 2021 edition of the SWS International Finals was a great success from 15th to 17th July in Italy at the famous South Garda Karting track in Lonato. 295 participants and 34 nations competed in the Sprint Cup, Junior and Junior Kid Cups as well as the Endurance Cup in a 12-hour race.

Although the infection-control constraints were still present, all precautions were taken to mitigate the effects while offering three days of intense racing. The SWS once again demonstrated its worldwide attractiveness thanks to the selection of the best leisure drivers rewarded by a highly competitive international event. The strong understanding with the Italian authorities and with the South Garda Karting team were important elements of the 2021 success.

The Lonato circuit, a legendary track for top-level karting, also won over the elite of leisure karting with its rhythmic layout alternating fast parts and winding sectors to offer incomparable selectivity. The competitors of the SWS Finals appreciated the chance to participate in a major event on such a large scale. The flawless organisation and responsiveness of 3MK Events to the weather conditions in conjunction with the Sodikart personnel ensured the highest quality standards for this outstanding event, to the delight of all participants.

The 76 participants in the Sprint Cup competed for two days using very fast Sodi Sport – J125s, which allowed them to enjoy the Lonato track during their numerous heats.

45 teams took part in the 12-hour Endurance Cup thanks to the specification of the Lonato track and to the qualities of the new Sodi RT 10, the flagship of the Sodi range. The standard was high with many experienced drivers among the 180 participants from some twenty nations. Joker Team (FRA) took pole position in Qualifying ahead of PS&A – Advogados (PRT) and SMO Racing Team (ITA), who were grouped together in less than a tenth of a second. The start took place at 10:41 am sharp in true Le Mans style. The battle began immediately between MRK Pro (FRA) and Kart&Diem Pro (FRA), then PFV (ITA) and Infinity (ITA). PS&A – Advogados (PRT) and FPN Racing (FRA) then joined the battle for the lead. At the halfway point, MRK Pro was leading on the same lap as PS&A – Advogados and Sunlife Racing Team (ITA) was 3rd. The duel continued at the front until PS&A – Advogados fell behind in the ninth hour. PFV was running on the same lap as the leader MRK Pro with Kart&Diem Pro in ambush at one lap. PS&A – Advogados was back in 1st place with an hour to go. The end of the race was thrilling. MRK Pro won by 42” after 12 hours of racing and 615 laps against PS&A – Advogados. Infinity finished strong in 3rd position, 4″ behind the 2nd place. Six teams finished in the same lap, sometimes in the same second.

Of course everyone regretted the impossibility to organise a closing ceremony worthy of the SWS Finals this year for infection-control reasons. However, the winners were rewarded as planned and a fireworks show greeted the success of the SWS 2021 Finals.