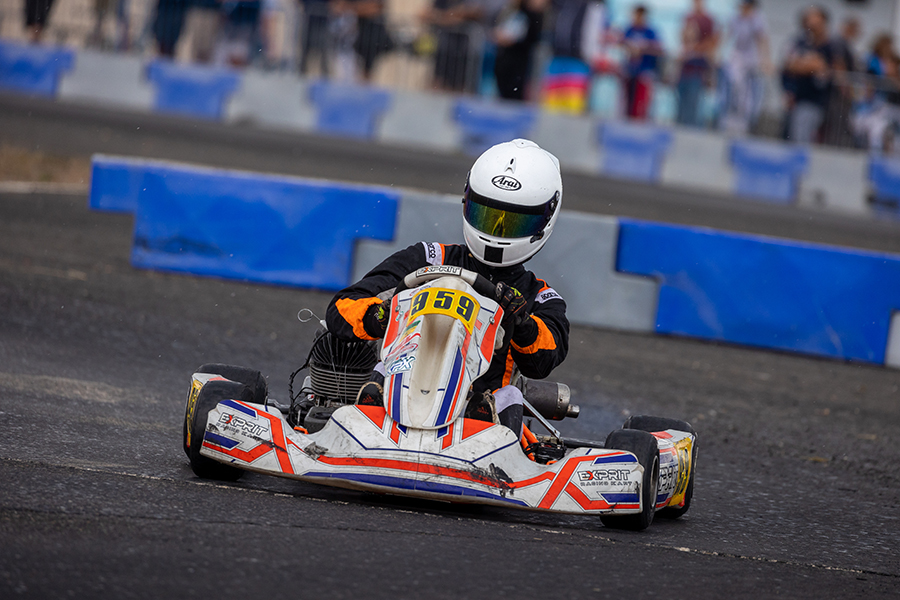 Aiden Kempf was able to outrun the KA100 Senior field in wet and dry conditions for the victory (Photo: Spencer Russell - PhotosBySMR)

The Superkarts! USA California ProKart Challenge kicked off the second half of the season at the Santa Maria Karting Association facility last weekend. The Santa Maria, California facility hosted Round Four of the six-round championship program on the July 17-18 weekend, where coastal California weather greeted the competitors of the nine categories and a brief rain shower made things extra interesting for one category during the main events. The championships in each of the divisions are taking shape, with drivers picking up key victories toward their goal of winning a California ProKart Challenge championship.

One of the most exciting main events on the weekend was the Nash Motorsportz KA100 Senior class. Welcoming 29 drivers as the largest class on the weekend, competitors had to also battle a brief change in the weather conditions. Ethan Lampe began the event with fast time in qualifying, posting a 49.598-lap to edge out four other drivers by a mere four hundredths of a second. Among those was Logan Toke finishing in the second spot after the timed session. Lampe was out of the race on the opening circuit of the 14-lap Prefinal, allowing Toke to control much of the race. Aiden Kempf reached the line first at the end. However, a three-second penalty for contact dropped him to second, moving Toke to the pole position for the main event. As the green flag waved with all drivers on dry Evinco tires, rain suddenly covered the track. It made for some exciting opening laps before the track eventually dried up and lap times fell to standard pace. Out front, Kempf controlled the field in the wet and the dry, leading all 24 laps for the victory to become the fourth different winner in four rounds. Toke was able to fight back to second after slipping down the order early in the race. Hard charger was top qualifier Lampe, coming from 28th to third. Fast lap of the race went to Kyriakos Sioukas in fourth, with Round Two winner and championship leader Dante Yu finishing fifth. 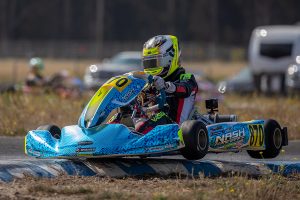 Jesus Vasquez Jr. was one of five drivers to sweep the action in Santa Maria. Vasquez added another victory to his 2021 season in the West Coast Motorsports KA100 Junior division. The double CalSpeed winner cleared the 18-driver field by nearly four tenths in qualifying before leading wire-to-wire in both the Prefinal and Final. Stephen Eisert recorded his best finish of the season with a runner-up performance, just ahead of G3 Argyros – earning a fourth straight podium finish. Alexander Gonzalez also completed his highest result of the year in fourth, with Valentino Garbarino up seven spots to fifth.

Two drivers now split the four wins on the year in the Formula Works Mini Swift category, as Charlie Smith picked up his second straight victory in Santa Maria. Smith was quickest in qualifying by nearly two tenths before leading all 12 laps of the Prefinal. He was shuffled back to third at the start of the Final, with two-time winner William Rasmussen taking control. Smith drove his way back up to the lead by lap 11, and ran away with the win. Rasmussen settled for second ahead of Keagan Kaminski, who earned hard charger with his driving from 17th to third. Giuseppe Guidera improved nine spots to fourth, with Nico Sarphati up 13 to finish fifth. 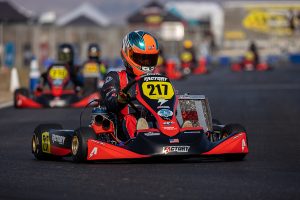 Billy Musgrave returned to the top of the podium in Pro Shifter (Photo: Spencer Russell – PhotosBySMR)

Seven-time series champion Billy Musgrave earned his third victory on the season with a sweep of the Positive Beverage Pro Shifter division. Musgrave led wire-to-wire in both the Prefinal and Final after setting fast lap in qualifying. The margin of victory was 20 seconds ahead of Jacob Yesnick, recording his third straight podium finish. Mathias Coito completed the podium in third, with championship leader Vicente Salas retiring after lap 10 to record his first DNF of the season. G3 Argyros picked up his second victory of the season in the Rolison Performance Group X30 Junior class, outrunning two-time winner Alex Mercado. Brett Revetta ran uncontested in the HRT Driver Development X30 Senior category.

The Mike Manning Karting X30 Master class welcomed a new winner on the season, the third different driver, with Terry Giffen earning the victory. Giffen started the weekend second in qualifying behind Ricardo Arruda. In the Prefinal, Arruda was unable to complete a lap, allowing Giffen to take over for the win. Giffen then led all 24 laps of the Final to secure his first victory of the season. Arruda drove up to second, with Robert Switzler joining them on the podium in third. 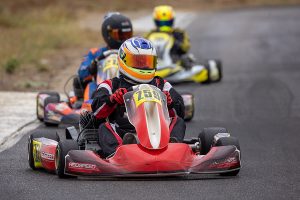 Three is also the number of winners now in the MDG Karting KA100 Master class. Two-time winner KC Cook set the pace for the first half of the event, posting quick time in qualifying and winning the Prefinal. Cook led the opening 18 laps of the 24-lap Final. That was when Brian Phillipsen saved the best for the end, working by Cook for the lead. Phillipsen would go on to score his first victory of the season, with Cook settling for second. Florida driver Phil Pignataro joined them on the podium in third in his first series start of the season.

A total of 14 drivers were in contention in the P1 Racing Engines Micro Swift category on the weekend. Sebastian Cortes set the mark in qualifying, edging out Ashton Woon by 14 thousandths. Troy Ferguson led the majority of the 12-lap Prefinal, only to receive a three-second penalty for a starting infraction. That promoted Woon to the pole position for the main event. By lap six, a familiar name was at the point with defending series champion and two-time winner Tristan Murphy up from the fourth spot. Murphy led the remainder of the 24-lap Final, earning a third straight victory on the season. Woon ended up second with Ferguson on the podium in third. Matthew Cagle was fourth with Bronson Koustas finishing fifth. 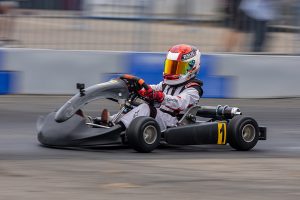 The California ProKart Challenge takes the month of August off with Superkarts! USA hosting the SKUSA Pro Tour SummerNationals on August 13-15 at the New Castle Motorsports Park in New Castle, Indiana. Round Five of the California PKC is scheduled for September 11-12 at the Willow Springs International Raceway in Rosamond, California.