Victories and Podiums for Rolison Performance Group at Road America 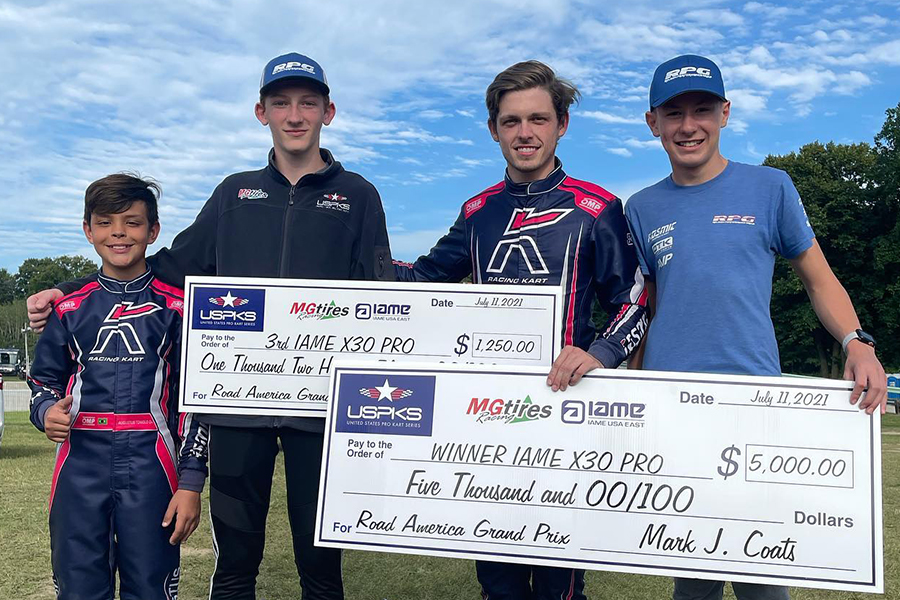 The second half of the season is underway with the Rolison Performance Group beginning a busy stretch of racing. The first stop took the OTK race team up to the ‘Cheese State’ for the United States Pro Kart Series event at the CTECH Manufacturing Motorplex at Road America. The Badger State Grand Prix hosted Rounds Five and Six of the 2021 championship program with RPG fielding drivers aboard the Kosmic brand in five of the seven IAME categories.

A solid roster of drivers competed in the X30 Pro division, led by four-time SKUSA Pro Tour champion Ryan Norberg. The Florida driver nearly swept the weekend, missing out on the perfect weekend by just 12 thousandths of a second in qualifying on Sunday. That was proceeded by a wire-to-wire effort on Saturday where Norberg was P1 throughout each session. It was his second victory on the season, winning by over one-second. After placing second in qualifying, Norberg was able to muscle his way to the win in the Sunday Prefinal and led all 22 laps for another 1.4-second margin of victory in the main event. Norberg took home a second straight weekend prize of $5,000. 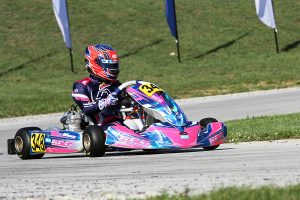 A weekend sweep in the main events for Ryan Norberg in X30 Pro, taking home the $5,000 payday for a second straight event (Photo: eKartingNews.com)

Former SKUSA Winter Series champion Nate Cicero had his best weekend performance in the X30 package with RPG. Cicero was able to record two fourth-place finishes, helping him to earn the $1,250 check for third-place overall on the weekend. Branyon Tiner, the current championship leader in the SKUSA Pro Tour, drove to top-10 finishes on the weekend. Tiner was seventh on Saturday and was among those in contention on Sunday, ending up fifth. A rough weekend for recent SKUSA Pro Tour winner Hannah Greenemeier in her first visit to Road America. Contact in the Prefinal dropped Greenemeier to the tail of the field, as she advanced up 16 spots to finish 12th. Sunday saw the contact come in the Final, where she ended up at the tail of the field but drove back to 23rd.

RPG Micro Swift driver Augustus Toniolo matched the win total of Norberg on the season with three. Coming off his double win weekend in May, Toniolo secured two podium finishes at Road America. Saturday saw Augustus fight forward after finishing fourth in the Prefinal to end up in the runner-up position, just missing out on the victory. Sunday’s main event was cut short due to a red flag, with Toniolo leading on the last completed lap and named the race winner for his third on the season. Fellow RPG Micro driver Jackson Gibson recorded his best weekend performance of 2021. Gibson drove up to fourth on Saturday to earn his best USPKS finish of the season. He came back and was in the hunt on Sunday, ending up fifth after the red flag. 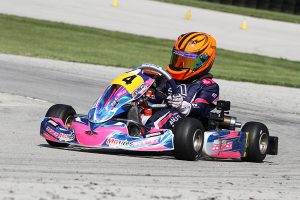 “I am really happy we were able to leave Road America with victories,” stated Mike Rolison of Rolison Performance Group. “The track is among the most difficult here in the United States, and our drivers were able to come to grips with the conditions and layout to stand on the podium. Alex and his AVP power were able to get our X30 Pro drivers to the front and our coaches helped guide our Micros to great performances.”

Four driver carried the RPG name in the X30 Masters division, including championship leader Mario Barrios. It was a challenging weekend for the point leader as a broken chain in the Prefinal on Saturday put him at the back of the field. He powered through in the Final to gain 11 spots and finished seventh. Sunday saw him up front, fighting for victory through the final lap of the main event. Contact pushed him out of the lead, and once restarted, was able to cross the line in fifth. Danny Robertson, John Robicheaux and Robert Maier all finished with a top-10 result. Robertson drove to fifth on Saturday while Robicheaux was sixth on Sunday, followed by Maier in 10th.

Chase Hand was able to keep himself in the title chase for the KA100 Junior championship. The Round Four winner earned two top-five results on the weekend. Saturday was a stellar drive forward from 10th on the grid in the Final to a third-place podium finish, including fast lap of the race. Hand was in the hunt all day Sunday, ending up winning the battle for fifth at the line. Graham Trammell had his best combined weekend performance with two top-10 results. On Saturday, Trammell improved four spots to 10th in the main event. He remained in the top-10 all day on Sunday, finishing ninth at the final checkered flag. 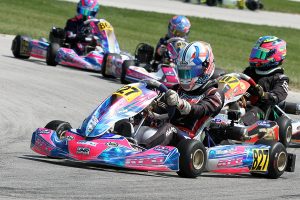 Chase Hand returned to the podium in KA100 Junior with a third-place performance on Saturday (Photo: eKartingNews.com)

It was an up and down weekend for the RPG contingent in the KA100 Senior class. SKUSA Pro Tour race winner Nolan Allison struggled early on Saturday but fought back in the final to gain six positions to earn an eighth-place finish. Contact Sunday in the Final cost him several positions to where Nolan drove back to 25th. Gia Cicero came just short of a top-15 finish on Saturday before contact took her out of the Final on Sunday. Contact also cost Grace Hemmerde solid results both days, recording a DNF on Saturday before driving to 37th on Sunday.

“Racing comes with its highs and lows,” added Rolison. “We are able to take certain situations and learn from them to move forward in our driver development from Masters to Micro. Our drivers have positioned themselves to be in the championship hunt in four classes as we look forward to fighting for the titles in October. Until then, we will continue to work hard on and off the track to get better and improve.”

A busy stretch of racing is ahead for the Rolison Performance Group operation. First is a race at the home circuit of Pat’s Acres Racing Complex in Canby, Oregon for the California ROK Championship double-header weekend on July 23-25. RPG then travels cross country to the GoPro Motorplex in Mooresville, North Carolina for the inaugural IAME USA Grand National Championship on July 29-August 1. Following that is the preparation for the Superkarts! USA Pro Tour SummerNationals as the championships for the 2021 season will be decided at the New Castle Motorsports Park in New Castle, Indiana.