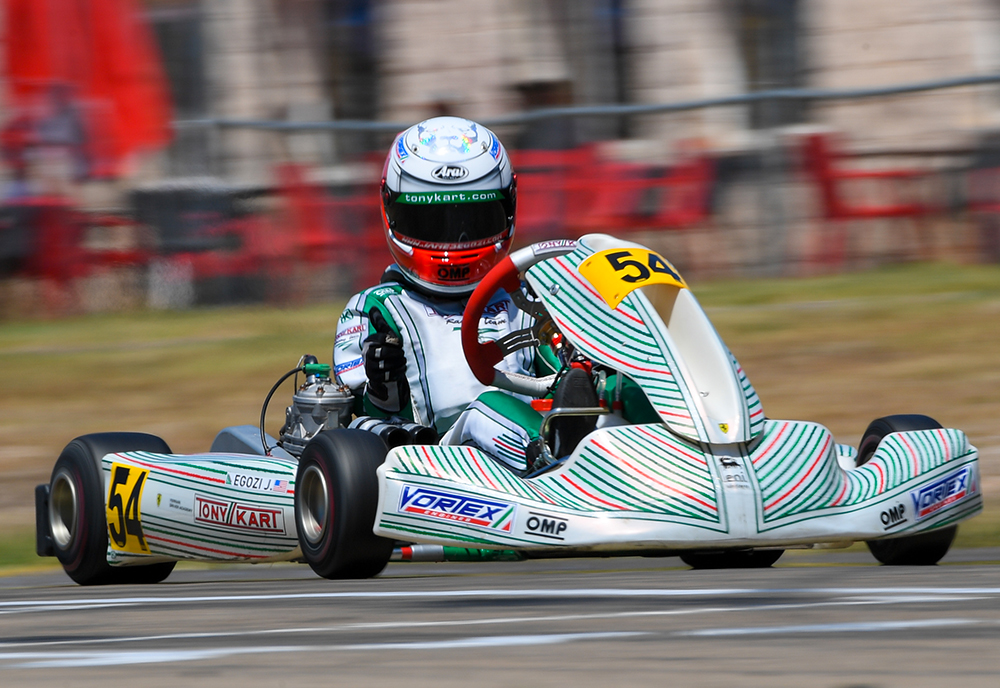 On the occasion of the second round of the Champions of the Future, our Racing Team finishes under the chequered flag of OKJ class in second position with James Egozi.

Good results for our Tony Kart Racing Team in the second round of the Champions of the Future in Zuera, an important test in view of the next round of the FIA Karting European Championship. On the Spanish track, our Tony Kart Racer 401R chassis, as usual combined with the Vortex engines (the DST for OK and the DJT for OKJ class), shows very good potentials.

With a pole position gained in the qualifying sessions and a seventh place in the final of Sarno the week before, James Egozi is once more the protagonist in the OKJ class at the weekend of Zuera. The American driver is constantly on the podium in the five qualifying heats – except for one in which, however, he reaches the Top 5 – and climbs in the general ranking up to third place. After a pre-final ended in the Top 6, Egozi is a few steps from the final win and climbs the ranking up to the second position: a certainly positive result in view of the last round of the European Championship.

Surprising debut in our Racing Team for Keanu Al Azhari. The driver from the United Arab Emirates stops in the pre-final and redeems the disappointing result with an impressive recovery from the bottom in the final: from 34th to 11th place, for a total of 23 positions gained. Previously Al Azhari signed a victory and two second places in the qualifying heats.

It’s a pity, instead, for Alexander Gubenko because his excellent recoveries in the qualifying heats (for a total of two second places, a third, a fourth and a sixth) and his fourth place at the end of the heats are broken by a disqualification in the pre-final due to track limits, followed by a withdrawal in the final. Harley Keeble and Jan Przyrowski also fail to finish the last race of the weekend: the British driver win twice in the qualifying heats, while the Polish driver finds a few obstacles in his path. Finally, Jimmy Helias prepares his commitment in the European Championship with a climb of 14 positions in the qualifying and eliminatory heats, although this is not enough to get the pass for the final.

In OK class, Joseph Turney is our best representative in the final of the category. The British driver obtains the third best time in the qualifyings, going on still in the qualifying heats with two victories and a second place, but slides to sixth place in the pre-final. Turney raises the bar in the final, climbes two positions and crosses the finishing line close to the podium. Tuukka Taponen also performs well after an uphill weekend: the Finnish driver unfortunately retires in the qualifying heats and a penalty does not reward him in another heat, but despite this he is able to recover not less than 9 positions in the pre-final and 5 in the final, which translates into a Top 10.
Bruno Del Pino does not express his full potential in Zuera, thanks to two retirements in the qualifying heats which send him to the Second Chance Heat. The Spanish driver already has his eyes on the next commitment of the Spanish circuit.

Our Tony Kart Racing Team’s men stay in Zuera: in fact, from July 22nd to 25th , the fourth and last round of the FIA Karting European Championship, reserved to the OK and OKJ classes, will take place.