Parolin: Orlov on the Podium in Spain 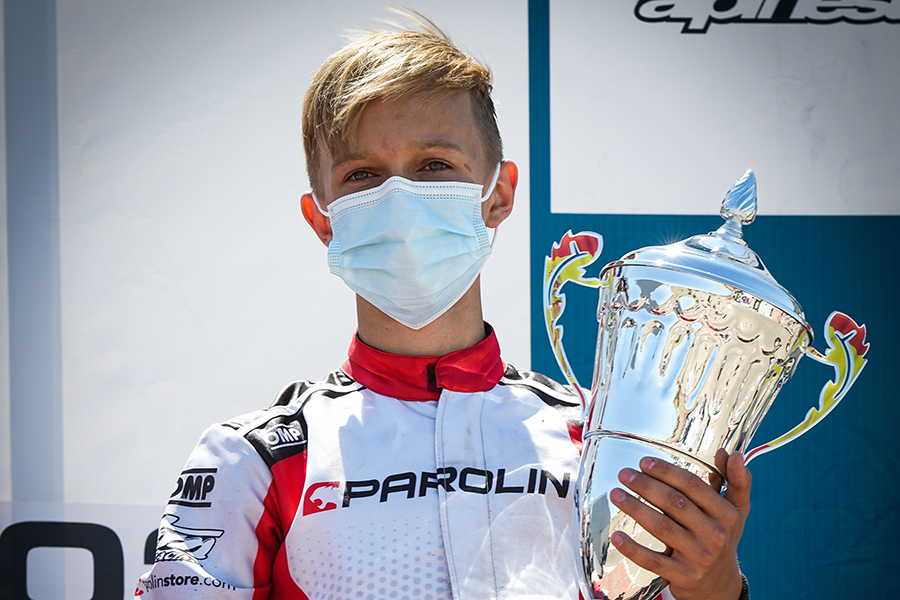 After the superb performance of Anatoly Khavalkin last week in Sarno, another Parolin Motorsport driver caused a sensation in OK-Junior this weekend in Zuera as Maksim Orlov brilliantly finished 3rd in the Champions of the Future series. Rashid Al Dhaheri also performed well, finishing 8th in the Final race, while Alfio Spina was fighting for the top 10 in OK despite a difficult weekend. This eventful weekend confirmed the ability of the Parolin / TM Racing karts in both categories with a week to go before the conclusion of the European Championship at this same circuit.

“We are very pleased with Maksim Orlov’s result”, said Marco Parolin. “He has been making great moves for a few races now without being able to put them into practice. This weekend everything went well for him and he was able to exploit the potential of his machine until the end. An international podium finish is an important moment for any driver. Rashid Al Dhaheri was also consistent in a very competitive environment and we are delighted that he was able to finish in 8th place. Alfio Spina was well on his way to a good run and he deserved to be fighting at the front in the Final stages. We are confident in our potential and we are ready to face the end of the European Championship next weekend positively.”

Maksim Orlov put in a string of top performances throughout the meeting. 19th in Qualifying, he progressed to the top 10 in the heats and continued with a comeback to 3rd position in the Prefinal. He then confirmed this by consistently fighting his way into the top three in the Final. His presence on the podium was a fitting reward for his efforts and talent.

Rashid Al Dhaheri’s Final result only partially reflects the energy he spent to get there. He had gone some way in the heats to make up seven places, but his nine-place climb in the Prefinal was crucial. He continued to fight valiantly in the Final to finish 8th. Anatoly Khavalkin had started too far back to make up for his two retirements in the heats. His 21-place recovery during the Repechage proved his great speed.

The Chilean driver Nicolas Ambiado was able to regain 28 places with a good consistency during the heats, but it was not enough to open up access to the Final phases. His other team-mates did not often experience the conditions required to allow them to overtake their delay in Qualifying.

Strong potential for Spina in OK

Alfio Spina has strong competitiveness in OK and he proves it in every race. 9th in Qualifying meant he had the necessity of maintaining the pace without a costly retirement in a three heat format. He nevertheless managed a good Prefinal at the edge of the top 10 with a progression of eight places before having to be satisfied with 16th in the Final. Brando Badoer had more difficulties in the battles before finishing 20th. James Wharton had made up eight places in the Qualifying Heats, but his retirement from the Prefinal after making up 10 places halfway through the race did not work in his favour.