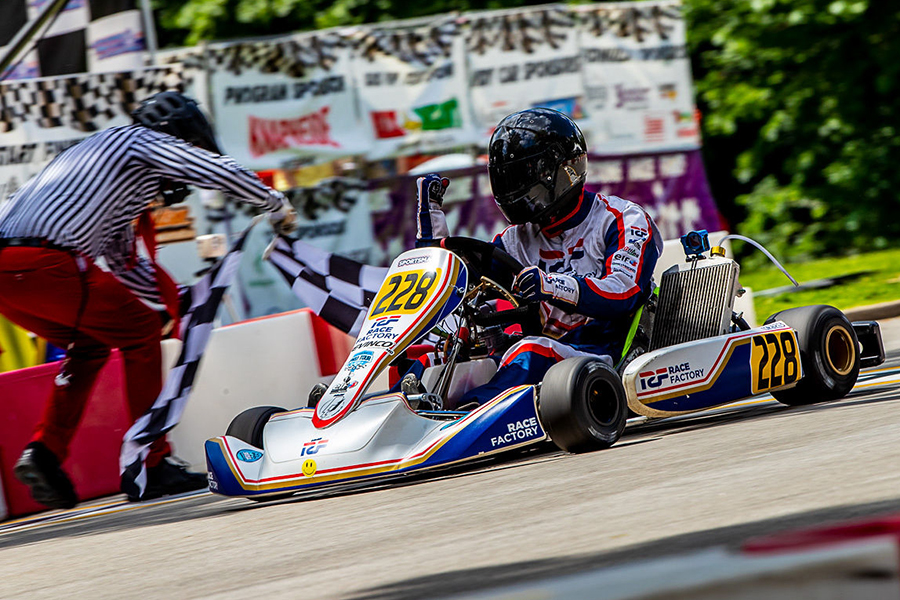 Kart tracks here in the United States and around the world are similar. They range from 1/2-mile to just over the 1-mile mark all within similar widths that include ample run off room with grass or dirt. Street racing is another element that puts drivers and equipment to the test. For the driver, street racing forces you to exert more mental awareness and attention to your surroundings. Complete focus is a must to keep it fast, and off the walls. For the kart, most streets or temporary circuits are not smooth and require each and every component to perform at its best.

When you talk about street racing or temporary circuits, there is no other like that of the Quincy Grand Prix. Elevation change, permanent brick walls, a creek that runs alongside the track, and of course amazing corners and fans watch every lap of the action all weekend long. The Quincy Grand Prix has a strong foundation dating back to 1970, with many of the legends in the sport competing around the South Park streets. The event ended after 2001, but brought back in 2018 by 27-time winner Terry Traeder – the son of the Quincy Grand Prix founder Gus Traeder. The city of Quincy, Illinois and the surrounding area have welcomed back the event with open arms, along with the many karters that competed that year along with 2019. COVID-19 shut down the event in 2020, with Traeder and Quincy bringing it back for 2021 with an even larger turnout then the two previous years. 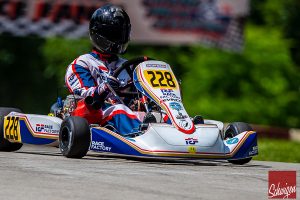 One of the draws of the Quincy Grand Prix is the shifterkart categories. This year’s event featured a Pro Open Shifter and a Pro Open 125 division along with a Saturday Sprint for the shifterkarts. The driver to win all both main events and the sprint race was Harden Motorsports Group driver Devon Smith-Harden.

Saturday Sprint was a duel during the first half of the race between Smith-Harden and 2019 Rock Island Grand Prix King of the Streets winner Race Liberante. The two went back and forth until an issue for Liberante put him on the sideline. That allowed Smith-Harden to earn his first Saturday Sprint at Quincy Grand Prix.

The following day was the main event for both shifterkart categories. First up was the Pro Shifter 125 with Liberante on the pole position and Smith-Harden alongside. A slight bobble off the line dropped him back to third at the drop of the green flag. After a few laps, Smith-Harden was back into the second spot. Liberante had a solid lead, until a mechanical issue put him on the sideline. That gave the top spot over Devon on lap 8, and from there went on to the checkered flag for his second career Gussie trophy, first on the weekend.

Next up was the Shifter Open main event with Liberante scheduled for the pole position and Smith-Harden on the outside of row one. Liberante would pull off the track during the warm-up lap with an issue, thus leaving Smith-Harden alone at the front of the grid. A direct line to the opening corner, Smith-Harden took the holeshot and made the race his. The only driver under the 1-minute mark in the Final, Devon took the 12-lap victory by a 14-second advantage, earning his second Gussie trophy on the weekend. Smith-Harden set a new track record for the circuit, a 59.786-lap on the weekend.

The Indiana native, now aboard the Race Factory chassis, has a host of races ahead of him on the schedule. The Stars Championship Series returns to the Motorsports Country Club of Cincinnati on the July 23-25 weekend where Devon is sitting fourth in the championship for the KZ Stars division after two rounds. Street racing will continue in 2021 with a possible visit to the Commercial Point Karting Classis on August 6-8.

The following weekend will be a unique venture. Harden Motorsports Group is attempting to compete at both the Superkarts! USA Pro Tour SummerNationals at New Castle Motorsports Park, along with the Elkhart Riverwalk Grand Prix – about 2 hours north. The street race competes under the lights and should provide enough time for Smith-Harden and a few others to travel up to Elkhart, Indiana on Friday and Saturday night. Smith-Harden is sixth in the SKUSA Pro Tour standings for Pro Shifter, nearly pulling off his first podium in the category at the SpringNationals in Utah. The summer season then ends with the Rock Island Grand Prix on Labor Day weekend, where Smith-Harden will battle for this year’s King of the Streets title. 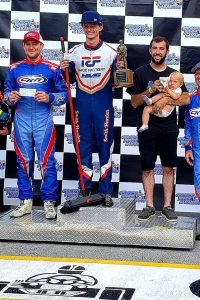 A sweep of the main events and Saturday Sprint for Devon Smith-Harden at the Quincy Grand Prix (Photo: Harden Motorsports Group)

Chassis: Race Factory
Engine/Engine Builder: Darren Harden/BCRE
Sponsors: Harden Motorsports Group, Race Factory, BCRE
Series You Compete In: SKUSA, Stars Championship Series, USAC Karting, any street race, currently dabbling in some dirt oval series
Years Karting: 14
How did you get started in karting? I started with a dirt oval kart at the Columbus Fair grounds when I turned 7. We then discovered a local street racing series. Ever since that first race I’ve been hooked and have grown to love this sport through and through.
What has been the high point in your racing career? I don’t think I can point out any one point in my career as a high point. I’ve been fortunate enough to have a lot of success in my career as well as have a fantastic support system throughout my career. That being said, whenever I can pass my knowledge forward to another up-and-coming driver to help them become more successful, I take that as the high points in my career.
What are your goals in racing? In a driving sense, my goal is to, one day, become a national champion in the shifter category in the next few years.
In a few words, how would you describe your driving style? Fearless
Funniest moment at the race track? My complete inability to give speeches at Rock Island Grand Prix

What do you do when not at the track? Work in the HMG HQ
What are your goals outside of karting? Graduate College would be my most immediate goal
What type of street car do you drive? 05 Subaru outback with an STI engine
What type of street car would you like to drive? 1969 Camaro
What are your pet peeves or things that irritate you? Disorganization or inconsistency
What do you think could be done to improve the sport of karting? I think if national-level karting could become as big of a spectator event as Quincy or Rock Island, karting would be a lot better off.
What are your favorite aspects about the sport of karting? I enjoy seeing competitors come together at the end of the day after a ruthless day of racing. The sportsmanship in karting is unlike any other type of motorsports.