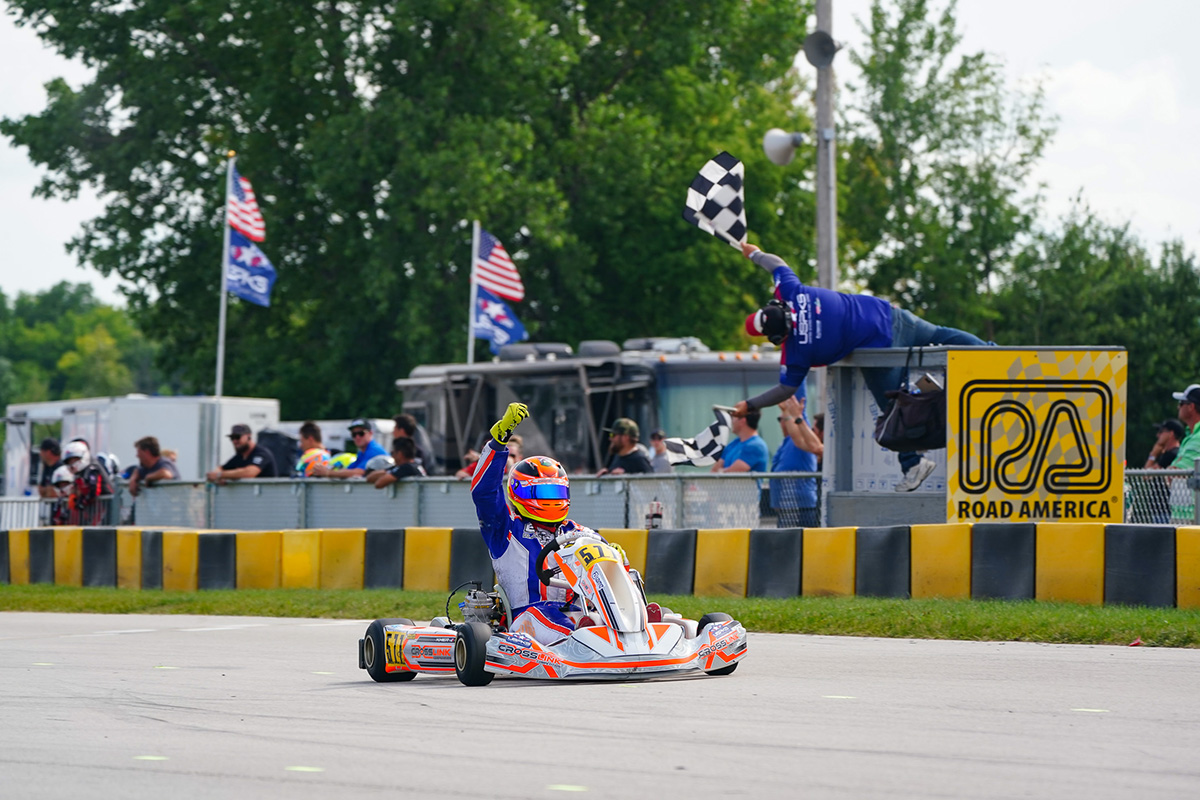 In back-to-back-to-back-back weekends that will see Team Crosslink go from cars to karts and back to cars again, this was the second weekend in a three-week fury of races. Traveling to the CTech Manufacturing Motorplex just inside the picturesque Road America, the Texas based program was once again on their game and at the pointy end of the field in multiple United States Pro Kart Series (USPKS) classes.

Saturday proved to be a day of top-ten results for the Texas based program as they garnered five results inside the top-eight with three of them coming from the X30 Masters class. Derek Wang led the way, narrowly missing the podium result to score a solid fourth place result as Martin Stone overcame a poor qualifying effort, that saw him outside the top-ten, to drive forward and earn a sixth-place finish when the final checkered flag flew. Miguel Mier was consistently in the top-ten and ended his day in P8.

Aden Rudolph qualified his Team Crosslink entry on the outside of the front row in the KA100 Junior class and finished fourth in the prefinal. A sixth-place result in the main event turned into eighth after a post-race penalty, but the speed was there for the now Texas resident to be on the podium. Brayden Robertson battled hard in the top-ten and eventually was classified in the eleventh position when the final checkered flag flew.

In the Senior ranks, Reilly Cann saw action in the huge KA100 class and was able to score an 18th place result while Alex Stanfield continued to show his pace in the X30 ranks driving at the front of the X30 Pro field and eventually earning himself a fifth-place result.

Sunday would see another dominant performance for Team Crosslink in the X30 Masters class as Miguel Mier and Derek Wang scored a one – two finish. Progressing throughout the day after qualifying fourth and fifth, Mier and Wang moved forward and managed to sweep the top two positions on the X30 Masters podium. Martin Stone, who was continually in the top-eight, found himself in a little trouble during the main event finishing 15th.

Rudolph returned to the top-ten in the forty plus kart strong KA100 Junior field adding a sixth-place result to his weekend tally, improving from his eighth-place effort earlier in the day. Reilly Cann gained ten positions in the KA100 Senior prefinal to be named the biggest mover and finished tenth but fell three positions in the main event to have a decent weekend ending with a 13th place result.

“We are back to car racing next weekend,” explained Sean Owens. “It was a great weekend for our karting efforts, but we have no time to celebrate as we are off to the Brainerd International Raceway with five drivers in our F4 and FR program. We need to keep the winning going!”