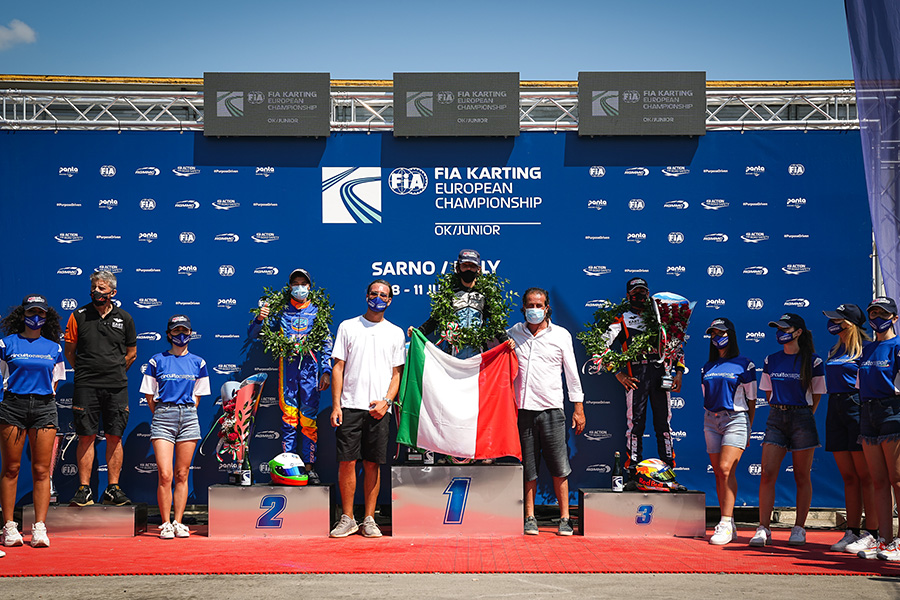 Following the many twists and turns that animated the qualifying phases of the third round of the FIA Karting European Championship – OK and Junior, surprises were expected in the two Finals. The result turned out to be more conservative than expected with the undisputed victory of Italy’s Andrea Kimi Antonelli in OK and the almost winning comeback of Britain’s Freddie Slater in Junior two thousandths behind his compatriot Harley Keeble.

The final qualifying heats on Sunday morning had set the tone in the persistent but not overwhelming heat of Sarno. Many non-serious incidents had punctuated the hard-fought races without upsetting the hierarchy. Several contenders for the title had recovered their competitiveness after a slightly slower start. The stage was set for the long-awaited final act at the foot of Vesuvius. The MG Tyres fulfilled their role with great efficiency until the end despite the temperatures often exceeding 30°. 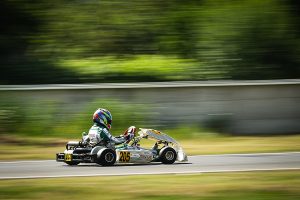 Khavalkin kept the lead at the start of the Final, but Alex Powell (JAM – KR/IAME/MG) took over from him on the fifth lap before Ferreira took the lead for good. However, the race was far from over as Freddie Slater (GBR – Kosmic/Vortex/MG) came back from 12th position on the grid like a cannonball. At the halfway point, Slater was nearly seven tenths off the leader and was closing in on Keeble. Slater achieved his goal and took control of the feature on lap 14. Keeble followed the pace at less than three tenths and stayed on the hunt until the end. As Slater began to savour the victory as he approached the finish line, Keeble took advantage of the opportunity to overtake him in the final metres and win the race by two thousandths of a second for the Tony Kart Racing Team. Ferreira accompanied them on the podium, while Khavalkin had to settle for fourth place. Yevan David (LKA – Exprit/TM Racing/MG) was the first Sri Lankan driver to finish in a European top five, ahead of Powell and Egozi.

Slater had nevertheless recovered well and remained at the top of the provisional Championship standings ahead of Ferreira. Powell moved up to third ahead of Keeble, while Ashkay Bohra (SGP – KR/IAME/MG) in 27th dropped to 7th and Kirill Kutskov (RUS – KR/IAME/MG) to 8th after retiring.

Provisional FIA Karting European Championship – Junior standings after the third round in Sarno: 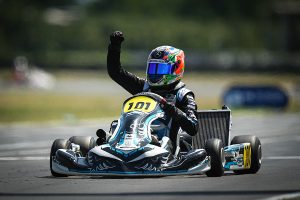 Slightly disappointed with his result at the first round in Genk, Andrea Kimi Antonelli (ITA – KR/IAME/MG) has been making up for it in the FIA Karting European Championship – OK since then. He started by adding a very conclusive victory to his score in the last Qualifying Heat, which allowed him to follow the two drivers in the spotlight this weekend, Nikola Tsolov (BGR – KR/IAME/MG) and Artem Severiukhin (RUS – Tony Kart/Vortex/MG).

Arvid Lindblad (GBR – KR/IAME/MG) was incisive at the beginning of the race behind Tsolov. Then the Antonelli machine came into action and made its way back to the top of the ranking. He took second place and then chased Tsolov down to win the race for KR Motorsport by more than a second. Lindblad secured an important third place for the Championship. Severiukhin finished fourth before being disqualified for mechanical assistance on the pre-grid and it was Evan Giltaire (FRA – KR/IAME/MG) who took fourth ahead of Norton Andreasson (SWE – Tony Kart/Vortex/MG).

After an unconvincing weekend that ended with a retirement, Rafael Camara (BRA – KR/IAME/MG) lost the lead in the provisional standings to Antonelli ahead of Lindblad. Tsolov moved up to fourth ahead of Severiukhin.

Provisional FIA Karting European Championship – OK standings after the third round in Sarno:

The fourth and final round of the FIA Karting European Karting Championships – OK and Junior will take place from 22th to 25th July in Spain on the Zuera circuit.

Results from the Sarno event are available on the official FIA Karting Championship app for mobile devices and on the website.

The lone driver from the USA in the OK division is 2020 European Junior champion Ugo Ugochukwu (KR Motorsport). Ugo fought back after a difficult qualifying session that put him 17th overall. Three top-five finishes in his four heat races helped to elevate him to 10th in the points and outside row 5 for the Final. Ugo drove up to the fifth position by the end of the 18-lap event, but a pushback bumper penalty dropped him to eighth overall. That lands him sixth in the championship standings, 49 points out of first.

Six drivers were on the entry list for the weekend in OK Junior, with only four taking to the track. Of the four, three went to the Final. The weekend began with USA driver James Egozi (Tony Kart Racing Team) setting fast time in qualifying over the 86-driver field. Winning three of the first heat races before placing sixth and second in his final two. That landed him on the outside of row one for the Final. Unfortunately, Egozi went backwards in the 17-lap race, ending up seventh. One spot ahead of him at the checkered flag was Jamaican Alex Powell (KR Motorsport). Powell was top-six in all five heats, including two wins to line up fourth for the Final. He was able to move up to second early on until he was shuffled back to sixth by the end. As stated above, Powell is third in the standings while Egozi sits sixth. Riding off a podium at the WSK event at Sarno, Kai Sorensen (Forza Racing) was hoping for the same for the FIA weekend. Sorensen was P9 after qualifying, but was up and down in the heats. A worst finish of 14 was coupled with a win in his final heat, placing Sorensen 14th for the main event. Contact in the opening laps of the Final dropped him down the order, eventually driving to 21st. Caleb Gafrarar (Leclerc by Lennox Racing) put in his best qualifying in FIA competition with a 24th overall. Two strong heat races inside the top-10 was not enough, with finishes outside the top-20 in the other three to classify him 51st in points, missing out on the Final.