Second half of season kicks off at Road America

The United States Pro Kart Series presented by MG Tires is set to enter the second half of the 2021 season, setting another record mark with the third stop scheduled for this weekend (July 9-11). Rounds Five and Six are set for the CTECH Manufacturing Motorplex at Road America in Elkhart Lake, Wisconsin with nearly 250 pre-entries for the seven IAME categories. The 242 pre-entry will increase with expected walk-up registrations, making this the third straight event with over 250 entries on the 2021 season. 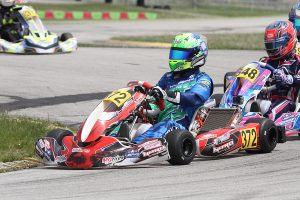 Connor Zilisch leads the X30 Pro and KA100 Senior championship heading into the second half of season (Photo: EKN)

The CTECH Manufacturing Motorplex at Road America was originally constructed in 2000, located outside turn 8 of the famed 4-mile road course. The facility can host multiple configurations on the hillside location, with the 8/10-mile ‘A’ layout as the national circuit for the USPKS weekend. Route 66 Sprint Series has visited the facility four straight years since 2018, with USPKS making its first trip on Labor Day weekend in 2020.

eKartingNews.com is proud to be providing the ninth season of Trackside Live program with United States Pro Kart Series. Tim Koyen will be calling the action all weekend from Road America. Those unable to attend can listen in to the live broadcast – presented this weekend by Acceleration Kart Racing, Alan Rudolph Racing Academy and KartSport North America. Bookmark www.ekartingnews.com/live and follow the EKN social media channels for more throughout the weekend in Wisconsin.

The X30 Pro division remains the headline Senior category, with over 30 drivers expected to be competing for the nearly $9,000 cash purse for the top-three drivers over the two main events. Also on the minds for a few are the championship hopes with the second half ahead. Two-time race winner Connor Zilisch (Nitro Kart / Redspeed) holds a slim 22-point advantage over Round Three winner Ryan Norberg (RPG / Kosmic). Four-time defending champion Brandon Jarsocrak (MDR / Kosmic) is third, 200 points out and needing to jump on the winning wagon for a chance at five straight. Alessandro de Tullio (Parolin USA) and Round One victor Arias Deukmedjian (KSNA / Kart Republic) round out the top-five in the championship chase, with a host of others vying to join the win list for 2021. 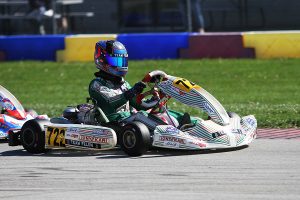 Jeremy Fletcher has led the X30 Junior standings since Round One (Photo: EKN)

The KA100 Senior division holds the stature of the largest category on the weekend with 49 drivers on the pre-entry list. USPKS has already stated via their weekend schedule the class will hold two separate Prefinals and a Last Chance Qualifier due to the size of the class. It is the same at the top of the standings as X30 Pro with Connor Zilisch (Nitro Kart / Redspeed) holding the advantage. His two wins in the first four rounds have him leading by 140 points over defending series champion Brandon Lemke (FMS / Merlin). AJ Myers (Magik Kart USA) has been consistent over the four rounds, sitting third with Hayden Jones (Nitro Kart / Redspeed) fourth and Nolan Allison (RPG / Kosmic) fifth. Zilisch was a winner at the Route 66 event two weekends ago, hoping to extend his championship lead.

The top-five in the X30 Pro Junior standings enter Road America within 100 points, including three of the four different winners on the season. Jeremy Fletcher (TF / Tony Kart) started the year out with a victory in Ocala, and remains the point leader. Round Two winner Paul Bocuse (SCR / Redspeed) is only five points out. Max Garcia (MPG / WPK) and Christian Miles (MDR / Kosmic) have not won yet on the year but are third and fourth in the standings with Round Three winner Ayden Ingratta (SCR / Redspeed) there in fifth, 94 points out of first. Round Four winner Caleb Gafrarar (PSL / Birel ART) is racing in Europe and thus will not be in Wisconsin. Entry total should eclipse the 30-driver mark with walkups, as they fight for a near $5,000 purse. 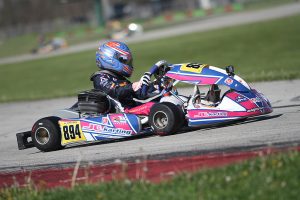 Sebastian Wheldon is at the top of the title chase in KA100 Junior (Photo: EKN)

While Jeremy Fletcher (TF / Tony Kart) has two wins in the KA100 Junior division on the year yet he trails Round Three victor Sebastian Wheldon (JC / Kosmic) in the standings. The two Florida drivers are separated by 89 points. Fletcher does have a win to his credit at Road America, winning at the Route 66 Sprint Series weekend along with Austin Jurs. Chase Hand (RPG / Kosmic) is the third different winner in the first four rounds, looking to cut down the 119-point gap to Wheldon in the standings. Junior rookie Parker DeLong (RPM / Tony Kart) and Noah Baker (Supertune / Tony Kart) are still in the hunt, both needing wins to help their cause for the 2021 title chase.

It should be another competitive weekend in the X30 Masters division, despite just 19 pre-entries. All four winners on the year are set to battle at Road America with point leader Mario Barrios (RPG / Komsic), defending champion Scott Kopp (FMS / Exprit), Round Three victor Scott Roberts (SCR / Redspeed) and the latest new USPKS winner Renato Jader David (Orsolon / Tony Kart). Danny Robertson (RPG / Kosmic) has been solid, sitting third in the championship chase despite no win. Derek Wang (Crosslink / Exprit) is a confirmed walk-up entry, looking for his first career USPKS victory which could continue the streak of different winners each round. 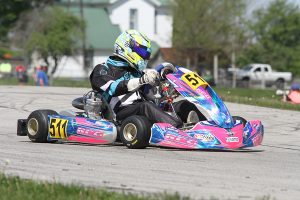 One of the top Cadet racers thus far in the 2021 season has been Enzo Vidmontiene (Benik), earning two victories in the four rounds of the Mini Swift class. Vidmontiene enters the weekend leading the championship standings by 79 points over Oliver Wheldon (JC / Kosmic), who has yet to win in 2021. Round Three victor Kai Johnson (AKT / Kart Republic) is third in the standings with Round Two winner Diego Ardiles (Supertune / Tony Kart) in fourth. Adding to the near 40 drivers in the class is SKUSA Winter Series champion Mathias Orjuela (Parolin USA), who has been racing in Europe since February, making a return to the USA for the first time since his trip across the pond.

The Micro Swift class continues to generate large numbers with nearly 40 in the field for Road America. Augustus Toniolo (RPG / Kosmic) swept the weekend at New Castle and holds the point lead by 35 points over Round Two winner Keelan Harvick (Nitro Kart). Both were at the Route 66 weekend with Harvick earning a victory. Ethan Tovo (Nitro Kart) is third with Alessandro Truchot (Parolin USA) fourth and opening round winner Issac Malcuit (AKT / Kart Republic) fifth. Local driver Brady Schad (Nitro Kart) could add his name to the list of winners on the 2021 season.

Be sure to follow the EKN social media network for updates, results, photos and videos from Road America for the United States Pro Kart Series Badger State Grand Prix.