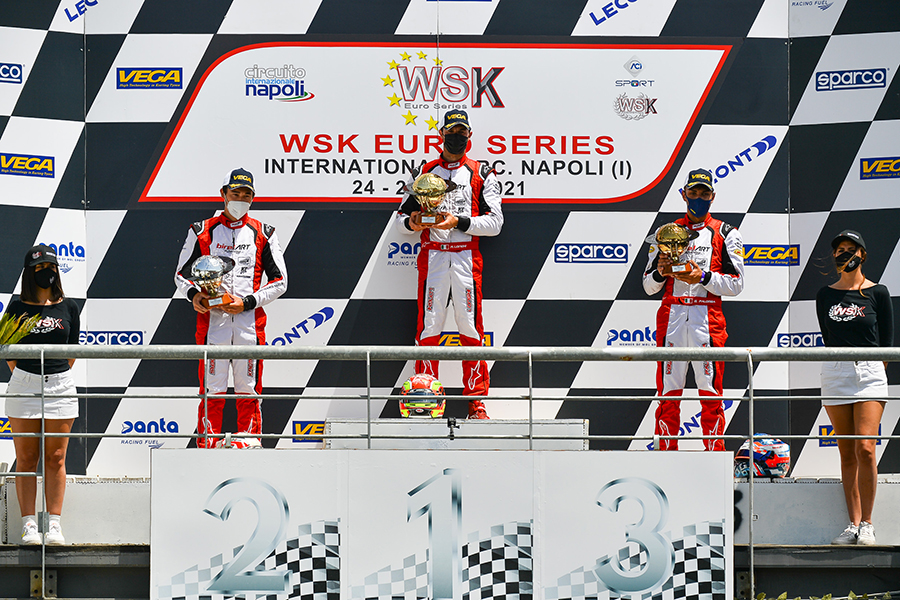 The round in Sarno has been the third and closing race of the WSK Euro Series in an intense, hard fought and red-hot weekend, both due to the torrid temperatures that characterized this round at the International Circuit Napoli but mostly because of the importance of the event that awarded the titles for categories KZ2, OK, OKJ and MINI.

A total of 227 drivers, out of the 250 entered from 50 nations, put on a great show. After the heats on Friday and Saturday, the closing day on Sunday, June 27th was dedicated to the Prefinals and Finals of each category that eventually named the winners of edition 2021. 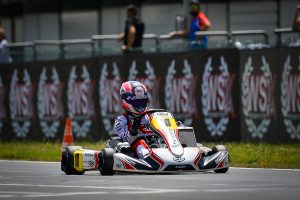 The British driver Arvid Lindblad (KR Motorsport/KR-Iame) won a fantastic final in OK which confirmed him on top of the championship and rewarded him with the title.

In OKJ the final was won by the Jamaican Alex Powell (KR Motorsport/KR-Iame), but the title went to the Brit Harley Keeble (Tony Kart Racing Team/Tony Kart-Vortex) thanks to the advantage he built in the previous two rounds in Lonato and Adria.

In MINI the victory of the final went to the Russian Vladimir Ivannikov (Drago Corse/EKS-TM Racing), while the title to the Spanish driver Christian Costoya (Parolin Motorsport/Parolin-TM Racing), who was second in the closing race.

Hiltbrand wins the final in Sarno as Longhi claims his second KZ2 title in a row.

Arvid Lindblad is the OK champion. 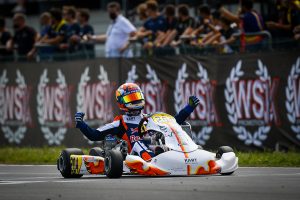 In OK, after the initial battle for the lead between the Bulgarian Nikola Tsolov (DPK Racing/KR-Iame) and the Italian Andrea Kimi Antonelli (KR Motorsport/KR-Iame), that came to the fore in the qualifying stages, the British driver Arvid Lindblad (KR Motorsport/KR-Iame) that was leading the championship took the lead of the final winning it with a good margin on Tsolov. In the duel for P3, the Brit Joseph William Turney (Tony Kart Racing Team/Tony Kart-Vortex) had the upper hand on Andrea Kimi Antonelli. Arvid Lindblad secured therefore the title with a good margin on his teammate from America Ugo Ugochukwu, who ended second in the championship thanks to the sixth place in the closing final. The Pole Tymoteusz Kucharczyk (Birel ART Racing/RK-TM Racing) ended third equal on points with Nikola Tsolov. 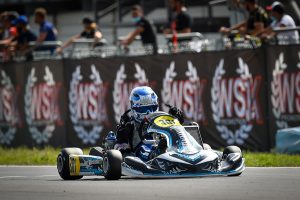 In OKJ the Jamaican Alex Powell (KR Motorsport/KR-Iame) won a very hard fought final that required two starts due to an incident at the first start. Powell won the final leading Ukraine’s Oleksandr Bondarev (Honta/Tony Kart-TM Racing) and the American Kai Sorensen (Forza Racing/Exprit-TM Racing), who completed a good recovery race. The Brit Coskun Irfan (KR Motorsport/KR-Iame) had to retire from the final after shining until the prefinal. The championship went to the Brit Harley Keeble (Tony Kart Racing Team/Tony Kart-Vortex), who was already leading the pack at the eve of this round but ended ninth from P4 due to a penalty. Despite this result, Keeble kept a 3 points margin on Powell. The third place in the championship went to Freddie Slater (Ricky Flynn/Kosmic-Vortex).

In MINI Ivannikov gets the win in the final, as Costoya wins the title. 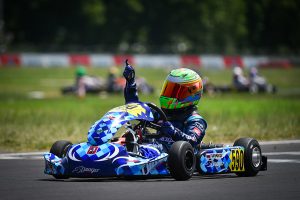 The Italian Emanuele Olivieri (Formula K Serafini/IPK-TM Racing) missed the appointment with the podium in MINI this time around as the classification leader leader had to retire from the Prefinal. In the final, the Russian Vladimir Ivannikov (Drago Corse/EKS/TM Racing) took the lead of the race from the Spaniard Christian Costoya (Parolin Motorsport/Parolin-TM Racing), who already came to the fore in the heats, but settled for P2 in the final as this result allowed him to get the 2021 title. The third place went to the Italian Jacopo Martinese (CMT/Parolin-TM Racing), who won Prefinal-B. Costoya ended the championship on top at 250 points, while the second place went to Ivannikov, while Olivieri got the satisfaction of the third step of the podium. 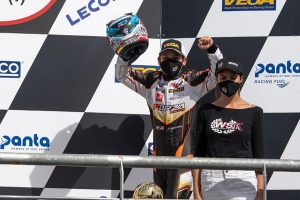 Kai Sorensen on the podium in OKJ

This weekend saw the most North American drivers competing in Europe for 2021 with 16 drivers in Sarno. The Mini division had eight in total with four of them making the main event. The top finisher was Matias Orjuela (COL) as the Parolin Motorsport driver has spend much of the season in Europe after winning the SKUSA Winter Series championship this winter. He qualified 10th and ended up 8th after the heat races, holding that position through Prefinal B. Matias fell back to 11th at the start of the Final but drove his way up to the fourth position by the checkered flag. Top Canadian Jensen Burnett (Energy Corse) was among the top-10 contenders all weekend, winning one of his heat races. He slipped to P8 in Prefinal A, but grabbed two positions in the 8-lap Final to end up 13th. One spot behind him was 2020 SKUSA Pro Tour champion Jack Iliffe (Parolin Motorsport). Iliffe was 30th after the heat races with a best finish of fifth. He improved eight spots in Prefinal B to start Row 7 in the main event. Iliffe dropped to 24th at the start and fought back over the eight laps to return back to his P14 position. His brother Oscar Iliffe (Parolin Motorsport) was on the outside looking in after the heat races, sitting 40th. He improved four positions to earn a spot in the main event, starting 32nd. In the Final, Oscar continued to move forward and ended up 27th.

As noted above, Jamaican Alex Powell came away with victory in Sarno for the OKJ division. Powell won three of the five heat races to earn pole position for Prefinal B. He came away with the victory to start the Final on the front row and led wire-to-wire in the Final. It was his first win of the series, putting him just three points short of the championship. Joining him on the podium USA driver and SKUSA Winter Series X30 Junior champion Kai Sorensen (Forza Racing). Sorensen qualified 53rd overall and fought back through the five heat races to be classified 20th. He gained six spots in Prefinal B to start the final from Row Four. Sorensen jumped to sixth on the opening lap, and into fourth by Lap 10. With two laps remaining, Sorensen put himself into third, crossing the line with his first podium finish of the series. On his bumper at the finish line was fellow USA driver James Egozi (Tony Kart Racing Team). Egozi was second in qualifying and was top-three in all five heats, including one win to end up P4 in points. He fell back to third in Prefinal B to start the Final from Row Three. Egozi ran as high as third but crossed the line in fifth, moving up to fourth after a pushback bumper penalty. In the championship, Egozi was fourth in the title standings. Former Challenge of the Americas champion Enzo Deligny (FRA) was among the top-20 drivers all weekend long. He was 16th in qualifying and moved up to 13th in points after the heat races. Deligny held his P7 position in Prefinal A to start the Final from Row Seven. Enzo was shuffled back at the start and was unable to rebound, ending up P26 at the checkered flag.

Three drivers in OKJ did not make the Final with Caleb Gafrarar (Leclerc by Lennox Racing) and Logan Toke (Ward Racing) coming up short in the Prefinals with Xander Reed (KR Motorsport) missing the cut after the heat races.

USA driver Ugo Ugochukwu (KR Motorsport) fought forward throughout the weekend in OK. Ugo qualified 24th and drove to top-eight results in the heat races to be P15 in points. He improved four positions in Prefinal A to start the Final from Row Four. He improved up to sixth and fought strong to hold the position in the checkered flag. The result helped to place him second in the championship.