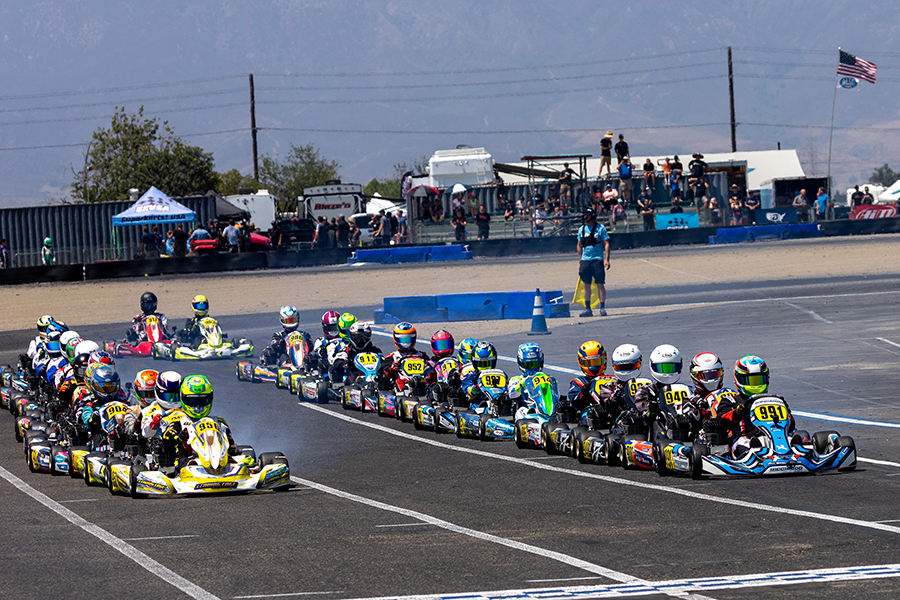 A full weekend of racing was conducted on June 18-20 as the California ProKart Challenge hosted a double-round event at the CalSpeed Karting facility. Rounds Two and Three of the 2021 Superkarts! USA regional program were conducted at the Fontana, California facility on Saturday and Sunday following a full day of practice on Friday, welcoming over 100 drivers. Four drivers were able to leave the weekend with two victories each in their respective categories.

Jesus Vasquez Jr. dominated the West Coast Motorsports KA100 Junior division both days, earning a perfect score each round. Vasquez cleared the 19-driver field in qualifying on Saturday before leading all laps of the Prefinal. Vasquez then led all 22 laps while posting quick time in the Final for a 13-second advantage toward victory. The fight was for second, with Logan Ainsworth earning the position over G3 Argyros. Christian Cameron and Dane Idelson completed the top-five. It was a duplicate performance on Sunday for Vasquez, never relinquishing the P1 position throughout the day with wire-to-wire wins in the Prefinal and Final. Argyros improved to second with Caden Chrisman in third. Idelson was fourth with Cameron rounding out the top-five. 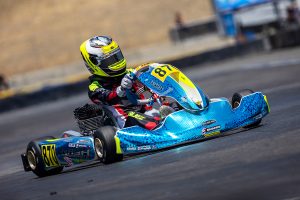 Defending P1 Racing Engines Micro Swift champion Tristan Murphy put himself on top of the podium both days for his first series victories of the season. Fresh off his first SKUSA Pro Tour victory at the SpringNationals, Murphy put in a sweep of the action on Saturday at CalSpeed, finishing P1 in each session and leading all laps of the Prefinal and Final. The margin of victory was 3.1 seconds in the main event ahead of Troy Ferguson, who recorded the fast lap of the race. Ashton Woon joined them on the podium with Matthew Cagle in fourth and Sebastian Cortes in fifth. Sunday was another sweep performance by Murphy, this time challenged by Woon and Ferguson. Woon nearly took the Prefinal win away from Murphy, but came up short. In the Final, Murphy led all 20 laps for his second victory on the weekend with Ferguson trailing. Woon ended up third with Cortes up to fourth and Nixon Ellsworth placing fifth.

The Mike Manning Karting X30 Master class was a hard-fought battle throughout the weekend with Branden Bell earning the victory both days. Terry Giffen set fast time in qualifying to begin Saturday’s action before Chris Carel came away with the Prefinal win. Bell put himself up to the lead early in the Final, but was pressured throughout the race by Carel. At the checkered, Bell held off Carel for his first victory of the season. Giffen completed the podium in third. Sunday began with Carel on top of the time sheet in qualifying, with Bell down in fourth. Bell advanced over the opening lap of the Prefinal to the front, leading the way to the race win. The Final was all Bell, going green-to-checkered in the 22-lap race for a second victory on the weekend. Carel was second at the line with Ricardo Arruda placing third. 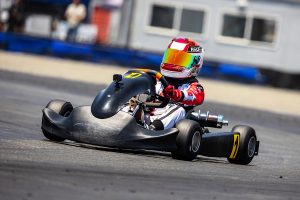 Tristan Murphy swept the action over the two rounds of racing in Micro Swift at CalSpeed (Photo: Spencer Russell – photosbysmr)

The largest category of the weekend was the Nash Motorsportz KA100 Senior class, matching the opening round weekend total of 33 drivers. Oliver Calvo opened up the weekend as the driver to beat with fast time in qualifying for Saturday’s action. Calvo led the opening eight laps of the Prefinal until Jacob Hoover took over the point and scored the win. An issue on the opening lap of the Final put Hoover on the sidelines. That shuffled up the field, with Calvo at the point and Dante Yu up from sixth to second. Yu took over the lead on lap 14 and showed the way until the checkered flag for his first win of the season. Calvo finished second, matching his result from the opening round with Buttonwillow winner Blake Nash in third. Cody Diggs drove to fourth with Ayden Aquino in fifth. Yu began Sunday’s round of racing on top of the results with fast time in qualifying, just a mere two thousandths of a second quicker than Aquino. Yu, Aquino and Calvo each took a turn at the point in the Prefinal until the final lap – when Dante scored the race win. It appeared to be a sweep of Yu, as he bolted away from the field and led all 22 laps of the Final. However, a three-second penalty to Dante for jumping the start took the win away, dropping him to third in the order. That promoted Hoover up to the P1 spot of the podium for his first series win, becoming the third different winner in three rounds. Nash posted fast time of the race and classified second. Calvo and Aquino completed the top-five. 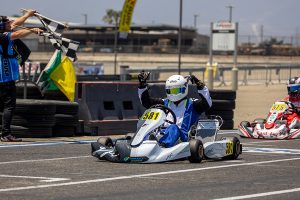 It was a great two-day battle in the MDG Karting KA100 Master class. Mike Smith set quick time in qualifying to begin Round Two, and led all 12 laps in the Prefinal for the win. Brett Harrelson recorded a DNF in the Prefinal, and started the Final from P10. Harrelson was quick into the top-five and worked his way forward to the lead by lap 16, taking the point away from Smith. From there, Harrelson held on to score the victory. Round One winner KC Cook was able to slip past Smith for second, with Tim Meyer fourth and Brian Phillipsen in fifth. Cook set the pace in Sunday’s qualifying session but fell to fourth in the Prefinal with Harrelson taking the win. Meyer put himself at the front of the field to begin the 22-lap Final, leading for the first time all weekend. That lasted only seven laps until Cook took back the top position. From there, Cook led the remainder of the race to earn his second victory of the season. Harrelson was second with Smith in third. Phillipsen pushed Meyer back to fifth by the end of the race.

William Rasmussen made it two in a row in the Formula Works Mini Swift category. Rasmussen started Round Two by qualifying fourth behind top qualifier Charlie Smith. It was Smith that crossed the line first in the Prefinal, but a three-second penalty for a jump start dropped him to third, handing Rasmussen the win. Smith returned to the front in the Final, as he and Rasmussen went back and forth throughout the 20-lap session. With three laps to go, Smith secured the top spot and reached the checkered flag first. He would, however, lose the victory with a three-second penalty for cutting the track. That promoted Rasmussen to the top spot of the podium, with Keagan Kaminski to second and Lucas Bruncati third. Smith was classified fourth, while Johnie Stamps completed the top-five. Sunday saw Rasmussen at the top of the time sheet after the qualifying session, with Smith off by only 71 thousandths. Smith would end up leading over half the Prefinal, going on to score the win before going wire-to-wire in the 20-lap Final for his first victory of 2021. Kaminski beat out Rasmussen, Cypress Andruss and Nico Sarphati for the runner-up position. 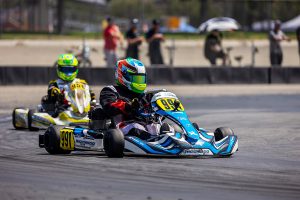 The Positive Beverage Pro Shifter division welcomed a first-time winner on the weekend. Seven-time series champion and Round One winner Billy Musgrave swept the action on Saturday, leading from qualifying to the final checkered flag. Musgrave, however, came in underweight at the end of the Final. That promoted Mathias Coito to the top of the podium for his first series victory in the category. Jacob Yesnick was classified second, with Vicente Salas in third. Musgrave returned to top of the order on Sunday with fast time in qualifying, but was outrun in the Prefinal by Yesnick. The Final would be all Musgrave, leading wire-to-wire in the 22-lap race for his second victory of the season. Salas improved to second with Yesnick finishing third.

Logan Chambers ran solo in the Empire Karts S5 Junior Stock Moto division to double up in the win column. Brett Revetta and Ryan Vincent each scored a sweep in the HRT Driver Development X30 Senior category over the two rounds on the weekend. G3 Argyros and Round One winner Alex Mercado each took home a victory in the Rolison Performance Group X30 Junior class. 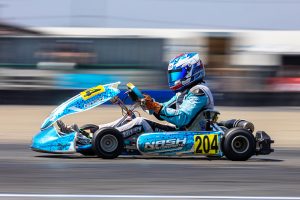 Brett Harrelson came from the tail of the field to win on Saturday in KA100 Master (Photo: Spencer Russell – photosbysmr)

The California ProKart Challenge begins the second half of the 2021 season with a trip to the Santa Maria Karting Association facility in Santa Maria, California on July 17-18. The two-day event will host Round Four of the 2021 championship chase. The SKUSA Pro Tour then concludes on August 13-15 as the 12th edition of the SummerNationals will be held at the New Castle Motorsports Park in New Castle, Indiana.