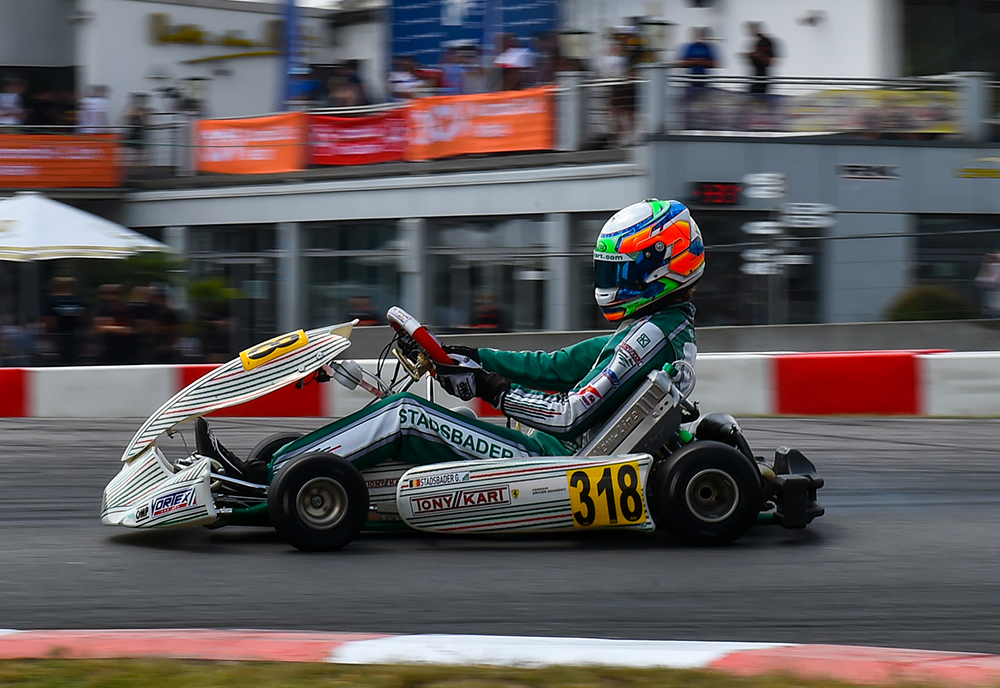 On the German circuit of Wackersdorf, our Racing Team attends the first round of the 2021 season of the FIA Karting European Championship with a team made up of 10 drivers for the two categories.

The FIA European commitment for the KZ and KZ2 gearbox classes, is beginning with the FIA Karting European Championship. At the starting grid, of course, the Tony Kart Racing Team boasts several victories and continental titles in its palmarès. Our drivers perform well in the first round in Wackersdorf, during a weekend featured by high temperatures, unusual for Germany at this time of year, with our Tony Kart Racer 401 R and Vortex engines.

In KZ, Noah Milell and Simo Puhakka can immediately show all the potential of our material running in the first positions of the general ranking, with the Swedish and the Finnish drivers respectively second and fourth in the qualifying session. Milell, at his second race as official driver of our Tony Kart Racing Team in this season, makes the most of his position during the three qualifying heats and for the final on Sunday afternoon he is still in the Top 3; Puhakka, on the other hand, is involved in several collisions with other drivers that penalize his performance, but with his experience and tenacity he remains in the first six positions at the end of the heats. In the decisive final, Puhakka manages at best the long run of the 26 laps and crosses the finish line in the Top 10, while Milell cannot take advantage of his good performance shown during the weekend and is also penalized by 5 seconds for the front fairing placed in the wrong position.
Unlucky is Lorenzo Camplese’s path in Germany: the Italian driver is the author of three comebacks in the qualifying heats – one of which of not less than 11 positions – and in the final he runs in the Top 15, until a collision with another competitor forces him to retire after just six laps.

The entry list of the KZ2 class is rich, with a total of 95 drivers. Jean Luyet is constantly among our best drivers during the three days of the German event and shines during the Sunday’s final: in fact, the Swiss driver starts well and climbs 4 positions. Then, during the race, he preserves himself with experience and cold blood from the attacks of his rivals who are chasing him to cross the finish line in seventh position. It didn’t go so well for Markus Kajak, in the final: the Estonian driver cannot avoid an accident involving several drivers in the first corners of the first lap and has to end the race prematurely.

Difficult weekend for our other drivers. Matteo Zanchi has all the right cards to reach the final, but in a qualifying heat on Saturday he is involved in an accident at the start which compromises his standing position. Samuel Luyet, Josef Knopp and Gilles Stadsbader grows steadily during the qualifying heats, but cannot repay their efforts by entering the final, as well as Kacper Nadolski. Surely, the experience gained will allow to gather better results in the next round of the FIA Karting European Championship in Adria, in August.

Now the Tony Kart Racing Team turns its attentions to the WSK Euro Series: from June 24th to 27th the last round of the 2021 season will take place at the Naples International Circuit, in Italy, valid for the KZ2, OK, OKJ and MINI classes.