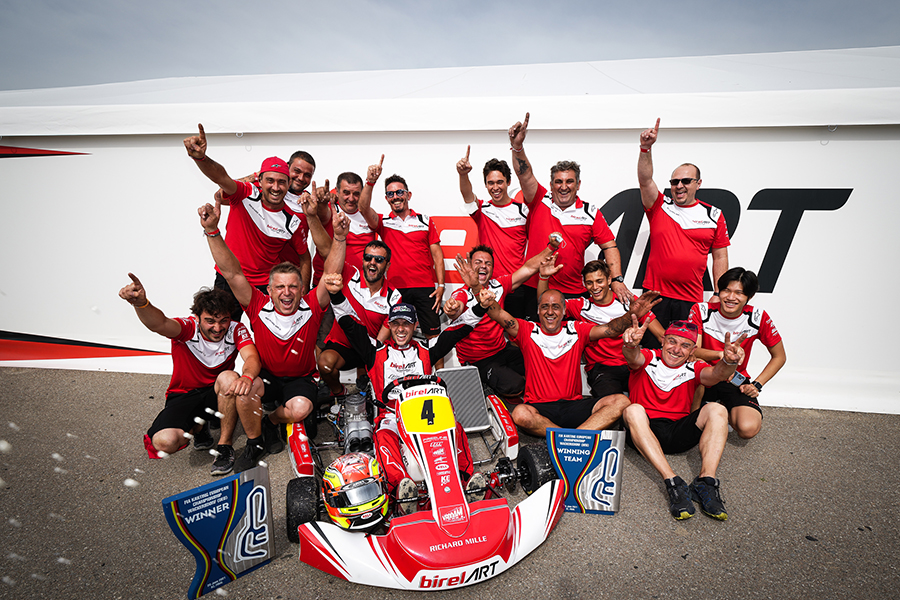 The Birel ART team started its new FIA Karting European campaign in the gearbox categories flawlessly. Galvanised by their quadruple win the previous week in the WSK Euro Series, the red army did not take long to return to the top step of the podium. Riccardo Longhi, driving an extremely competitive kart, won the KZ Final in Wackersdorf, Germany, leading from start to finish!

Throughout the meeting, Birel ART chassis were in the leading group of the field, both in the very competitive KZ category and in KZ2, thanks to the official team and to the other teams that chose the Italian brand to compete in this high level event. The Lissone factory showed that it had the intention to defend its European Championship title won in 2020 with the Dutchman Marijn Kremers. The latter was ready to fight again for the victory in Wackersdorf. 5th in Timed Qualifying and 4th in his first race, he was then involved in incidents that prevented him from defending his chances at the end of the meeting. On the other hand, his team-mate Riccardo Longhi was impressive over the three days.

“I am very proud of the performance of the Birel ART team,” said Riccardo. “It was the first time we used MG tyres in KZ and KZ2 in a competition of this level. We all worked hard to achieve the best possible performance with this package. Thanks to my 3rd fastest time and my performance in the Qualifying Heats, I was able to earn my place on the front row for the Final. I managed to get the best start and quickly secured a small lead. The performance of my Birel ART/TM Racing kart allowed me to keep this first place until the finish despite the pressure from my opponents. In Adria in August, the European Champion title will be my only objective!”

In KZ2, Giuseppe Palomba had a clear chance to reach the podium, as shown by his results in Qualifying: 5th in Timed Qualifying and after the heats following very encouraging results (2nd, 1st, 1st, 6th, 2nd), he unfortunately saw his Final stopped at the first corner due to a collision involving several karts.

Determined to complete the overall result of the Birel ART team, Alessio Piccini had to deal with some problems in the heats, but confirmed his speed in the Final. He made one of the best comebacks of the Final by gaining 19 places, going from 33rd to 14th.

There were 95 drivers entered in this category, but only 36 finalists. The Italian Moritz Ebner was very close to being one of them after a nice gain of 16 places during the heats, while Thanapongpan Sutumno still learned a lot during this difficult event.

In the KZ2 Final, the Birel ART chassis was the best represented, notably thanks to the Modena Kart ASD team (11th with Marco Tormen) and KSW led by Robert Kingervater, Valentino Fritsch and Alexander Schmitz.

The Birel ART factory would also like to congratulate the overall performance of the Leclerc by Lennox Racing team, which is using the Birel ART chassis brilliantly. In KZ, Pedro Hiltbrand reached 6th place just ahead of his team-mate Matteo Vigano, who came back at high speed from 14th position, while Viktor Gustavsson, European KZ2 Champion in 2020, scored his first points in his new category. In KZ2, Laurens Van Hoepen had the honour of taking the third step of the podium after a perfect meeting.