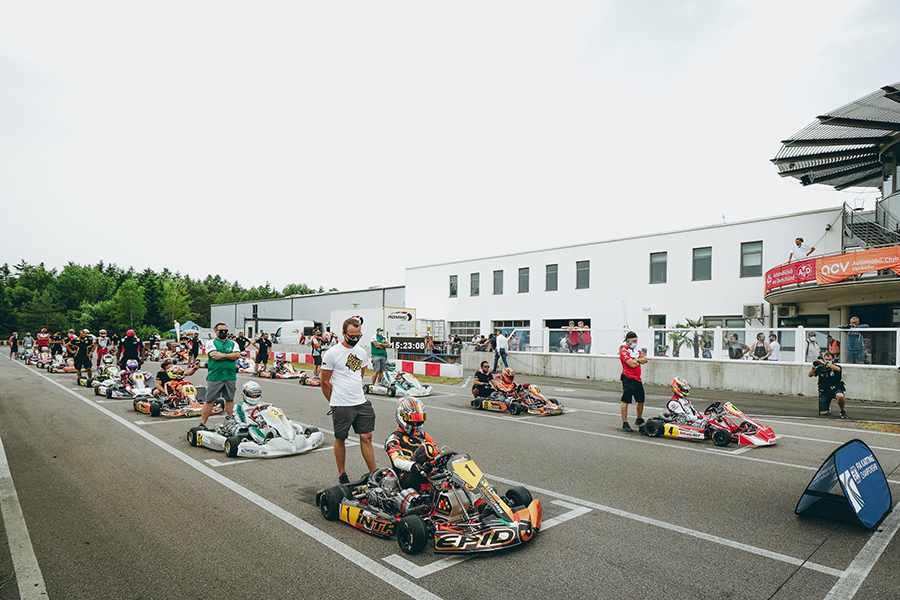 The FIA Karting event in Wackersdorf kept its promises right to the end. The final qualifying heats on Sunday morning had set the tone. The battles were lively in every race and the fight for victory was intense in all three categories. Senna van Walstijn (NLD) won the KZ2 final in style to round off his superb overall performance. Second until then, Reno Francot (NLD) won the FIA Karting Academy Trophy final. Finally, Riccardo Longhi (ITA) obtained a superb victory in the FIA Karting European Championship – KZ after holding off Emilien Denner (FRA).

The weather was not as hot as the day before, and the sky had become overcast. The conditions were clearly excellent for a spectacular and suspenseful competition. The tension was already perceptible during the closing qualifying heats and the incidents multiplied due to the impulsiveness of some participants. The German circuit confirmed its selectivity and enabled intense sporting confrontations.

Francot takes the lead in the Academy Trophy 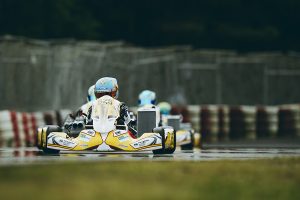 Yevan David (LKA), who had been a solid leader until then with two victories, retired on the first lap of the C-D heat on Sunday morning and the face of the FIA Karting Academy Trophy was turned upside down. Reno Francot (NLD) was able to take the lead in the final, but Salim Hanna (COL) led for five laps. The young Dutch driver managed to take over the lead halfway through the race and led the race to victory. Salim Hanna (COL) secured second place despite the return of Dion Gowda (SGP) from 9th on the grid to the third step of the podium. However, David showed his competitiveness by moving up seven places to fourth ahead of the surprising Darius Babaiona (ROU) who moved up 10 places.

Francot said: “I am very happy to participate in this competition where all the drivers use the same equipment. I was fast from the beginning of the weekend and everything went well. The start of the final was tricky as Salim attacked me on the 4th lap. I stayed focused so as not to make any mistakes and I overtook him before increasing my lead until the finish.”

Provisional standings of the 2021 FIA Karting Academy Trophy after the first round in Wackersdorf. 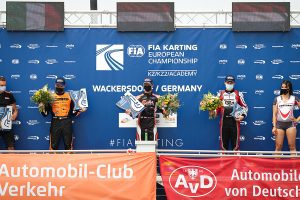 The young Senna van Walstijn (NLD – Sodi/TM Racing/MG) started by adding a fifth victory in his last qualifying heat on Sunday morning. A logical favourite for the final of this first round of the FIA Karting European Championship – KZ2, he was able to regain the advantage over Giacomo Pollini (ITA – CRG/TM Racing/MG) who had jumped out of the blocks at the start of the race. After four laps under the “slow” procedure to clear the track after a collective collision, the race resumed and van Walstijn had the field free to gradually distance his rivals. He crossed the finish line as winner with a new best time more than two seconds ahead of Pollini. Laurens van Hoepen (NLD – Birel ART/TM Racing/MG) took the third step on the podium, while Leonardo Marseglia (ITA – KR/Iame/MG) finished fourth and Paavo Tonteri (FIN – CRG/TM Racing/MG) fifth.

In the words of the winner: “I am very happy to have obtained my best result ever. The whole weekend was fantastic thanks to the work of the CPB Sport team who have been supporting me since last year. I was wary of Pollini and van Hoepen for the final, because I knew they were very fast. I had the ideal kart to win and I did it. I know that this might not be the case in the next race because it is difficult to dream of such a perfect meeting, but I am still very confident.”

Provisional standings of the 2021 FIA Karting European Championship – KZ2 after the first round in Wackersdorf. 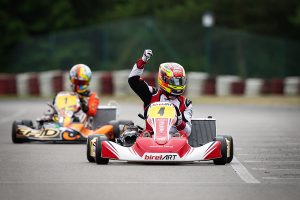 Émilien Denner (FRA – Intrepid/TM Racing/MG) had the best odds at the start of the final of the first round of the FIA Karting European Championship – KZ after his pole position and his domination confirmed by a third victory on Sunday morning. Everything was settled at the start of the decisive race. Riccardo Longhi (ITA – Birel ART/TM Racing/MG) got off to a perfect start to the race, while Denner found himself in a worse position, fourth behind Jérémy Iglesias (FRA – CRG/TM Racing/MG) and Alex Irlando (ITA – CRG/TM Racing/MG). The suspense was in seeing if Denner could close the gap. He was not far behind, always the fastest on the track and not making any mistakes. But Longhi managed to keep a sufficient margin to win under the chequered flag. Irlando took third place ahead of Stan Pex (NLD – KR/TM Racing/MG) who made an impressive comeback from ninth on the grid. Adrien Renaudin (FRA – Sodi/TM Racing/MG) also had a great final, reaching the top five with a gain of five places.

Longhi did not hide his joy on the podium: “I knew that my only chance to win was to make a better start than Denner. Once I took that crucial step, I had to get as much of a lead as possible while he passed the two drivers between us. I gave it my all every moment of the race without giving a single glance to my mechanics. We were not as confident as we wanted to be on this track. I fought from start to finish against a very strong opponent. This victory is a bit unexpected, but it is fantastic for me and for the whole Birel ART Racing team after a difficult weekend.”

Provisional standings of the 2021 FIA Karting European Championship – KZ after the first round in Wackersdorf.

Full results from Wackersdorf can be found on the official FIA Karting Championship app for mobile devices and on the website www.fiakarting.com. 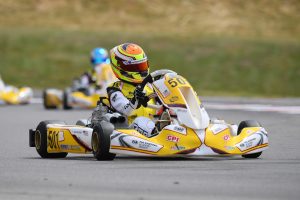 Representing the United States of America in the Academy Trophy program is North Carolina’s Caleb Gafrarar. USA comes in as the defending champion country thanks to the effort and performances by Connor Zilisch. Gafrarar is up to the challenge of making a name for himself in Europe, locked in for a near full season over the Atlantic as mentioned in our EKN article.

Gafrarar made his presence known throughout the weekend and showed the pace to be toward the front of the field throughout the four days of competition. A total of 48 drivers took to the German track, with Gafrarar finishing inside the top-10 in every session. Qualifying was the final session on Friday, with Caleb ending up fifth in his group and his time was sixth quickest overall, however, the format put him ninth overall. That aligned him into Group A for the heat races, starting from inside row three. Gafrarar improved in the opening two, placing fourth before ending up sixth in his third and final heat.

Caleb was classified fifth in heat points to line him up on the inside of row three for the main event. He advanced up to third on the opening lap of the Final, and held there until lap eight. Falling to fifth, the second half of the race was not in Gafrarar’s favor, dropping two more positions to end up seventh at the checkered flag.

“We had a great weekend, just struggled with an engine problem in the Final,” Gafrarar told EKN. “I feel we will do a bit better at the next event. I’d like to thank Danny Drew, who was my mechanic, he did a great job this weekend.”

As stated above, Gafrarar left Germany sitting fifth in the overall points championship. The FIA Karting Academy Trophy program utilizes the heat standings toward the overall championship along with results from the Final. A maximum amount of 35 points are up for grabs with Gafrarar earning 15 over the weekend. He trails Round One victor by 20 points heading to the next event, scheduled for August 12-15 at Adria International Raceway in Italy.

A more in-depth review of Gafrarar’s weekend in Germany will come in a new Driver Diary article written by Caleb himself in the next few weeks.