Exciting weekend at Speedsportz to begin summer stretch of schedule 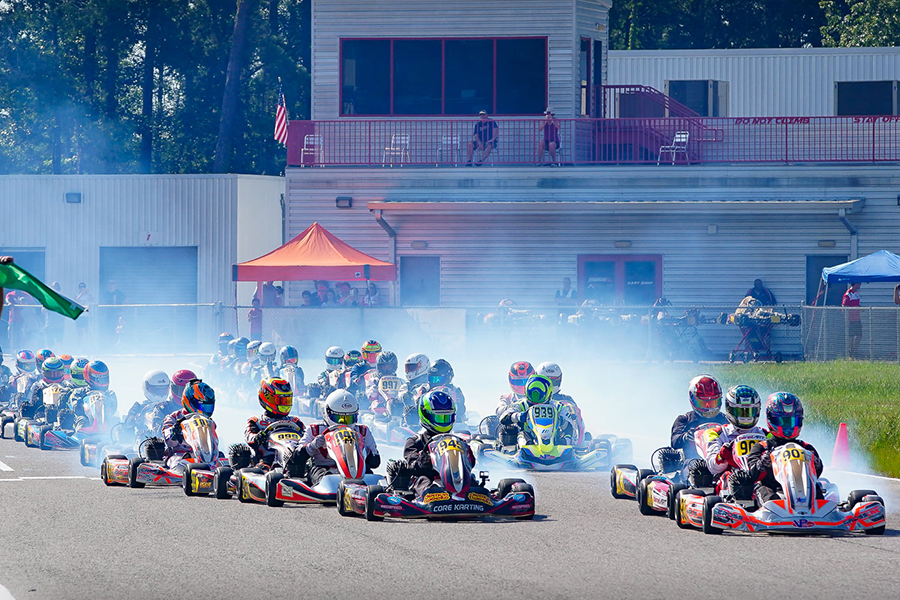 The Texas Sprint Racing Series Presented by Texas Barge reached the halfway point of the 2021 season after hosting the Summer Shootout weekend at the Speedsportz Racing Park. A total of 168 entries converged on the New Caney, Texas over the June 11-13 weekend, hosting Round Three of the 2021 championship program. 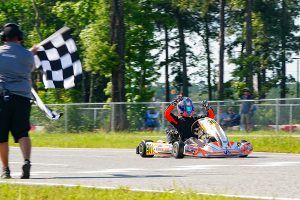 The Exertech KA100 Senior category matched the record-setting total from NTK with 40 drivers competing at Speedsportz. All were chasing one driver – Branyon Tiner. The former series champion swept the two-days of competition, which began with Tiner clearing the field by three tenths of a second in qualifying with a 55.231. The field was split up into three groups for the heat races. Tiner won both his 14-lap heats by over three seconds each while Peyton Phillips won the other heat race. It was a fight for second all weekend as Tiner ran away with the lead in the 19-lap Final, going wire-to-wire for his first victory of the season, becoming the third different winner on the year. Second place went down to the checkered flag with Round Two winner Alex Stanfield able to edge out Jake French for runner-up. Brandin Warwas crossed the line just ahead of Phillips with defending champion Austin Osborne in sixth. 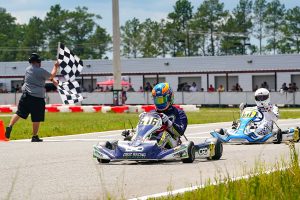 It was a three driver battle all weekend in the 206 Senior class presented by 4T Concrete Pumping, featuring 20 drivers. Defending champion and Round Two winner Ethan Wolfe set fast time in qualifying, edging out Barry Peel by six thousandths with Round One victor Adrian Cruz only 11 thousandths off. Peel was able to win both heat races, the first just ahead of Cruz and then holding off Wolfe to secure the pole position for the main event. Cruz, starting third, moved up to the lead by lap two and never relinquished the top spot. Peel kept on the pressure the entire 18-lap distance, recording the fast lap of the race, only to come up short at the checkered flag as Cruz won his second main event of the season. Wolfe was alone in third with Aidan Smith and Zander Rogers completing the top-five. 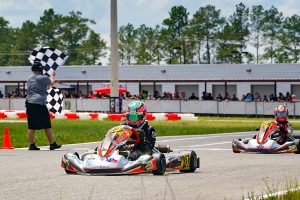 The KA100 Junior presented by Fullerton Motorsports class welcomed 25 drivers, and a third different winner on the year. Noah Baker set the pace in qualifying, edging out Helio Meza by just 12 thousandths of a second. That would be the only session Meza did not finish in the P1 position. Both heat races were battles to the very end with Meza able to finish first in both. Cooper Shipman led the opening lap of the 20-lap Final, and that was his only lap at the point with Meza taking back the top position. Meza paced Shipman for the remainder of the race to secure his first victory of the season. Round Two winner Aden Rudolph joined them on the podium for third with Brayden Robertson in fourth and Camryn Reed finishing fifth. 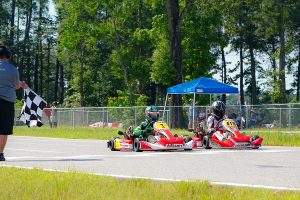 The two winners on the season in the 206 Junior presented by Core Karting division did battle to become the first two-time victor on the year. Round One winner Caiden Wolfe struck first, setting fast time in qualifying. Round Two victor Philip Winegeart was third in the session, but fought forward to earn the win in Heat #1 as Wolfe fell to third. Wolfe then duplicated that feat in Heat #2, driving to the race win from third. The two went back and forth throughout the 18-lap Final. It came down to the wire with Wolfe edging out Winegeart by 19 thousandths of a second. A starting infraction on Winegeart – who posted the fast lap of the race – docked him three seconds but kept him in the second position. Robert Warren Jr. was third with Koen Summers and Alex Pope completing the top-five. 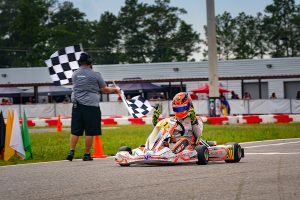 Miguel Mier extended his perfect score on the 2021 season in the KA100 Master presented by Kart Racing Solutions category. Mier was P1 in all four sessions on the weekend, matching his performances at NOLA and NTK. Mier went wire-to-wire on the day, posting a 10-second victory in the Final. Martin Stone drove to second with defending champion Doug Foxworth holding off Edwin Ruiz de Val and Matt Berendt for the third position.

It is now three wins in a row for Ragan Saville in the 206 Cadet presented by Saville Electric class. Saville completed a complete sweep on the weekend, finishing P1 in all the sessions at Speedsportz. He cleared the 20-driver field by four tenths in qualifying, and went wire-to-wire in both heat races and the 17-lap Final. Derek Wargo won the fight for second ahead of Carson Barry. Aston Wyatt was fourth and Robert Arana in fifth. 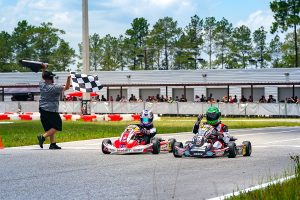 Saville was able to double up on the weekend, winning the Mini Swift class presented by Alan Rudolph Racing Academy class as well. In qualifying, Saville was able to edge out the 18-driver field, with the top-four separated by 78 thousandths. Qualifying fourth was Diego Guiot. It was Guiot who won both heat races with Saville in second. The two went back and forth throughout the 19 laps, with the race decided at the line. Saville edged out Guiot by 67 thousandths for the victory. Guiot – who posted the fast lap of the race – was penalized three seconds for a starting infraction. He would still be classified second with Landon Skinner winning the fight for third ahead of Santiago Duran. Tyler Roberts rounded out the top-five. 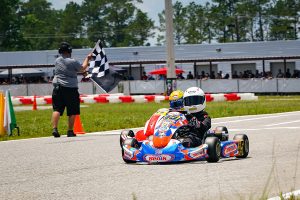 The Micro Swift category presented by PFX Storm Shelters also welcomed its third different winner. Gage Bailey finished the opening two rounds in the fifth position. At Speedsportz, Bailey was able to complete a perfect score to sweep the third round of the series. Bailey posted the fast time in qualifying and won the two heat races by leading green to checkered in both. In the Final, Round Two winner Bobby Klein was able to challenge Bailey for the top spot. In the end, Bailey was able to hold on to the top spot for his first victory ahead of Klein. Behind them was a great battle for the third spot, earned by Nicolas Orbezo with Tyrone Kemper Jr. and Alex Chandler. Matthew Dukette was sixth, with all four drivers crossing the line within four tenths of each other. 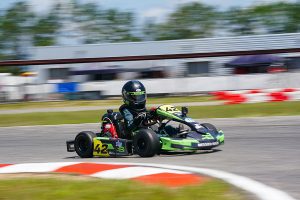 Pasha Ali won for a second straight time in the Honda Kid Karts by A&M Excavating class. Ali was top qualifier and won the opening heat race. A technical issue took the win away from Ali in Heat #2, but fought back in the main event quickly. Within one lap, Ali was into the lead and stayed there until a red flag cut the race short. Ali earned a second victory on the season with Colton Schniegenberg classified second and Andrew Anastasio in third. Round One winner Tanner Barsch was fourth with Aloy Steinbrunner in fifth.

The Texas Sprint Racing Series is set for a return to the Speedsportz facility to complete Round Four, schedule on the July 23-25 weekend. Registration for the ‘Midsummer Mashup’ opens on Monday, June 21 with more specifics to be released in the coming days. Be sure to follow TSRS on Facebook and Instagram, and get details on everything at www.texassprintseries.com.