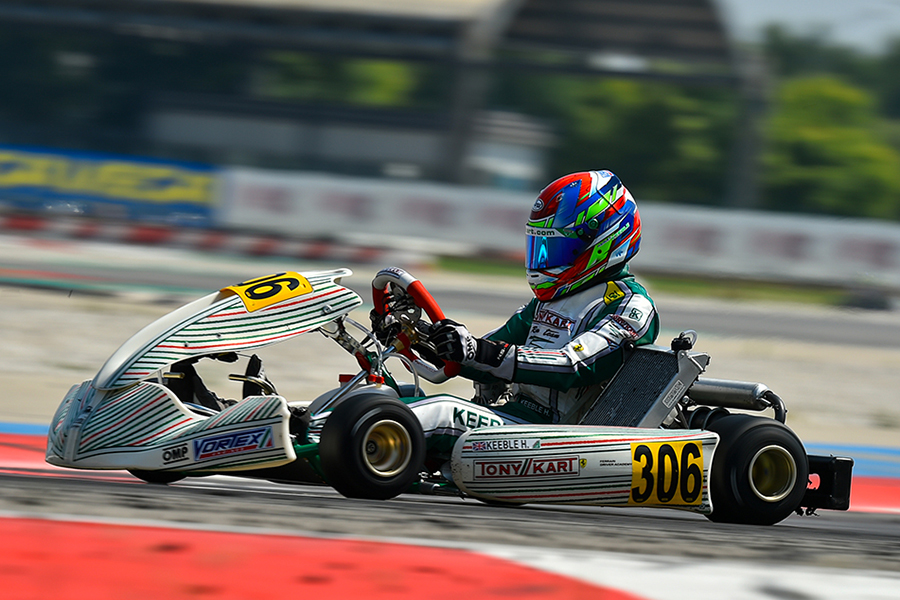 With a top 5 in the second round of the season at the Adria Karting Raceway, our driver Harley Keeble climbs to the first place in the championship standings of the OKJ class.

The second round of the WSK Euro Series opens a month full of commitments for our Tony Kart Racing Team. On the sunny weekend at the Adria Karting Raceway, our Tony Kart Racer 401R, for the KZ2 and OKJ categories, and our Tony Kart Rookie 2020, for the MINI class, perform well in the high temperatures of the track, as well as did the Vortex engines mounted on our chassis.

In OKJ, Harley Keeble is the author of a clear recovery of not less than 32 positions in the qualifying sessions and the eliminatory heats and in the pre-final he gains another 8 positions which translates into the victory and the consequent pole position for the final. The British driver performs a perfect start as the traffic lights goes off and leads the race in the first laps, to then finish in fifth place which takes Keeble to the lead of the championship standings. Right behind the English driver, on the finishing line is James Egozi: the American is the protagonist of a good weekend, with three top 5 positions in the qualifying heats and the top 10 in the overall standings before the pre-finals.
Jan Przyrowski continues his growth within our Racing Team and improves of 15 positions in the ranking at the end of the qualifying heats and, in the pre-final, gets the pass to enter the last race of the weekend. Unlucky, instead, our Alexander Gubenko, involved in an accident on the first lap in the final: the Russian was coming from 11 positions gained between qualifying and eliminatory heats, with two podiums and a total of four top 5 positions. Finally, Jimmy Helias is promoted from the MINI to the “Junior” class and grinds out important kilometres for the next events.

In KZ2, all our five drivers are present at the start of Sunday’s final. Despite the eighth position on the starting grid of the final, Simo Puhakka manages the start with a lot of experience and keeps the eighth place until the chequered flag, penalized by a track that does not offer many overtaking opportunities. The Finnish driver is concrete not only in the final, but also in the rest of the weekend, with 8 positions gained at the end of the qualifying heats compared to the qualifying, thus showing off his potential.
Two penalties for the incorrect position of the front fairing for Lorenzo Camplese and Noah Milell: the Italian driver is among the best 15 drivers without the 5 additional seconds, while the Swedish driver – at his debut with our Racing Team in 2021 – even signs the fifth best time of the final. Gilles Stadsbader and Josef Knopp regain confidence with the track of Adria, in view of the next round of the FIA Karting European Championship in Wackersdorf, Germany.

First steps for Ethan Lennon with our official colours in the MINI class. Out of 82 drivers, the South African driver initially occupies the top 30 at his debut in a continental competition. After this new experience, Lennon is already to face the next scheduled events.

No break for our Tony Kart Racing Team: from June 17th to 20th, we will be busy with the first round of the FIA Karting European Championship for the KZ and KZ2 classes in Wackersdorf, Germany.