Second Round of WSK Euro Series Won by Kremers, Lindbald, Slater and Olivieri 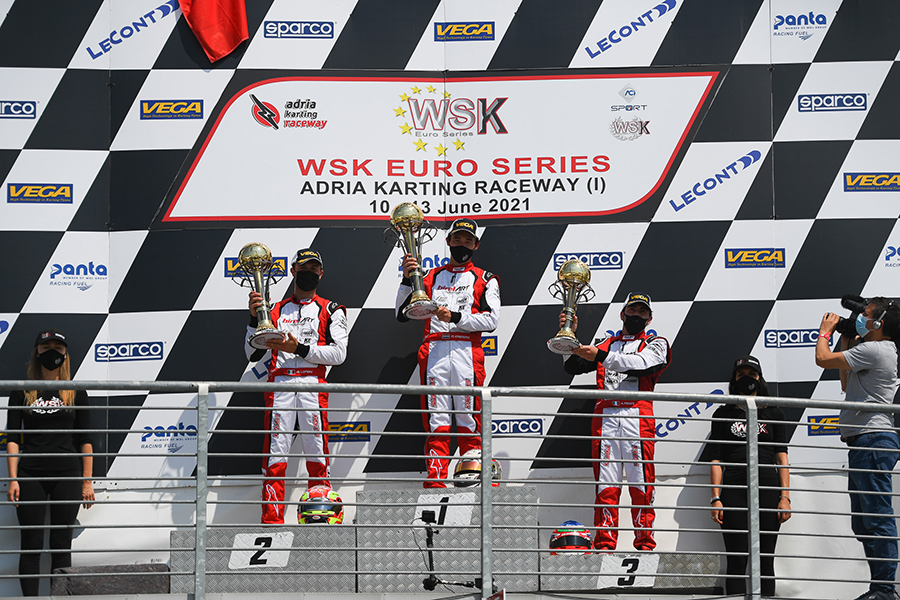 The second round of WSK Euro Series has been successful again at the Adria Karting Raceway that welcomed 220 drivers coming from 48 countries to contest MINI, OKJ, OK and KZ2. The main protagonists of the weekend in Adria came to the fore in the Prefinals held in the morning, and then the winners of this Euro Series round were decided in the afternoon. These were the Dutch Marijn Kremers (Birel ART Racing/Birel ART-TM Racing) in KZ2, the Brits Arvid Lindblad (KR Motorsport/KR-Iame) in OK and Freddie Slater (Ricky Flynn/Kosmic-Vortex) in OKJ, while the Italian Emanuele Olivieri (Formula K Serafini/IPK-TM Racing) claimed the victory in MINI.

The result of Prefinals.

In MINI, the Italian Emanuele Olivieri (Formula K Serafini/IPK-TM Racing) won Prefinal-A as he managed to find his way past the Czech and current classification leader Jindrich Pesl (BabyRace/Parolin-Iame) in the closing stages, who dominated the qualifying stages. Prefinal-B was won by the Spaniard Christian Costoya (Parolin Motorsport/Parolin-TM Racing), who proceeded the other Italian Davide Bottaro (AV Racing/Parolin-TM Racing). The latter came to the fore in this round and was followed by the Colombian Matias Orjuela (Parolin Motorsport/Parolin-TM Racing), who was fifth recovering several places.

The OKJ Prefinal-A went to the Brit Harley Keeble (Tony Kart Racing Team/Tony Kart-Vortex) as he recovered 8 places and secured the win. He was followed by the Swiss Enea Frey (Ricky Flynn/Kosmic-Vortex) and the Jamaican Alex Power (KR Motorsport/KR-Iame). The dominator of the initial stages of the weekend in Adria, the Dane David Walther (Koski Motorsport/Tony Kart-Vortex), slipped down to P12 instead. The Brit Freddie Slater (Ricky Flynn/Kosmic-Vortex) won Prefinal-B from Slovenia’s Mark Kastelic (Forza Racing/Exprit-TM Racing).

Kremers dominates KZ2 and pulls away in the classification. 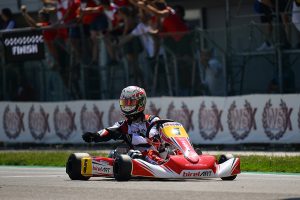 The Dutch Marijn Kremers (Birel ART Racing/Birel ART-TM Racing) dominated the KZ2 final and increased his lead on top of the classification. Kremers led the race from lights to flag proceeding his teammates from Italy Riccardo Longhi and Alessio Piccini, that joined him on the podium in the order.  The fourth place went to another Italian driver of Birel ART Giuseppe Palomba, who kept the position all the way to the flag, leading Paolo Ippolito (CRG Racing Team/CRG-TM Racing) and Francesco Celenta (Parolin Motorsport/Parolin-TM Racing). The seventh place went to the French driver Emilien Denner (Intrepid Driver Program/Intrepid-TM Racing and the eighth to the Finn Simo Puhakka (Tony Kart Racing Team/Tony Kart-Vortex).

Lindblad confirms his lead in OK. 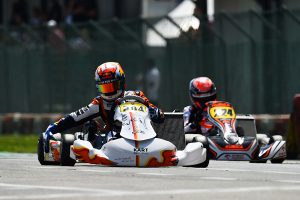 In the OK final, classification leader Arvid Lindblad (KR Motorsport/KR-Iame), completed a good race and was followed at the flag by the Pole Timoteusz Kucharczyk (BirelART Racing/RK-TM Racing), while the third place went to the Norwegian Martinius Stenshorne (Leclerc by Lennox/Birel ART-TM Racing), who got some ground back from the third row on the starting grid. The American Ugo Ugochukwu (KR Motorsport/KR-Iame) recovered up to P4, while the Peruvian Rafael Modonese (Praga Racing Team/Praga-Iame) was fifth and proceeded the Japanese Rintaro Sato (Ricky Flynn/Kosmic-Vortex). This victory allowed Lindblad to stay on top of the classification and to pull away from his rivals.

Slater wins OKJ and closes in on Keeble in the standings. 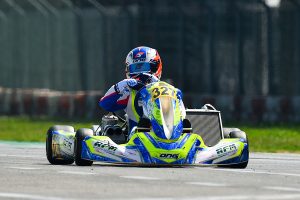 The British driver Freddie Slater (Ricky Flynn/Kosmic-Vortex) took the lead of the OKJ final early from his fellow-countryman Harley Keeble (Tony Kart Racing Team/Tony Kart-Vortex), who lost some ground instead. Slater set a great race pace all the way to the flag that he crossed as the first, followed by the great Slovenian Mark Kastelic (Forza Racing/Exprit-TM Racing), who started from the second row of the grid, and by the Swiss Enea Frey (Ricky Flynn/Kosmic-Vortex). The fourth place went to the Russian driver Kirill Kutskov (KR Motorsport/KR-Iame), while Keeble was fifth and kept the classification lead, but Slater closed in on him. 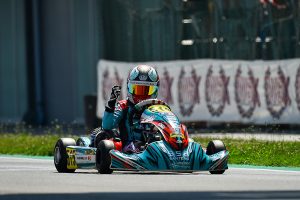 The next round will be on June 27th at the International Circuit Napoli in Sarno (Salerno – Italy).

A total of 12 drivers with ties to North America compete this weekend in Adria in three of the categories. Ugo Ugochukwu (KR Motorsport) was the lone USA driver in OK, qualifying fifth. Two bad heat races dropped him down to ninth for the start of the Prefinal. He moved up two positions to start inside row four for the Final. Ugo jumped up to fourth right away, and stayed there for much of the 20-lap Final, crossing the line one spot short of the podium.

Six drivers representing USA competed in OKJ, with four making the main event. James Egozi (Tony Kart Racing Team) led a trio of drivers with a sixth-place finish. Egozi qualified 20th and worked his way forward throughout the day. He started the Final seventh, moving one spot in the 16-lap race. Behind him was Jamaican Alex Powell (KR Motorsport). Powell was second after qualifying, winning one of the five heat races and ended up fifth in points. He was third in his Prefinal, but fell two spots to seventh in the Final, just ahead of former Challenge of the Americas champion Enzo Deligny (FRA). The Parolin Motorsport driver qualified fourth overall and recorded a heat race win, but two results outside the top-10 dropped him to 19th in the points. He drove forward to sixth in his Prefinal, improving three more positions in the Final. Xander Reed (KR Motorsport) put all four inside the top-15. Reed was sixth in qualifying for his best performance of the year. He placed inside the top-10 in four of the five heat races to end up 26th in points. Reed qualified for the main event with a 13th place finish in his Prefinal, and improved 12 positions in the Final to end up 14th on the day. Caleb Gafrarar (Leclerc by Lennox Racing) and Kai Sorensen (Forza Racing) were unable to make the Final. Gafrarar finished 20th in Prefinal A, three spots short of moving on. Sorensen worked his way up to fifth in Prefinal A after starting 17th, and with three laps to go, suffered contact and retired from the race.

The drivers from North America in the Mini category grew to five for the weekend with three making their international debuts. Of the new drivers, Oscar Iliffe (Parolin Motorsport) made the main event, just ahead of the cutoff for the Prefinal. Iliffe drove up six positions to finish 23rd. Colombian Matias Orjuela (Parolin Motorsport) – the 2021 SKUSA Winter Series champion – led the way in Mini. Qualifying 10th, he finished in the top-seven in four of the five heat races, dropping him down to 24th in points. He advanced up to fifth in the Prefinal to start 10th in the main event. Three more spots in the Final helped him to finish seventh on the weekend. Canadian Jensen Burnett (Energy Corse) had a challenging weekend in the heat races. Starting 33rd in Prefinal B, Burnett improved 14 spots to end up 19th, just missed the Final by two positions. Recent SKUSA Pro Tour Mini Swift winner Jack Iliffe (Parolin Motorsport) made his first WSK start, also missing the main event by two positions with a Prefinal A finish of 19th. Asher Ochstein (Babyrace) also made his debut at the WSK, just a few seconds behind Iliffe in the Prefinal with P27 finish.