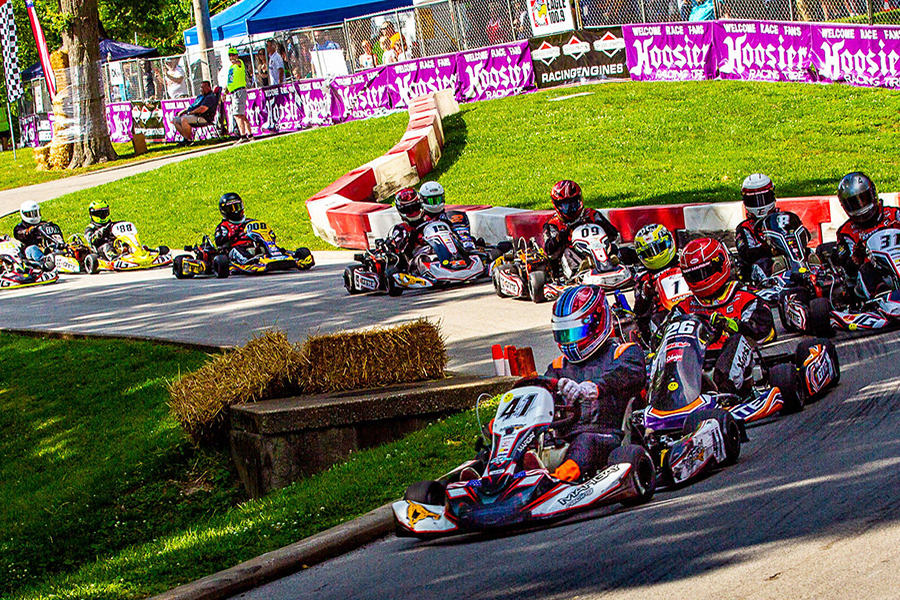 After the 2020 edition was cancelled due to the COVID-19 pandemic, the Quincy Grand Prix returned with a new level of excitement in 2021 this past weekend. Karters from all over the USA converged on Quincy, Illinois for the 35th time since 1970 to compete in a two-day festival in the South Park, or as many refer to it as ‘The Park’. A total of 374 entries set a new record over the last three editions of the race, competing around a 1.125-mile paved course lined with thousands of spectators, watching the four ‘Saturday Sprint’ races and the 11 main events on Sunday. All the drivers in attendance were chasing the coveted ‘Gussie’ trophy – honoring the late Gus Traeder who first began promoting the Quincy Grand Prix.

Just like the event, drivers were making history of their own on the weekend. Tony Neilson remains the true ‘King of the Streets’ in karting, adding to his win total on city streets in the Midwest. Neilson climbed up the win total for the Quincy Grand Prix, adding three wins to make it seven total at ‘The Park’ to move into a tie for eighth overall. His first three wins came in 2018 with victories in Briggs 206 Heavy, Briggs 206 Masters, and Yamaha Masters. He repeated in 2019 in the latter category as his only win. Neilson went 3 for 3 in the Briggs 206 divisions for 2021, seizing the wins in Medium, Heavy and Masters. 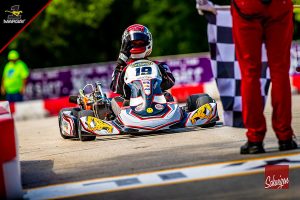 Briggs Medium was the first victory on the day for Neilson, starting the main event in second. Eli Fox was able to edge out Neilson and the of the 16 driver field by 59 thousandths of a second in qualifying. Tony led the opening lap but was shuffled down to seventh by lap four, by that time, two-time defending race winner Riley Scott advanced from sixth to lead the way. Scott led everything up to the final circuit. By then, Neilson fought his way up to fourth. In a wild last lap, Neilson was able to beat Scott to the checkered flag by just 79 thousandths, earning his first win in the category. Fox ended up third with Adam Klingele and Avery Scott completing the top-five.

Briggs Masters – with 22 drivers – was next on the hit list for Neilson on Sunday, leaving the grid in from the pole position over multi-time winner Jeff Dolian. The two Margay drivers were able to check out from the rest of the field, with Neilson leading all 12 laps for his second victory in three years in the class. Jeff Scott had fast lap of the race in third, ahead of Matt Krechel and last year’s winner Michael Welsh. 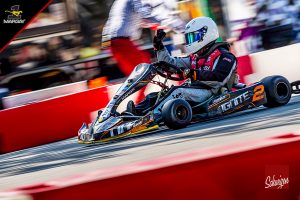 Two races later was the Briggs Heavy main event featuring the event high 42 entries, this time with Dolian on the pole position and Neilson starting second. A group of drivers joined them at the front of the field, with Tony jumping out to the lead on the opening circuit. Neilson would lead all 12 laps, holding off Dolian at the line by 75 thousandths of a second. Riley Scott was third with Matt Krechel fourth and Ashton Wheeler in fifth.

Those three classes helped to build up the excitement for the Pro Briggs division toward the end of the day, as 31 drivers fought for the $2,500 purse to the top-seven. Avery Schwalm was the driver to beat after setting fast time in qualifying on Saturday. A large lead group formed early with second-place qualifier Trevor Eggemeyer jumping out to the lead. Schwalm found himself down to fourth with three laps remaining. He continued to keep the leaders close. The race was decided in a run to the last corner with the drivers spreading out to three-wide. Schwalm was able to get the inside line and get help from Avery Scott, who started back in 16th. Scott helped push Schwalm to the line first, taking home the $750 first-place check. Eli Fox was also able to work past Eggemeyer for the third spot with Jeff Dolian in fifth. 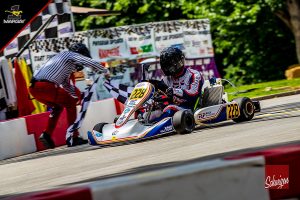 Devon Smith-Harden swept the shifterkart action on the weekend, winning the Saturday Sprint and both main events on Sunday (Photo: Mark Schwigen)

Another driver did win three times on the weekend, moving himself up the overall winner’s list. Shifterkart driver Devon Smith-Harden was able to take the checkered flag in both main events on Sunday while winning the Saturday Sprint to complete the sweep. The first Gussie on Sunday came in the Pro Shifter 125 class where Race Liberante started from the pole position. Liberante and Smith-Harden were the only drivers into the 59-second mark in the main event. It was Liberante leading the first seven laps until a mechanical issue with the rear sprocket forced him to retire. That allowed Devon to cruise to a nine-second victory and the $750 payday over Phil Smith. 2018 winner Joe Ruch came from last in the 20-kart field to end up third, ahead of Bryan Smith and Cody Beck.

The Pro Shifter Open class was the final main event of the 2021 Quincy Grand Prix. It was set to be Liberante and Smith-Harden on the front row when the green flag waved and the 21 drivers launched off the grid. However, Liberante pulled off prior to getting into his P1 position with a mechanical issue regarding the engine stop. This opened the door from Smith-Harden to launch unchallenged into the lead. From there, he led all 12 laps to a 14-lap advantage, earning another Gussie and $750 check. Phil Smith drove to another runner-up finish with Jordan Johnson placing third. Bryan Smith added another fourth-place result with Cameron Parr in the fifth spot. 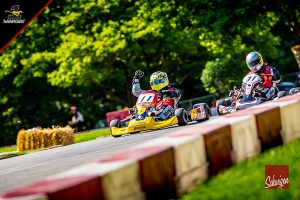 Matt Krechel won at Quincy for the first time since 1998 (Photo: Mark Schwigen)

Two drivers each won a Gussie and a Saturday Sprint in their respective divisions. The first race of the weekend was the Saturday Sprint for Briggs 206 Heavy. Former two-time Quincy winner Matt Krechel was able to claim the opening checkered flag with a wire-to-wire win in the eight-lap sprint ahead of fellow race winner Jeff Dolian. The two were 1-2 in qualifying for the Margay Ignite Masters class with Dolian holding the pole position by just two thousandths. The race came down to just them, with Krechel reaching the line first. It was his first victory at Quincy since winning 4-Cycle Junior Light in 1997 and 1998. Brandin Moore beat out former Quincy winners Keith Scharf and Pete Vetter for the third spot on the podium.

All four Ignite races on the weekend had four different winners, with those winning the main events Sunday taking home their first Gussie trophy. The Ignite Senior class had 25 drivers doing battle, led in qualifying by Avery Schwalm. He was pushed down to second on the opening lap by Gabe Sessler, who led the opening four laps. Schwalm took over for three laps until Matt Krechel led for a lap. Sessler, who fell to fourth at one point, found his way back into the lead with two laps remaining, and was able to hold on at the line for his first Quincy victory. Krechel was second with Dolian in third, recording fast lap of the race. Schwalm ended up fourth with Justin Vancil in fifth. 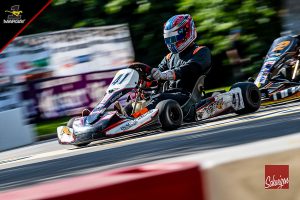 Ignite Heavy – making its Quincy Grand Prix debut with 17 drivers, was another race that went down to the wire. Greg Mefford laid down a lap to record the quick time in qualifying and was among the many drivers in the lead group for the main event. Former Quincy winner Keith Scharf led the field for the opening nine laps until Mefford returned to the point. Halfway through the final circuit, Jeremiah Davis – who started seventh – was able to slip past for the lead. From there, Davis held off the pack to record his first Quincy GP victory and become the inaugural class winner (see video below). Mefford settled for second, beating out Tucker Cory and Schraf. Bryan Strackeljahn completed the top-five.

Jeff Dolian did take a checkered flag on the weekend, winning the Ignite Saturday Sprint, over Trevor Eggemeyer. 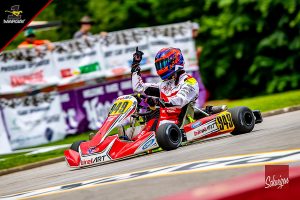 New for the 2021 Quincy Grand Prix was the FK100 division, mixing together the IAME KA100, Vortex VLR100 and Yamaha KT100 engines into one class. Texan Ethan Arndt was able to claim the victory in the Saturday Sprint. Staring the Sunday main event from the pole position, Arndt fell to fifth on the opening lap as Riley Scott led the way. Arndt was able to work back up and take the lead on lap seven, showing the way the remainder of the 12-lap race to become the first winner in the category and winning his first Gussie. Scott drove to second with former Quincy winner Pete Vetter in third, recording the fast lap of the race. Gabe Sessler and Jacob Pearlman joined them on the podium in fourth and fifth.

Drivers of all ages and karts of all ages competed around The Park on the weekend in the Vintage class. Cameron Stock came away with the win in the eight-lap main event on Sunday. Josh Fisher was runner-up with Nathan Hamilton in third. Bob Shiffert and Andrew Fisher rounded out the top-five. 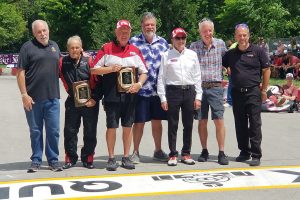 Mike Birdsell and Rick Fulks were inducted into the WKA Hall of Fame (Photo: WKA)

During the opening ceremonies, event announcer and former WKA President Randy Kugler helped to welcome two new inductees into the WKA Hall of Fame. Quincy Grand Prix legends Mike Birdsell and Rick Fulks were honored at the start/finish line with plaques to signify their induction into the organization’s ring of honor. Birdsell is the only driver to ever compete in all 35 editions of the Quincy Grand Prix, recording 14 wins to currently sit fourth in the all-time win list at The Park. His first came in 1972 in American Reed Light, with his last 1994 during the Miller Mile event. Mike’s son Jason, who was in attendance on the weekend, sits fifth in the all-time win total with nine. Fulks, working as the race director on the weekend, is no stranger to The Park, having won four times. He joins both his father Reggie and brother Randy into the WKA Hall of Fame.

Full results can be found on MyLaps.